Would a sufficiently deep cavern on Mars provide habitable temperature and atmospheric pressure?

How deep would a Mars cavern need to be to provide habitable ambient pressure like the 4.5 psi (31 kPa, 232.72 mm Hg) pressure used in ISS EVA suites? Since ISRU advocates propose mining operations it would be elegant if the excavation provided habitat as well.

Same for temperature: it decreases the density of the air locally, but not the pressure of the air above.

Temperature increases with depth. On earth, geological thermal gradients are typically 25 K/km. This puts a limit on maximum depth of human presence.

However, one view https://www.lpi.usra.edu/meetings/geomars2001/pdf/7044.pdf is that Mars is significantly less thermally active than Earth and has ¼ the thermal gradient. This, along with the lower surface temperature, would permit much deeper habitation. The same paper calculates typical geologic depth to liquid water of 5 to 6 km. This implies a local temperature of (very roughly) 0 °C at that depth.

Can the “Dick Tracy” approach theoretically provide habitable temperature and pressure while also protecting from radiation? And would your wrist phone work at that depth?

To get Earth-normal pressure we need 55km

But the deepest we can go looks like 7km

And even if lava isn't a problem the rocks flowing will be. On Earth we abandoned an attempt to drill deep because the hole kept closing up by the time they were 12km down. In Mars gravity that's 31km down.

Thus you're stopped more than 24km above the Earth-normal point. That's the pressure on Earth 18.9km up.

Yes, if the cavern and the mineshaft above it could be filled with perfluorobutane, the cavern could be habitable because that inert greenhouse gas is 5.4 times as dense as CO2 !
To add some sense of reality I've situated the shaft in Nier crater (43.1⁰ N, 106.0⁰ E) because, according to the NASA's Treasure Map for Water Ice on Mars, it has subsurface ice lying 0.2-0.3 m below its floor, so the shaft builders and later on the inhabitants of the cavern could be supplied with water and oxygen.
Furthermore, Nier crater has the lowest elevation of about - 6370 m on Mars between 45⁰ N. and 25⁰ S., and calculated with the Mars Atmosphere Model, the pressure at its floor would be about 1.24 kPa. 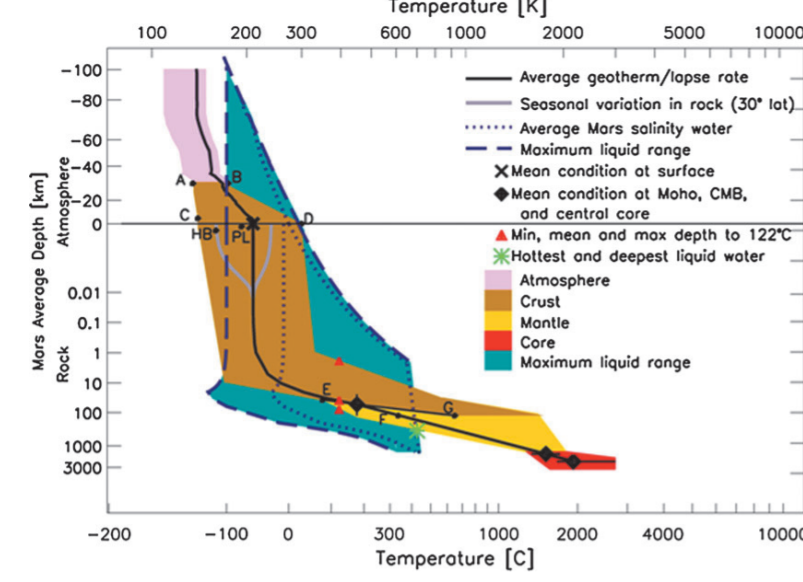 Screenshot of a part of Fig.1 from An Extensive Phase Space for the Potential Martian Biosphere

According to the figure above the temperature of the martian crust rises from -63⁰ C at 1 km below the surface to about 0⁰ C at 10-20 km depth.
To calculate the length of the shaft to reach a breathable pressure in the cavern, I assumed that the transition from CO$_2$ to C$_4$F$_1$$_0$ happens at -7000 m (630 m down into the shaft) to prevent the perfluorobutane to overflow into the crater, and that the temperature there would be -48⁰ C.
At that transition zone the pressure would be 1.3 kPa. and assuming 4 scale heights in series would be sufficient, that pressure would multilply with a factor e⁴, or 54.6, to a breathable 71 kPa.
To proper use the scale height formula we have to take into account the different temperatures at different depths inside the shaft, so for simplicity I assumed every scale height along the shaft would have its own constant temperature, starting at the transition zone with the first scale height to be at -48⁰ C, the following deeper one at -32 °C, then the third at -16⁰ C, and finally the last one at 0⁰ C..
Applying the scale height formula produces then 2113 m, 2263 m, 2414 m, and 2564 m respectively for the 4 successive scale heights, and adding those together with the first 630 m "CO2" shaft length gives a total shaft length of about 10 km !
Looking again at Fig.1 of the article the assumed temperature range seems to fit quite well with the depth range in that figure.
If my calculation was right, the 10 km long shaft with a width of 2.5 x 2.5 m and the cavern at 71 kPa would need 119 tonnes perfluorobutane, so a payload for only one Starship would be sufficient !
But the cavern of course could be much wider than the shaft without adding much mass of the gas and the temperature there could be well above zero because of the produced waste heat.

Not the answer you're looking for? Browse other questions tagged mars atmosphere mining habitat isru or ask your own question.

11
How deep a valley or trench would be needed on Mars to provide the same atmospheric pressure as 6 km above sea level on Earth?
7
What's the deepest a trench could theoretically be dug on Mars?
3
What would be the challenges for a settlement immersed in liquid fluorocarbon on Mars?

4
"Lunar vacuum cleaner": Design considerations for regolith dust suction system in exospheric conditions
13
Are there microclimates with better weather conditions on Mars?
2
What are the temperature and pressure inside the CO$_2$ deposit on Mars?
11
How deep a valley or trench would be needed on Mars to provide the same atmospheric pressure as 6 km above sea level on Earth?
3
What would be the challenges for a settlement immersed in liquid fluorocarbon on Mars?