I am an undergraduate in the Kerbal Academy of Astrodynamics. Patched conics have given me an intuitive understanding of 2-body orbital mechanics. But 3-body problems (like halo orbits) are as mysterious as quantum physics.

I’m hoping that, for small perturbations, an established L2 halo orbit can be treated as a simple harmonic oscillator. This would allow “orbital rules of thumb” that resolve some of the 3-body mystery.

To qualify as a radial harmonic oscillator, we only need to show the restoring force (towards L2) is linearly proportional to displacement from L2.

To demonstrate, consider an idealized 3-body system of Earth, Sun and JWST orbiting at L2. No Moon or Jupiter is present to make 4-body complications. 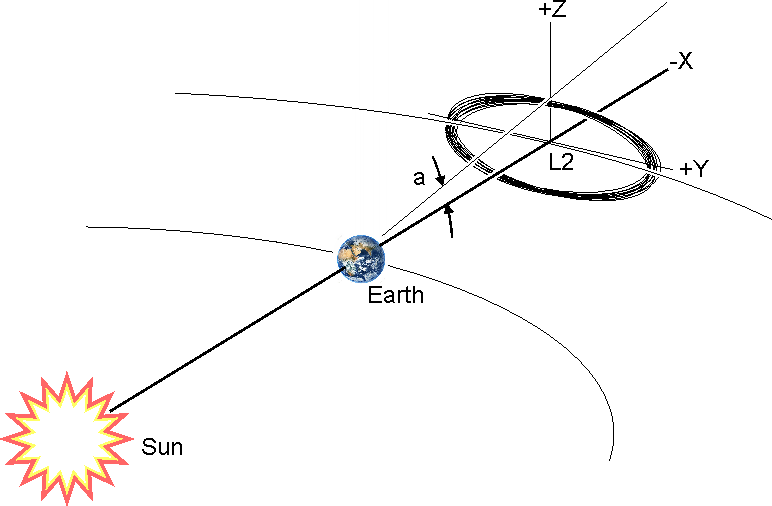 A restoring force proportional to displacement is the central requirement for Simple Harmonic Motion, and for a 2 dimensional Radial Harmonic Oscillator as described by Bertrand's Theorem.

The condition of proportional radial restoring force only holds for the Y/Z plane at L2. Deviations closer (P1) or further (P3) from Earth create a destabilizing component to the R vector along the X axis as in the sketch below

If this Simple Harmonic Oscillator model is valid, the following rules of thumb should apply to small, established halo orbits:

Nice descriptive question with the illustrations! I'll look forward to a more educated answer, but here are my two-cents:

[Edited in response to @Woody's comments]

Looking at the definition of a Halo orbit, it seems to be quite specific and involves all three dimensions and is not a small perturbation: "In 1973 Farquhar and Ahmed Kamel found that when the in-plane amplitude of a Lissajous orbit was large enough there would be a corresponding out-of-plane amplitude that would have the same period."

So it's out of the linearized regime that the paper by Neal Cornish describes. Also that paper describes only in-plane orbits.

However, there are small in-plane orbits for which the harmonic oscillator analogy presumably does apply. In the linearized system in the rotating frame, in plane, two pairs of eigenmodes can be excited. For L2/3, one pair of modes is oscilliatory at a frequency of $\sqrt{2 \sqrt7-1}$ times the orbital frequency (i.e. a period just under six months). This doesn't seem to depend on the mass of the secondary body (in contrast to the Trojans at L4/5). One of the other two modes corresponds to an exponentially increasing drift away from the Lagrange point with a time constant of $1/\sqrt{2 \sqrt7+1}$ or about 5 months.

For L4/5, small coplanar Lagrange orbits are ellipses with a 2:1 aspect ratio elongated along the direction of the planetary orbit. Presumably the orbits around L2/L3 are also elliptical but I don't know how to figure the eccentricity or orientation. In illustrations, the in-plane projection also looks to have about a 2:1 aspect ratio.

Cornish's linearized analysis shows (inevitably) that the period is independent of magnitude for small perturbations. This is certainly indicative of simple harmonic motion in the presence of a linear central force. However, the Coriolis force is a dominant factor in determining the shape of the orbit. So I don't think you have full freedom to set the eccentricity and orientation of the orbit as you would for a simple linear central force (questionable statement).

Again, this is just for very small orbits and ignores their inherent instability.

Perhaps the halo orbit can be thought of as an orbit large enough that the in-plane orbital period and z-axis 'pendulum' period match each other with neither being in their linear harmonic motion regime?

Not the answer you're looking for? Browse other questions tagged orbital-mechanics james-webb-telescope hohmann-transfer halo-orbit three-body or ask your own question.

25
What is the "mass" of a Lagrange point?
14
How to best think of the State Transition Matrix, and how to use it to find periodic Halo orbits?
11
What sort of orbital elements are used to describe halo orbits?
7
Why are Jupiter's trojans even remotely stable?
5
What is the period of halo/Lissajous orbits?
4
Are L1 and L2 orbital periods always half the orbital period of the massive bodies?