Why is NASA choosing such a large “halo” orbit at L2 for JWST?

According to “https://webb.nasa.gov/content/about/orbit.html”, NASA plans to exploit a quarter million mile radius “halo” orbit at L2.

And Webb will orbit around L2, not sit stationary precisely at L2. Webb's orbit is represented in this screenshot from our deployment video (below), roughly to scale; it is actually similar in size to the Moon's orbit around the Earth! This orbit (which takes Webb about 6 months to complete once) keeps the telescope out of the shadows of both the Earth and Moon. Unlike Hubble, which goes in and out of Earth shadow every 90 minutes, Webb will have an unimpeded view that will allow science operations 24/7.

I understand the semi-stable utility to this 3BP solution, but I don’t understand why the radius NASA is showing is so large. Since L2 is beyond the Sun-Earth umbra, there is no chance of hiding from the Sun, but why such a large radius? Is this radius a fuel expenditure compromise? Any smaller, you burn more fuel and any larger, you lose L2 lock?

Answer: to avoid eclipses by the Moon.

See: Why are eclipses of the James Webb by the Earth or Moon not permitted during the mission? . It discusses NASA's decision not to allow any lunar eclipses of JWST.

This NASA document ntrs.nasa.gov/citations/20190028885 states, "Thermal and power requirements state that the JWST mission shall not experience any Earth or Moon eclipses during its entire mission lifetime."

Because L2 is only 2 Moon orbital diameters away from Earth, geometry dictates a "big fat halo" with major axis in the plane of Moon's orbit.

The box in illustration c) indicates potential positions of the Moon which need to be avoided. 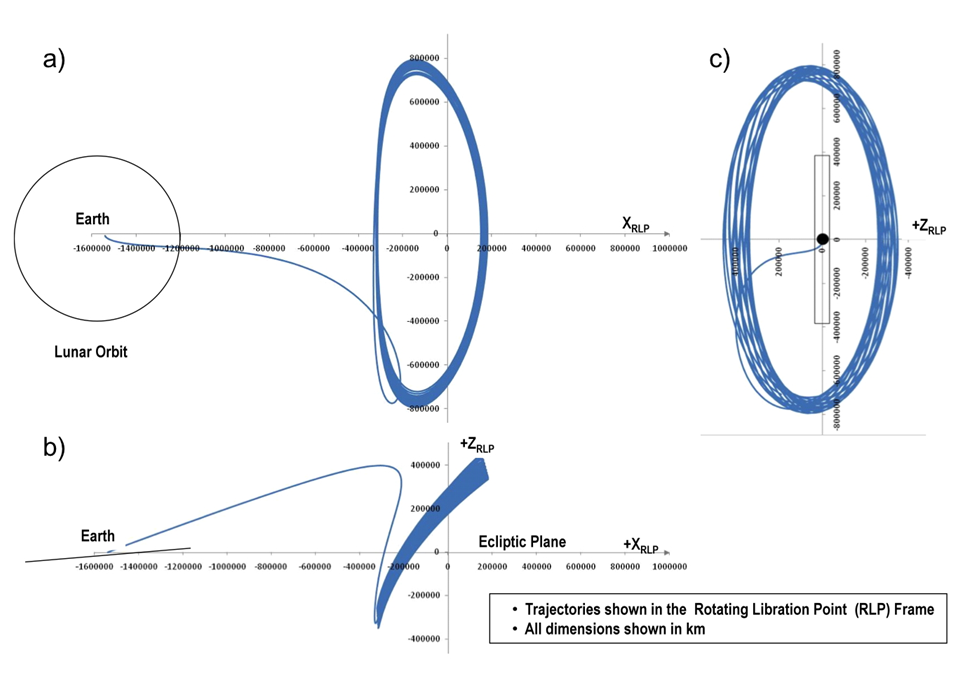 The halo orbit's large diameter restricts aiming of telescope. At extreme Y axis excursion, aiming in the ecliptic plane is limited to prevent Earthlight from peeking around the sunshade.

the leading factor in the NASA citation is... THERMAL!

it is of utmost importance that a super stable thermal environment is provided to the mirror system and instruments. popping in and out of shadows, even the very weak moon shadow, would cause fluctuations in thermal loading to the overall system. Those very minor temperature variations would screw everything up. Primary Mirrors would need constant adjustments. Instrument calibrations would be off. Also, solar wind pressure exerted on the sun-shield would vary, causing more station keeping fuel usage, decreasing useable telescope lifetime.

Not the answer you're looking for? Browse other questions tagged orbital-mechanics james-webb-telescope or ask your own question.

22
Why are eclipses of the James Webb by the Earth or Moon not permitted during the mission?
11
Are large halo orbits around L₁'s and L₂'s preferred over small orbits for reasons other than geometry?
9
Is there any more information available on JWST's "aft momentum flap"

9
How much of the sky can the JWST see?
16
What are the sources of light at L2? How will the James Webb telescope be powered?
8
Why have JWST in a Sun-Earth L2 halo orbit?
22
Why are eclipses of the James Webb by the Earth or Moon not permitted during the mission?
6
JWST Halo Orbits for Dummies: can halo orbits be usefully approximated by Simple Harmonic Motion?
10
Is JWST Halo orbit prograde or retrograde and why?
4
Is this JWST Halo orbit plot fouled up somehow?
5
Is the JWST halo orbit period sync'd with earth's elliptical orbit about sun?