What are the benefits of supersynchronous transfer orbits?

Some satellites are injected into higher apogee than standard GTO apogee of 35 786 km. Next the satellite then has to increase its perigee ( usually 250 km ) to GEO altitude. Then the apogee has to be decreased to GEO altitude.

What is the benefits of this kind of orbital injection? Doesn't this require extra delta-v budget than standard GTO launches?

This is a partially copied answer from this closely-related question:

The other answerer focuses on the straight-up dV savings which occur when you're launching from a very inclined launched site. I'm going to focus on a second reason you might want to do a supersynchronous (new-to-me term) transfer, but first, let me detail how a traditional GTO is used from an inclined launch site.

The reason why the inclination change and perigee raise maneuvers are combined is simple trigonometry--burning diagonally requires less total energy to achieve the same final velocity (not just speed, the direction matters a lot!) than burning one way and then burning perpendicular to that direction. Additionally, this is done at geosynchronous altitude because the satellite is traveling slower there than it was at low earth altitude. Thus, changing direction does not require as much change in velocity (delta-V).

As an example of a supersynchronous transfer orbit, let's consider Arabsat 6a. Falcon Heavy launched Arabsat 6a into a transfer orbit with an apogee of 90,000 km, well above the geosynchronous altitude of 35,786 km. At that altitude, it was traveling very, very slowly, so the combined inclination change and perigee raise burn required even less dV from Arabsat than if it had happened at GEO. But Arabsat would not yet have been in geostationary orbit. It needed to perform one more circularization burn at perigee to slow itself back down and lower its apogee from 90 Mm to geosynchronous altitude.

This kind of supersynchronous, "overshooting" transfer into a higher orbit is not a Hohmann transfer orbit, it is a bi-elliptic transfer. Despite requiring three burns (1: [over]raise apogee, 2: raise perigee, 3: lower apogee) rather than just the two of the Hohmann (1: raise apogee, 2: raise perigee), bi-elliptic transfers can require less dV in some cases. Raising from moderately-inclined LEO to GEO is not (*usually) one of these cases. The total dV required is greater than a traditional GTO, except in very inclined cases. (I was not aware of this when I wrote the original answer; thanks to @BrendanLuke15 for this surprising answer!)

But focusing on the other reason--the reason that Arabsat (which is only launching from the modestly-inclined Cape) used a supersynchronous orbit: the lower-energy burns required of Arabsat to enter GEO from its transfer orbit expended much less dV than the single burn to enter GEO from a traditional GTO.

The difference in energy was made up by Falcon Heavy, which placed Arabsat in the high energy geostationary transfer orbit which threw it out to 90 Mm instead of 35.7ish Mm.

In short, it's asking more of the launcher, but less of the payload. For various market reasons (namely, you're buying a pre-existing vehicle from a launch service provider, instead of building your own), payload owners/builders might find it cheaper to make a much smaller, lighter, and simpler payload which does not have to do the expensive combined GEO-altitude circularization/deinclination burn. This is doubly-so if they're going to be putting it on a large vehicle anyways. While the dV savings may be minimal or negative, there's a relatively large capability gap between mid-to-heavy launchers & smallsat launchers. If you're already buying slightly more rocket than you'll need, why not take advantage of it? It's the same price to launcher either way, but a much cheaper & simpler payload.

As the comments discuss, inclination is the missing variable in the equation.

The standard geostationary launch that you are thinking of looks something like this:

Assuming instantaneous burns, the second burn can be analyzed like this (excuse the crude MS Paint drawing): 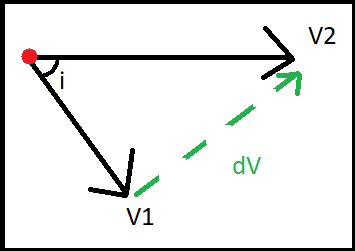 To which the cosine law can be applied to find the $\Delta V$.

This presents the possibility of lowering the $\Delta V$ cost of the plane change maneuver if $|V|$ is lower (i.e., higher altitude). This is what the supersynchronous transfer orbit does. 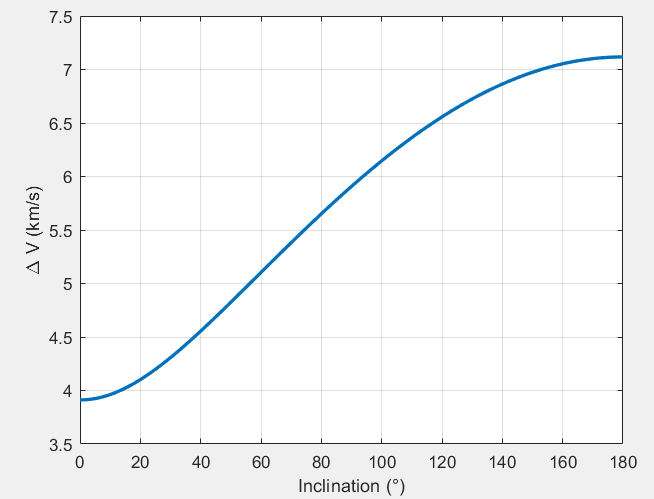 While the total $\Delta V$ costs for the supersynchronous method are: 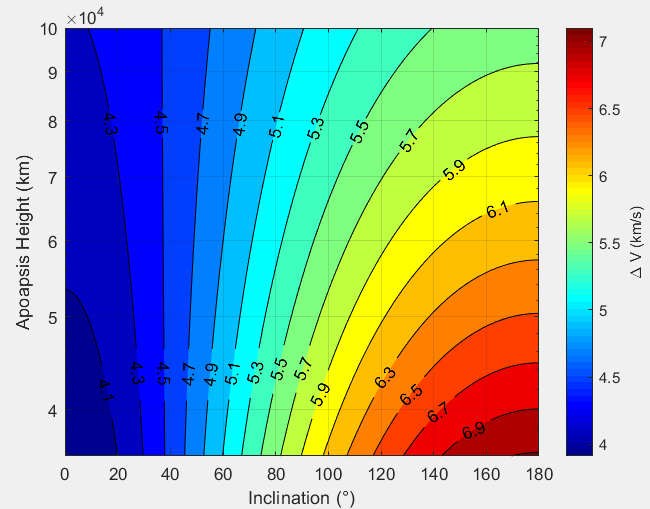 Interestingly, there is an iso-propic (if you will) line at an inclination of ~40° where the total $\Delta V$ cost of the maneuvers is independent of transfer orbit apoapsis (neat!).

The $\Delta V$ is lower for the supersynchronous method in the coloured regions of this plot: 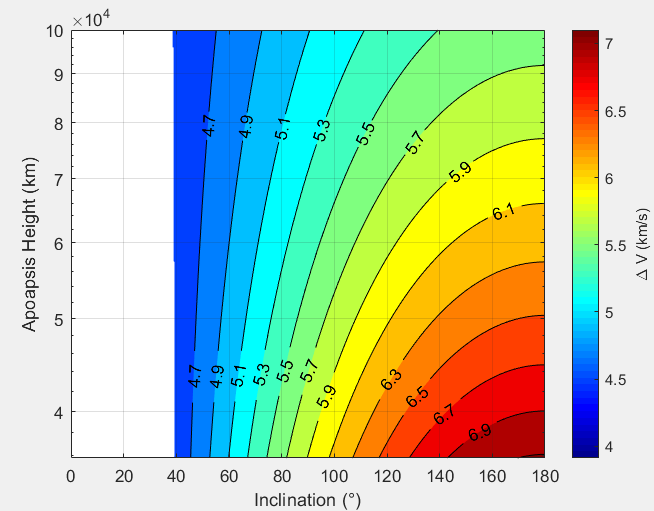 However, when you only consider the maneuvers that the spacecraft is (typically) responsible for (i.e., post injection), it is always equal OR more efficient to use a supersynchronous transfer, though the $\Delta V$ savings are relatively meager for the most common inclinations/launch sites: 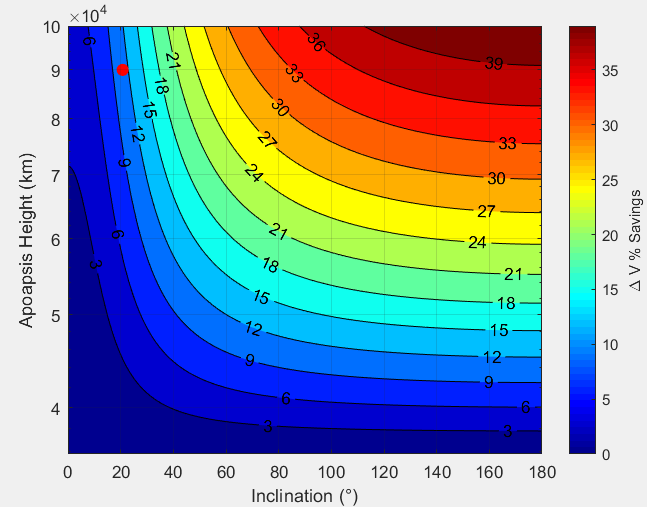 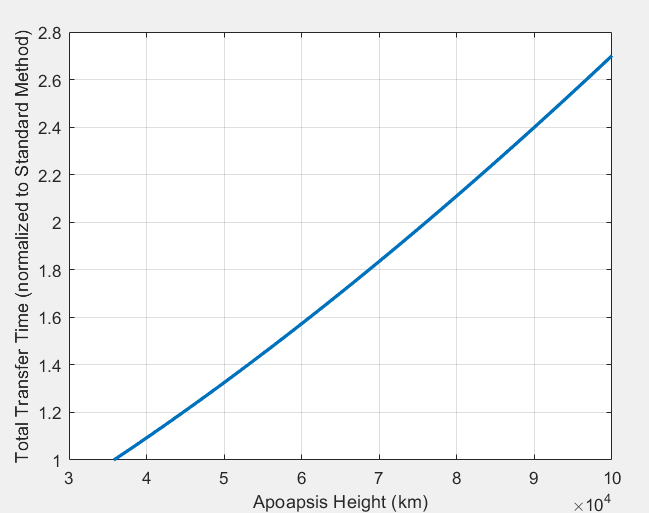 But, as pointedly put in this answer:

and the $\Delta V$ savings are worth more life than they cost.

Not the answer you're looking for? Browse other questions tagged orbital-mechanics orbital-maneuver delta-v geosynchronous supersynchronous or ask your own question.

14
How long does it take for a satellite to reach GEO?
6
Why put SunRISE in the graveyard? Why will it "fly slightly above geosynchronous orbit"?
4
What is meant by "a high-energy geostationary orbit"? (SpaceX Arabsat 6A)
6
When is the supersynchronous orbit more efficient than a typical Hohmann transfer where inclination change and circularization are simultaneous?
7
How can Bielliptic transfers be more efficient than Hohmann transfers?
2
Are there uses for these 'quasi iso-propic' supersynchronous transfer orbits?

12
Could Earth-lunar flybys be repeated consecutively without the use of propellant?
13
Transfer between elliptical orbits
6
Question about the Hohmann Transfer: why does delta-v go down when transferring to a higher orbit?
20
Is the ideal transfer between two arbitrary planar orbits always a bi-tangential ellipse?
3
What is the cheapest possible way to land a crew of 2 on the moon?
4
Calculating the delta V budget from Earth to Mercury
6
When is the supersynchronous orbit more efficient than a typical Hohmann transfer where inclination change and circularization are simultaneous?
2
Are there uses for these 'quasi iso-propic' supersynchronous transfer orbits?
1
Why “super” for supersynchronous orbits? Why not “trans”?