Are there uses for these 'quasi iso-propic' supersynchronous transfer orbits?

The total $\Delta V$ is the sum of all 3 burns (though typically the satellite is on its own for the final 2). Plotting the total $\Delta V$ over a wide range of inclinations and transfer orbit apogees yields this (250 km parking orbit assumed): 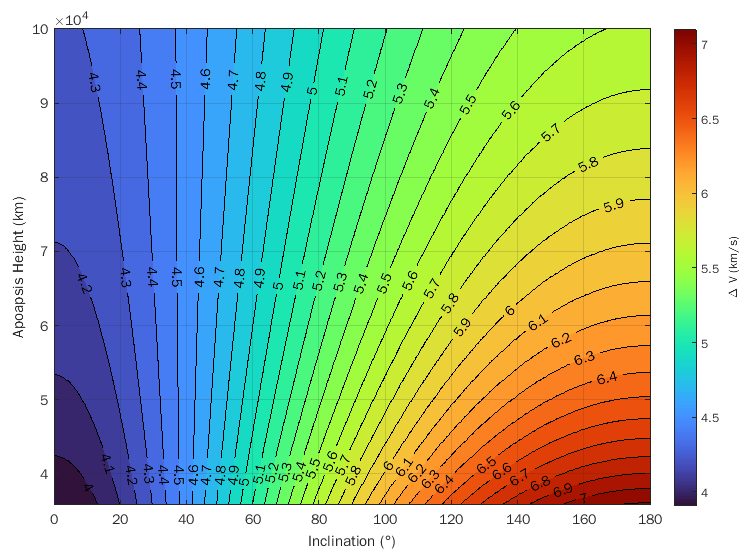 Upon closer inspection there is no proper vertical line/invariant inclination, but these 5 m/s contours show that there is a region of quasi iso-propicness around 39Â° inclination (5 m/s in the scheme of 4+ km/s seems pretty invariant to me): 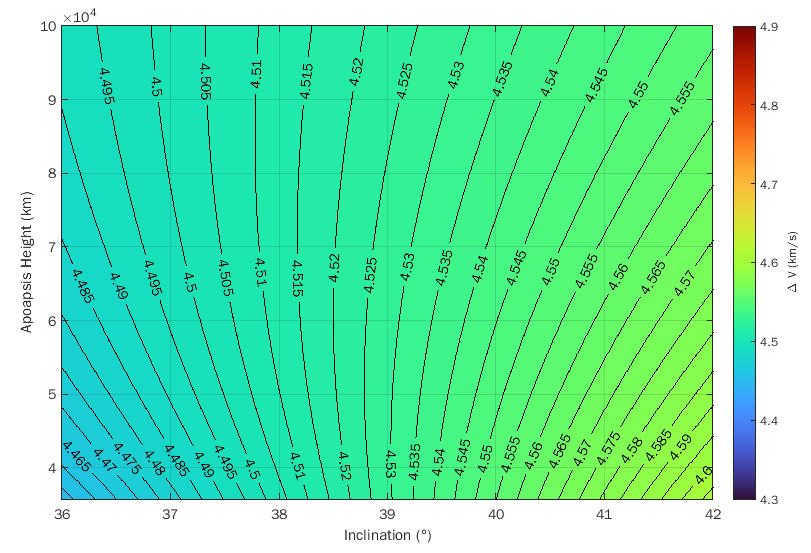 There is no benefit for a traditional upper stage + payload combination because while the total $\Delta V$ stays the same, the distribution between launcher and payload changes by as much as ~20% for the apogee scale shown in the plots.

Consider though, a single spacecraft responsible for all of the (admittedly high) $\Delta V$. Only one transfer orbit apogee can be used per mission, of course. However, is there any reason why sitting in a ~39Â° inclined low Earth orbit with the ability to target geostationary orbit from any transfer orbit apogee would make sense? Even if it does make sense, are there more practical solutions?

Re: Comments, here are the 3 burns individually. The first and last don't deal with inclination and thus only depend on transfer orbit apogee (click to enlarge):

What you are seeing here is the result of the inefficiencies in the orbital transfer strategy employed, in the transition region between direct transfers and bi-elliptic transfers.

When transferring between two circular orbits with some inclination, eventually the "degenerate" bi-elliptic transfer (with infinite apoapsis) will become optimal, provided the target orbital radius or the inclination is large enough.

At that point, it's a flat transfer cost, independent of inclination change:

The other strategy, or course, is to do a direct arc, splitting the inclination change between the two burns (not evenly!).

At ~40Â°, targeting synchronous orbits, you are in the transition region between these two, costs are about the same.

But they have the opposite reaction to increased altitude!

You're using a hybrid approach, which has two theoretical inefficiencies:

With a hybrid approach like that, the altitude-dependent delta-v cost trends will cancel eachother out for some inclination-altitude region, and that's what you have.

Are there uses for these 'quasi iso-propic' supersynchronous transfer orbits?

I do not think so. The only reason to do large inclination changes, like ~40Â°, is to reach synchronous orbits from launch sites not on the equator. But that's only one useful altitude, so the rest of the quasi iso-propic line isn't used.

Not the answer you're looking for? Browse other questions tagged orbital-mechanics delta-v geostationary supersynchronous or ask your own question.

11
What are the benefits of supersynchronous transfer orbits?

4
Is an orbital launch more like a vertical climb or a Hohmann Transfer?
10
How to intuitively explain that reaching geostationary orbits consume more Delta V than escape orbits?
18
What is the optimal inclination change strategy?
1
How to calculate 𝛥𝑣 that required to change orbit with same radius but different inclination?
2
Minimum deltaV between two Orbits (re Jonathan McDowell tweet)
4
Calculating the delta V budget from Earth to Mercury
2
What's wrong with my bielliptic transfer calculation?
11
What are the benefits of supersynchronous transfer orbits?
6
Which of the 2 delta-v calculations for a Mercury orbit insertion from LEO is right and which is wrong?
6
How to attain an equatorial orbital inclination from a non-equatorial launch site?