If one Starship can transport 100 people to Mars, how many could it safely land near Mercury's north pole after one Hohmann-like transfer?

Personally, I would rather live near Mercury's north pole than anywhere on Mars mainly because:

But it's been stated many times that it's so hard to get there because of the proximity of the Sun.

From the BBC news article "What is Elon Musk's Starship?":

"You could conceivably have five or six people per cabin, if you really wanted to crowd people in. But I think mostly we would expect to see two or three people per cabin, and so nominally about 100 people per flight to Mars," Musk said. The payload bay would also host common areas, storage space, a galley and a shelter where people could gather to shield from solar storms, where the Sun belches out harmful charged particles into space.

I really would like to know how many people could be transported to the surface of Mercury's north pole with such a Starship, taking into account the longer trajectory to the aphelion of Mercury's orbit than that to an orbit around Mars.

Please with the necessary calculations to be able to control the assertions in your answer !

I take "after one Hohmann-like transfer" to mean a direct Earth to Mercury interplanetary transfer (i.e., no Venus shenanigans), please let me know if that is not the case.

Unless serious lithobraking is possible, no humans will go to Mercury.

Starship, even with no payload, doesn't have the juice to do anything other than fly by Mercury: 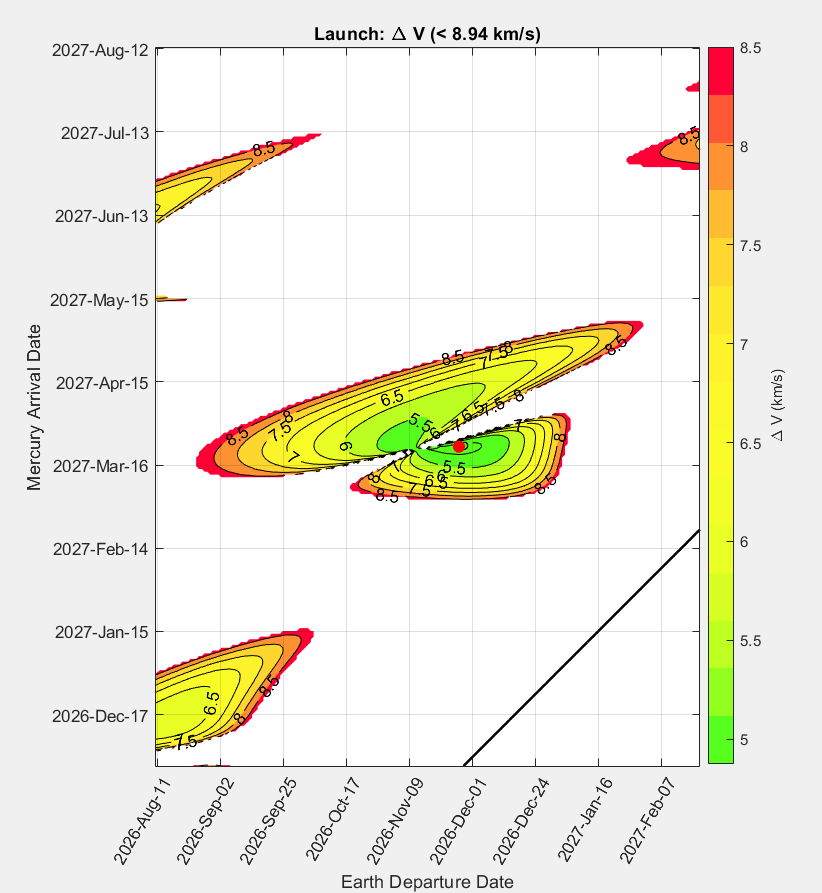 Sounds nice, but the arrival speed (Mercury relative speed @ 0 altitude) for these specific dates is a cool 13.65 km/s (yikes!). In fact, the minimum arrival speed for the period examined is 8.91 km/s, only slightly less (0.3%) than the total $\Delta V$ the payload-less Starship has available.

Edit: A premise of the question is incorrect:

The transfer time to Mercury (for the launch example) is only ~120 days, less than half of a typical transfer to Mars. The minimum arrival speed example uses a longer type III/IV trajectory (I didn't check which & it doesn't really matter), yet is still comparable to a typical Mars transfer at ~330 days.

The delta-v to Mercury is 2.5x greater than to Mars; given the dry mass of Starship I doubt that it could land any payload at all without some heliocentric fuel depot, which would be quite tricky and expensive to set up. This is without taking into consideration that Starship just isn't designed to survive the heat it would absorb by traveling so close to the sun; Mercury-bound spacecraft have to be specially designed to handle the temperatures.

Landing on Mercury is supremely difficult due to how deep Mercury lies in the Suns gravitational well. In addition it has no significant atmosphere so retro propulsive landings would be required making it harder still.

It is very unlikely that Starship would be a good choice for landing on Mercury owing to it's high mass, it can't be ruled out entirely, but it would certainly need considerable modification. Stretched tanks, lowered payload capacity and more.

It would also be necessary to re-tank in a very highly elliptical Earth orbit to maximise it's capability and use a fleet of disposable tankers. But even that might not be enough. Another option would be a series of gravitational assists from the Earth and Venus. That might just do it but at the cost of a very extended mission duration with subsequent problems of crew exposure to radiation and zero gravity, crew life support requirements and the practicality of retaining cryogenic propellants for many years.

In summary. It's not going to happen.

12
Which star could Starship reach soonest?
6
Starting refueled in LEO, how much payload could a heat-protected Starship softly land on Mercury after a gravity assist from Venus?
12
Could SpaceX's Starship's landing and restart process work on Titan?
5
C3 calculation in interplanetary missions
4
Relationship of 'C3' to Delta-V for interplanetary missions
3
Which programs are used to calculate delta V and launch dates to get to other objects?
3
What are Mass Rate(∆v)/∆v, Mass Rate(Isp)/Isp and time of burn(MR)/MR graphs?

13
Mars versus the poles of Mercury WRT colonization