When and why did three-axis stabilization become prominent in geostationary satellites?

Since the very first Sycom 1, geostationary satellites from 1960s to 1980s are cylindrical with solar cells covering the body of the satellite. Such examples include:

This design seems to imply that they are spin stabilized. Which is also corroborated by recollection of Hughes employees, that three axis stabilization was impractical in 1958 due to the number of reaction control thrusters needed.

However, at time of the writing, new geostationary satellites rarely use spin stabilization. The successors to many previously mentioned satellites uses three-axis stabilization instead. Such examples include:

When and why did three-axis stabilization become prominent in geostationary satellites?

Symphonie-A was launched from the Kennedy Space Center on December 19, 1974.

Due to the successful operation of Symphonie A, January 12, 1975, President Valéry Giscard d'Estaing of France and German Chancellor Helmut Schmidt exchange their New Year greetings live in a videoconference. Symphonie-A is the first geostationary telecommunications satellite built and operated in Europe.

Symphonie-B is launched from the Kennedy Space Center on August 27, 1975.

August 12, 1983: Symphonie-A makes its final manoeuvre to a graveyard orbit, and is de-activated after 8+1⁄2 years of service.

December 19, 1984: Exactly ten years after the launch of Symphonie-A, Symphonie-B is also deactivated and placed in a graveyard orbit after nine years of active service.

New technologies which have been developed for the spacecraft subsystems and equipment which is now space qualified include a biliquid apogee motor and a biliquid hot gas system for orbit corrections.

Technology and control principles established and space proven during more than four years in orbit operation of these spacecraft has been adapted, extended and improved for INTELSAT V Attitude Determination and Control Subsystem design. 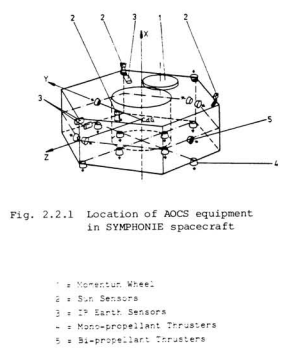 3 axis stabilization from Symphonie led to it being used on Intelsat V: 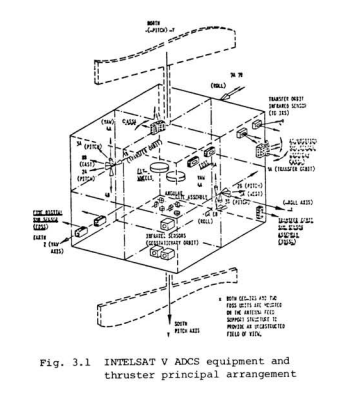 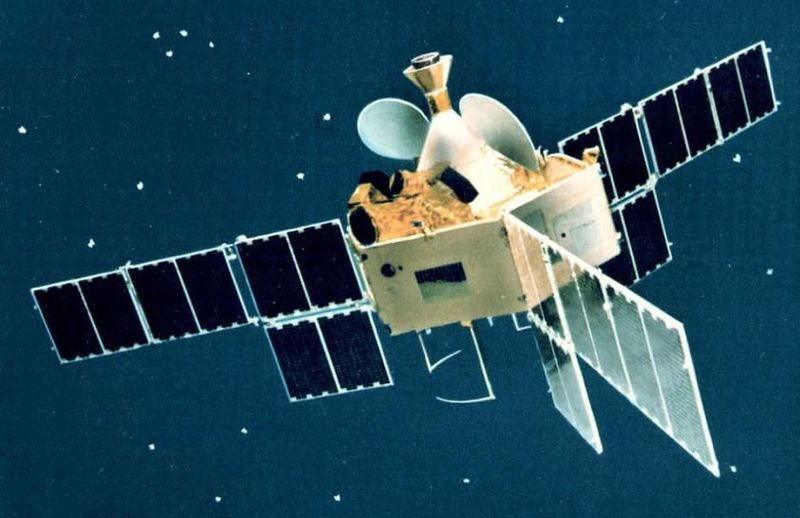 Since 1967 Three-Axis Control of Communication Satellites has been studied and developed intensively in Germany. The principle of the so called Bias Momentum Stabilization, which uses the gyroscopic stiffness of a fast running Momentum Wheel for yaw and roll control, was operationally applied to these 2 satellites for the first time.

The bias momentum method achieves attitude stabilization by attaching a momentum wheel that incorporates an angular momentum inside a satellite.

A disadvantage to this type of stabilization is that the satellite cannot use large solar arrays to obtain power from the Sun. Thus, it requires large amounts of battery power.

With three-axis stabilization, satellites have small spinning wheels, called reaction wheels or momentum wheels, that rotate so as to keep the satellite in the desired orientation in relation to the Earth and the Sun.

Disadvantage of 3-axis stabilization may have to carry out special rotating maneuvers to best utilize their fields and particle instruments.

In general, attitude control concepts have been classified as active, passive, and semi passive procedures.

Recent attempt at purely magnetic control rather than momentum or reaction wheels for attitude control. 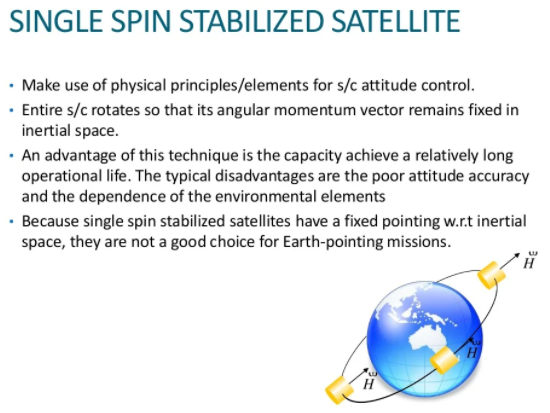 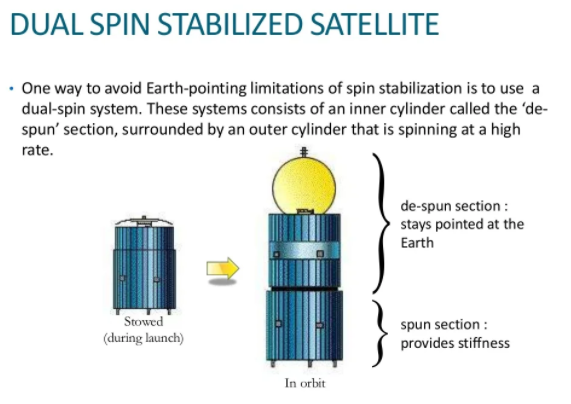 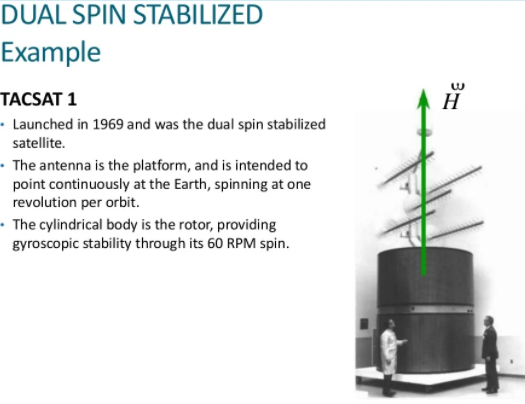 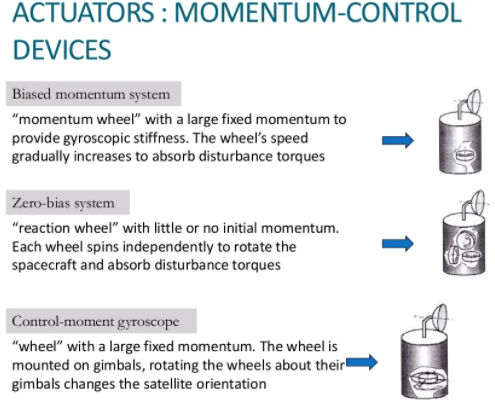 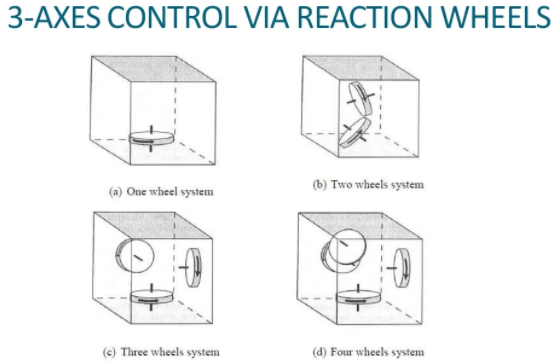 I worked for Hughes Aircraft back in the 1980s when this transition was underway. Hughes built many (most?) of the geosynchronous communication satellites in those days, and they were all spin-stabilized. That approach has several benefits.

First, the attitude is passively stable because the angular momentum significantly exceeds the environmental torques (mostly pressure from solar photons at geosynchronous altitude). Three-axis systems are actively stabilized and require reliable operation of the computer, software, reaction wheels, gyro, and attitude sensors. Back then, that was a challenge. Later, larger dual-spin satellites did need active nutation control, but the hardware was much simpler than that of three-axis systems.

Second, spinner thermal design is simpler. The spinning portions alternate between sunlight and darkness on a timescale of a few seconds (most Hughes spinners spun at 30 to 60 RPM). That spread out the solar heating on the body.

Ultimately, spin stabilized designs could not generate enough power as communications payloads became more ambitious and power-hungry. Geosynchronous communication satellites these days can require over 10 kW of solar array power. Spacecraft solar arrays cost on the order of 1M USD per kilowatt, way more than the ones used on houses (because they use very advanced cell technology with little market demand to drive down prices). A three axis spacecraft mounts the cells on a flat panel and then points rotates the panel to face the Sun more or less full on. A spinner, on the other hand, places the arrays on a cylinder which is only partially illuminated. In fact, you need roughly pi times more solar array area to get the same output as from a flat array. That means you start out with a cost disadvantage of about 20M USD, which is too much in the competitive market. In addition, there are practical limits to how large a cylinder you can launch. Intelsat VI (which I worked on) is close to the max allowed by rocket fairing sizes. Making the cylinder longer was tried as well (on Intelsat VI and others) by deploying a lower cylinder (like a skirt). It worked, but it more or less reached its limits with spacecraft like Intelsat VI. 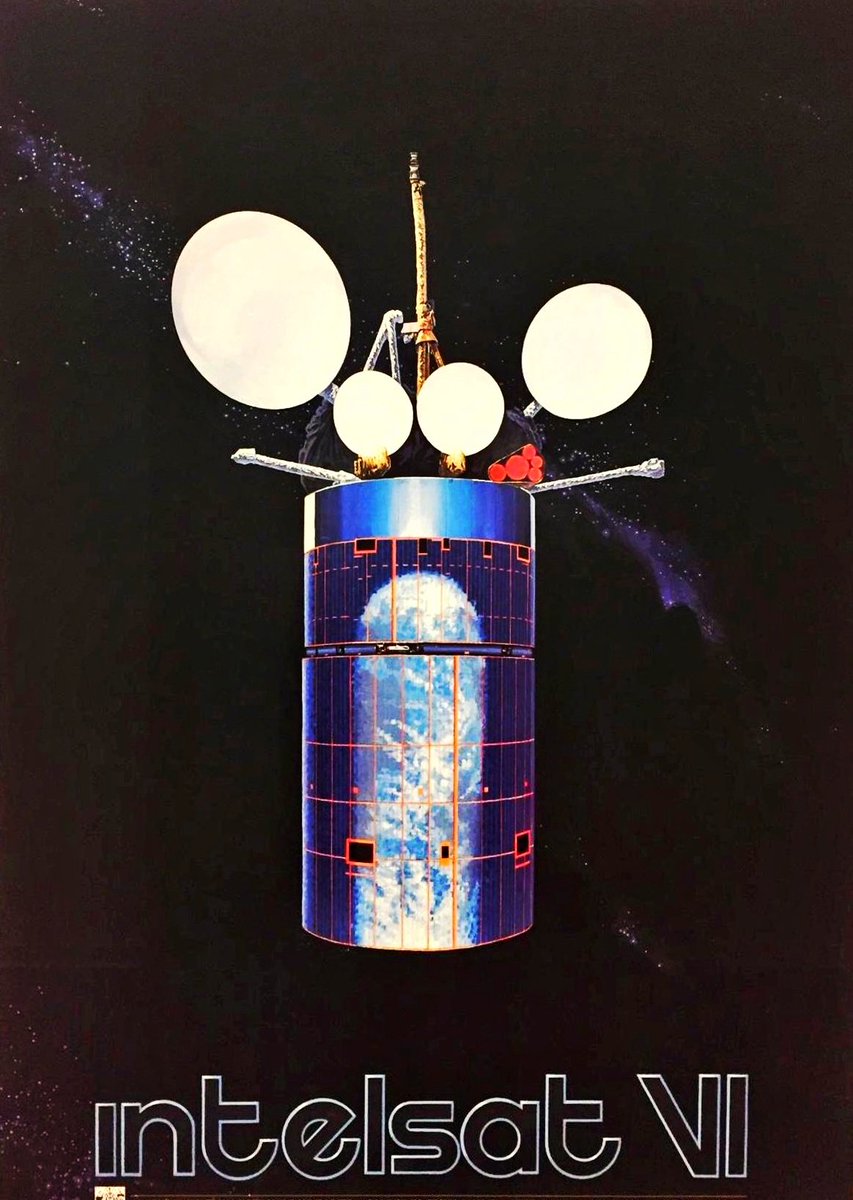 The early weather satellites were also spin stabilized, and they used the spin to scan the Earth's disc. They worked, but improved performance called for instruments that work more like cameras, and clearly a spinning platform would not work for them. Hence all newer weather satellites use very sophisticated three axis systems to provide an exceptionally steady platform.

Not the answer you're looking for? Browse other questions tagged artificial-satellite geostationary spaceflight-firsts spin-stabilisation or ask your own question.

8
Differences between launch injection and transfer orbits for geostationary satellites
16
Why are obsolete geostationary satellites re-orbited above the geostationary belt?
0
Why does a spacecraft's attitude become stable when it rotates?
15
Why do satellites appear to move faster when overhead and slower closer to the horizon?
5
Why were Europe's first few satellites so stylish? Why the pronounced alternating white and black stripes?
5
Do space organisations take the positions of space junk and satellites into account when launching?
19
When did photographic film stop being used in satellites?
1
Why are minimum three artificial satellites required for radio-communication all around the Earth?
3
Spin-stabilization of a NASA rover en route to Mars. What and why?