Could Von Neumann probes be forbidden by technological limitations?

The famous Fermi paradox asks an important question: if space-faring civilizations exist and are not extremely rare, why are they not already here? Von Neumann proposed a probe, that flies to nearest star system, there it utilizes local resources and creates copies of itself, which are sent in multiple copies to nearest stars. Even if the traveling speed of such probes would be quite small (~100 km/s), they should be able to colonize the whole galaxy in few hundreds of millions of years, time relatively short with respect of its history.

Self-replication seems to be quite a universal concept and if there is more than hundreds of civilizations in the galaxy, at least one should try it. We would very probably be able to recognize it, if it was the case. Since we do not live in the earliest part of the habitable galactic zone there probably was enough time for other civilizations to evolve. 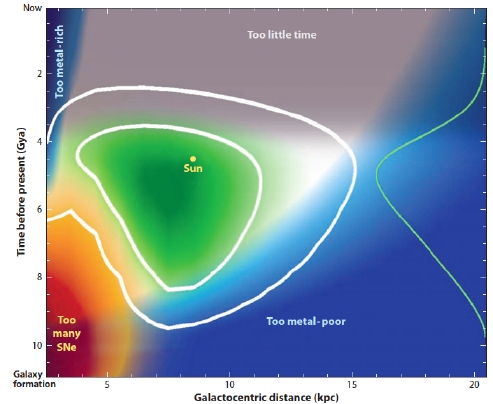 The GHZ [Galactic Habitable Zone] in the disk of the Milky Way based on the star formation rate, metallicity (blue),
sufficient time for evolution (gray), and freedom from life-extinguishing supernova explosions (red). The white contours
encompass 68% (inner) and 95% (outer) of the origins of stars with the highest potential to be harboring complex life today.
The green line on the right is the age distribution of complex life and is obtained by integrating $P_{GHZ} (r, t)$ over $r$
[relative number of potentially suitable planetary systems as a function of space and time].
Image credit: The Galactic Habitable Zone and the Age Distribution of Complex Life in the Milky Way, Lineweaver et al. (PDF).

This is exactly my question: Is it possible, that construction of the Von Neumann probe is simply not technologically viable?

Some challenges to overcome:

I realize this is a bit speculative questions. The reason why I ask it here is that I would like a serious answer that accounts for real properties of technology and limits set by the physics, rather than general "anything not strictly forbidden by the laws of physics is possible", which I would probably receive in many other places.

Edit: A great reference to the Fermi paradox here.

There's no reason a Von Neumann probe could not be built once a civilization reaches the appropriate technology level, it's a matter of desire. When a civilization becomes advanced enough all it needs to build anything is a supply of matter or energy, as the one can be used to make the other.

When you say "the absence of Von Neumann probes" I suspect that you are making the fundamental error of anthropomorphization, assuming other life would have the same motivations as humans. Other life may not want to colonize the universe, or have a desire to explore, so they may have the technology but not the desire. Or, if they discover another species they may not want contact, - species which have the technology to explore may not want to be discovered, and any intelligence able to build a Von Neumann probe wouldn't have any problems hiding it from us. So just because we don't see a hundred probes out there right now doesn't mean they do not exist, or cannot be made.

After all, nobody knows how life started on Earth? Maybe we are here because billions of years ago an ancient Von Neumann probe seeded our planet with the makings of life? Not a new idea.

Anyway, a Von Neumann probe only makes sense if a civilization is limited to sub light speeds and has short life spans, and I wouldn't make either assumption.

Having written a short article on this is my first year of uni, I concluded that the main problems with the probes would be reliability. Not only in terms of mechanical functionality but also in terms of programming. If you were to imagine that when each probe replicates there would be some degree of transmission error or corruption. This would normally be negligible, but if we scale this up to galactic or inter-galactic scales, even a minute error can grow and disrupt future generations of probes.

For more information I'd suggest you start with: Galactic exploration by directed Self-Replicating Probes, and its implications for the Fermi paradox - Martin Barlow

One interesting approach to this problem is to think about requirements for Von Neumann probes and if we’ve seen these features in nature.

Based on these requirements and what we know about the world - it seems possible.

Not the answer you're looking for? Browse other questions tagged spacecraft technology interstellar-travel fermi-paradox self-replication or ask your own question.

24
How was magnetic tape decay prevented in Voyager 1?
4
What are the problems with using the sun for Oberth maneuvers?

9
Could a swarm of probes autonomously establish orbit around an asteroid?
12
Is a combination of 'space is big' and 'humans haven't been around long' a good solution to the Fermi paradox?
2
Is there good estimates/measures on the variables that make up the Fermi paradox?
0
Copernican principle based question about ET
4
Semi-feasible alternates to silicon electronics for a Von Neumann Probe?
0
Why is the Fermi paradox' assumptions so strong? Do they even need to be?