Is the inter-manifold transfer of JWST between Sun-Earth L2 and Earth-Moon L1 within the capability of existing propulsion systems?

Context: JWST is considered un-repairable in its current L2 location for a number of reasons:

Proposal: Built a robotic â€śtugboatâ€ť with thrusters which are positioned to be safe for the optics. Have the tugboat dock with JWST using the launch mount or docking ring. The tugboat would then transfer JWST to an Earth/Moon L1 orbit. The Gateway/Artemis resources would be available for diagnosis and repair. This would avoid the expense and radiation exposure of a dedicated crewed repair mission to L2. Once repaired, the â€śtugboatâ€ť could reposition JWST at Sun/Earth L2, and remain with JWST in case a repeat mission is needed. The tugboat could also be used for end-of-life decommissioning, extending JWST service life.

This proposal depends on the availability of a low-energy transfer orbit between Sun/Earth L2 and Earth/Moon L1. One unsubstantiated internet source claimed this heteroclinic transfer could be achieved by â€śnear zero delta-Vâ€ť. https://engineering.purdue.edu/people/kathleen.howell.1/Publications/Journals/2006_AA_HowKak.pdf discusses system-to-system transfers between Sun-Earth manifolds and Earth-Moon manifolds. 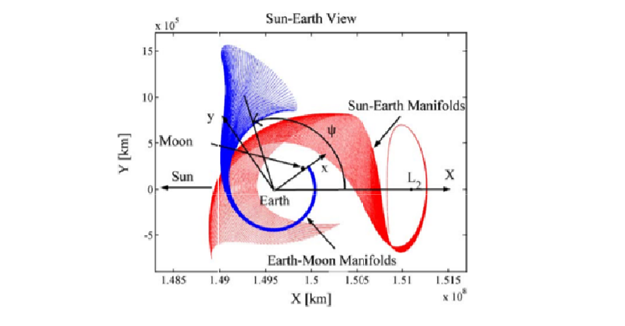 Question: Is the inter-manifold transfer of JWST from Sun-Earth L2 to Earth-Moon L1 within the capability of existing propulsion systems?

An analysis of transfers between the Earth-Moon region â€¦ EML2 Halo and â€¦ SEL2, was completed. These particular orbits are candidates for possible servicing locations for future science missions at SEL2â€¦
The calculated Î”Vs from this studyâ€¦ are still within the realm of a minimal Î”V cost. The transfer trajectory correction Î”Vs, â€¦ are near single m/s level ... the maneuvers and total Î”V cost are within the typical Î”V budget for missions to the Sun-Earth libration orbits. The Î”Vs found in this study are assumed to be feasible designs.

Not the answer you're looking for? Browse other questions tagged orbital-mechanics james-webb-telescope or ask your own question.

6
Question: Does JWST have hardware that could be used as a docking fixture by repair spacecraft?
2
With independent control of attitude and thrust direction, could JWST be kept pointing in a â€śsafeâ€ť direction during "towing"?

12
Low Energy Transfer within Earth-Moon system
15
Can the James Webb Space Telescope basically manage its own orbit if necessary?
13
Why Orion can't be used to service JWST?
22
Is it possible to refuel the James Webb Space Telescope?
41
If we can get people to the moon and back, why are we so adamant that it's impossible to service James Webb at 4x that with a one way robotic vehicle?
6
What will happen to JWST after its 10 year mission?
6
Question: Does JWST have hardware that could be used as a docking fixture by repair spacecraft?
2
With independent control of attitude and thrust direction, could JWST be kept pointing in a â€śsafeâ€ť direction during "towing"?