What are the black stripes on Kepler's image sensor?

Kepler Focal Plane Array with each tile partly covered by something looking like a bar chart.

If real, what is it?

EDIT: I do not mean the seam between the two CCDs of each tile but the slighly curved stripes partly "covering" (if real) one CCD of each 2-CCD tile. The pattern occurs on the CCD that is closer to the camera and (EDIT 2) the stripes are oriented ~parallel to the seam between the two CCDs. Clearly not a reflection of roof structure as proposed by blobbymcblobby, Uwe, and uhoh. 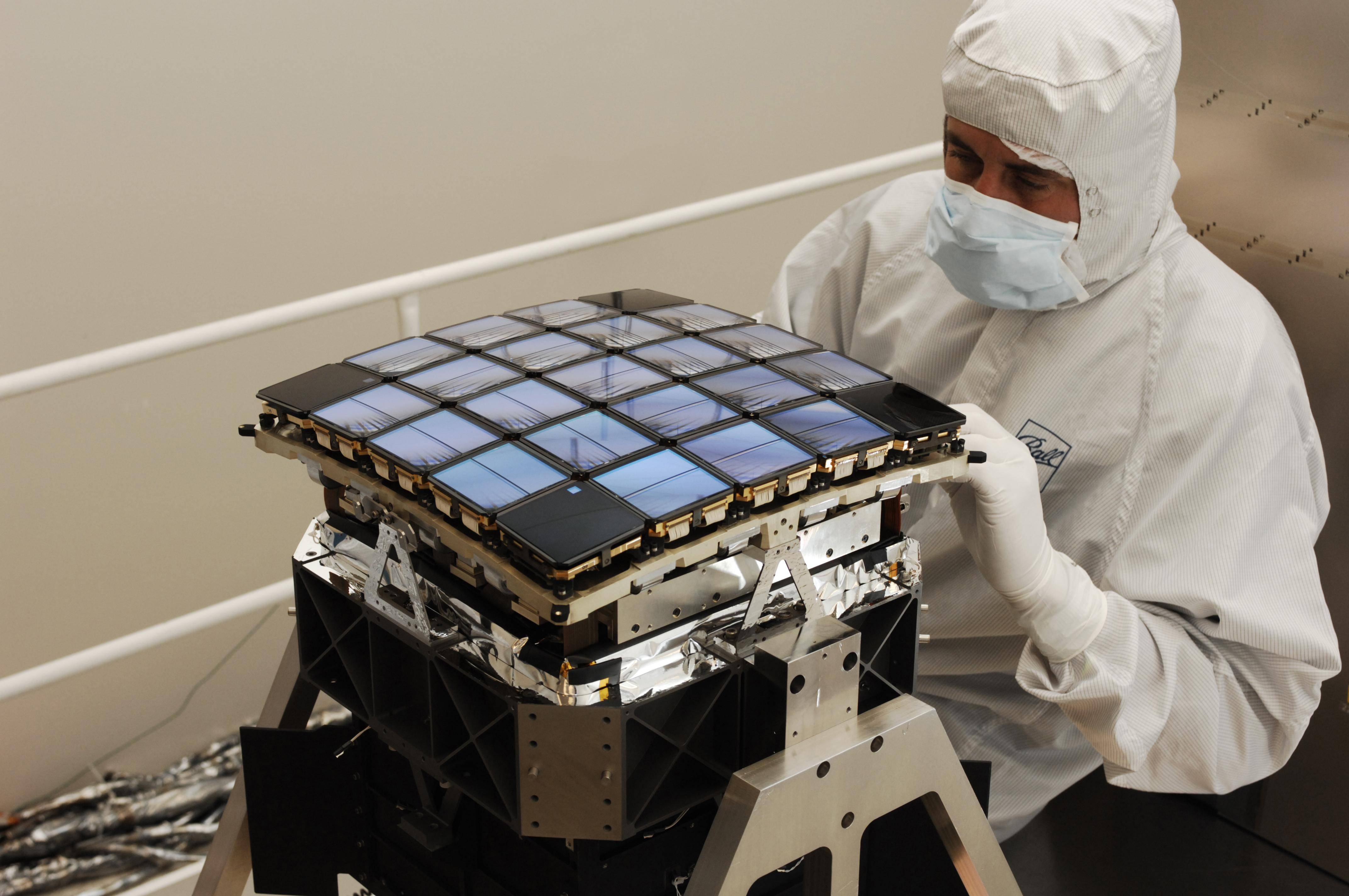 I think the bars are reflections from the clean room ceiling with many lamps and air condition outlets. 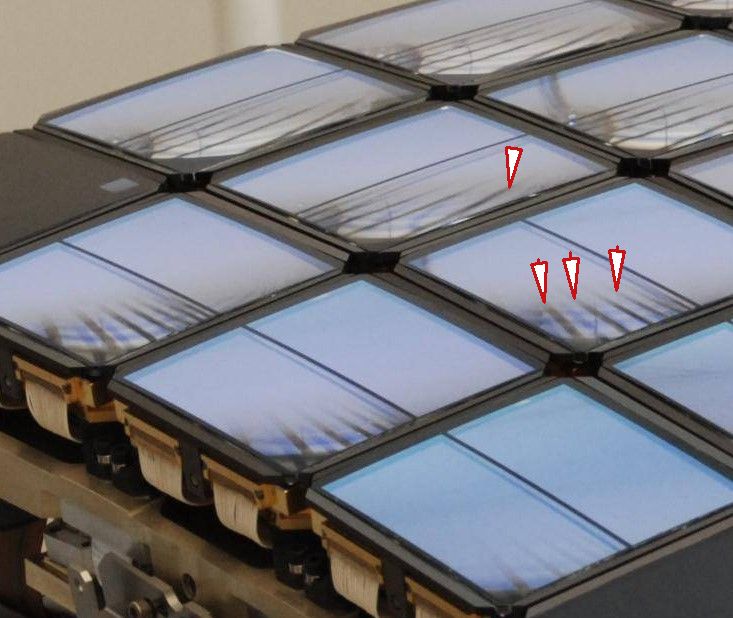 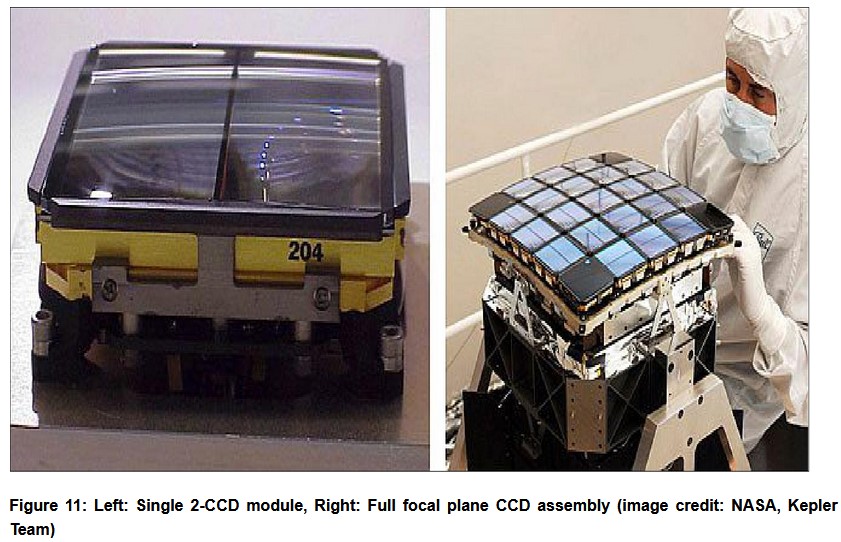 The reflections look different on each image.

The sensor array is not a flat plane to correct the curvature of the image surface.

We would need an image of the clean room ceiling for comparison, but the photographer concentrated on the sensor array.

So consider the image below:

The CCD chips have AR on them which, going by the graph, work up to a point, that being the angle of incidence at which the AR no longer works.

The green lines in the image roughly show the cut off point.

I found that the photograph was taken at the Ball Aerospace facility and all 3 (4) photographs seem to match that facility with both staff and ceiling details.

The smaller colored lines indicate multiple refractions or reflections of the ceiling grid.

The orange lines indicate the angle of the secondary reflections inside the facility.

The red lines shows the angles where the chips do not have AR and do not have the sapphire lens on top, so no curvature and no ceiling reflection at their angle, but do reflect the facility as the secondary reflection in the CCD's.

The curvature of both the grid reflected at least twice and of the secondary reflection in each block is due to the curvature of the sapphire lens that covers each CCD pair as shown in the diagram.

Reason for only one side of each pair showing the features is that each pair are placed opposing eachother.

Hope thats on the right track.. 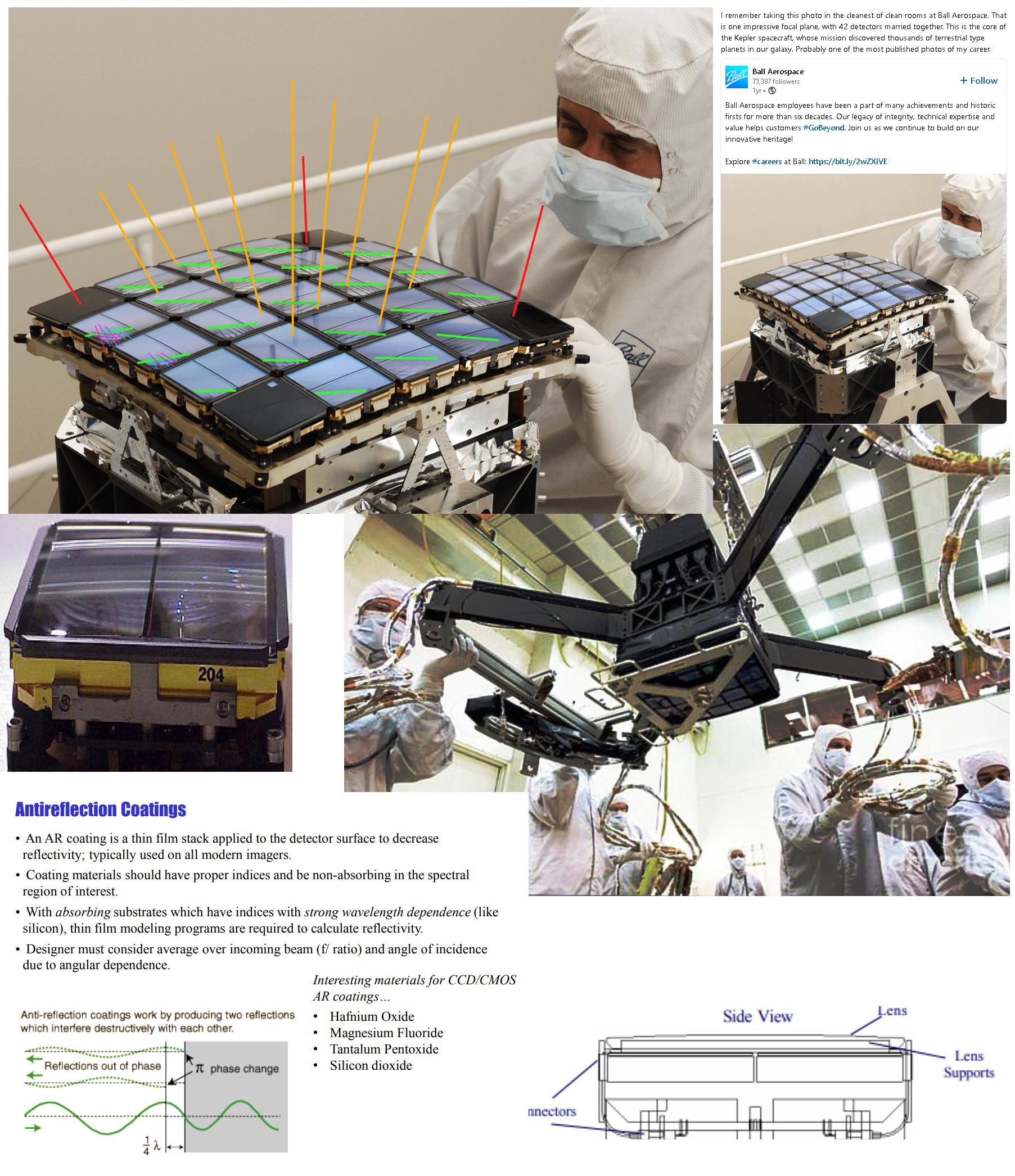 Not the answer you're looking for? Browse other questions tagged identify-this-object sensors kepler-telescope or ask your own question.

7
What kind of science can be conducted with the crippled Kepler telescope?
13
How does a gamma ray altimeter work? What kind of sensor is used?
1
At what time in the Apollo 14 mission did the maneuver shown in this image happen, and what exactly was happening?
0
What spacecraft components are in the foreground of this image of the Earth and Moon? What is the camera inside of?
10
What are these stacked panels on the ISS in this image?
0
What is this long black tube snaking up to the capsule payload of the Antares rocket?
5
Help understanding this Apollo 11 docking probe image, what are we looking at, and from where?
1
What cubesats are these, what flags are on them, and why? What's the background story?