Which (if any) Vanguard satellite spun at 150 RPM? How fast did the rest spin, or at leased would have spun had they succeeded?

From Wikipedia's Project Vanguard; Launch_history I found some candidates for satellites that had pages which I could search for the term "RPM". This is not an exhaustive search, it's just meant get things started:

And yet a documentary film circa 1960 mentions 150 RPM with respect to Vanguard satellites. From 1957-1959 IBM 704 Computer - Vanguard Satellite Program "Science in Space" (Burroughs Datatron) NASA (alternate version of the video here)

At this point it is traveling parallel to the Earth's surface. However the vehicle is traveling only nine thousand miles an hour, not yet fast enough to overcome the pull of gravity and stay in orbit.

Question: Which (if any) Vanguard satellite spun at 150 RPM? How fast did the rest spin, or at leased would have spun had they succeeded?

Also, earlier in the film:

Laboratory tests helped to insure that the payload will withstand not only the intense vibration of launching and flight, but also in some cases the strain caused by hundreds of revolutions a minute. 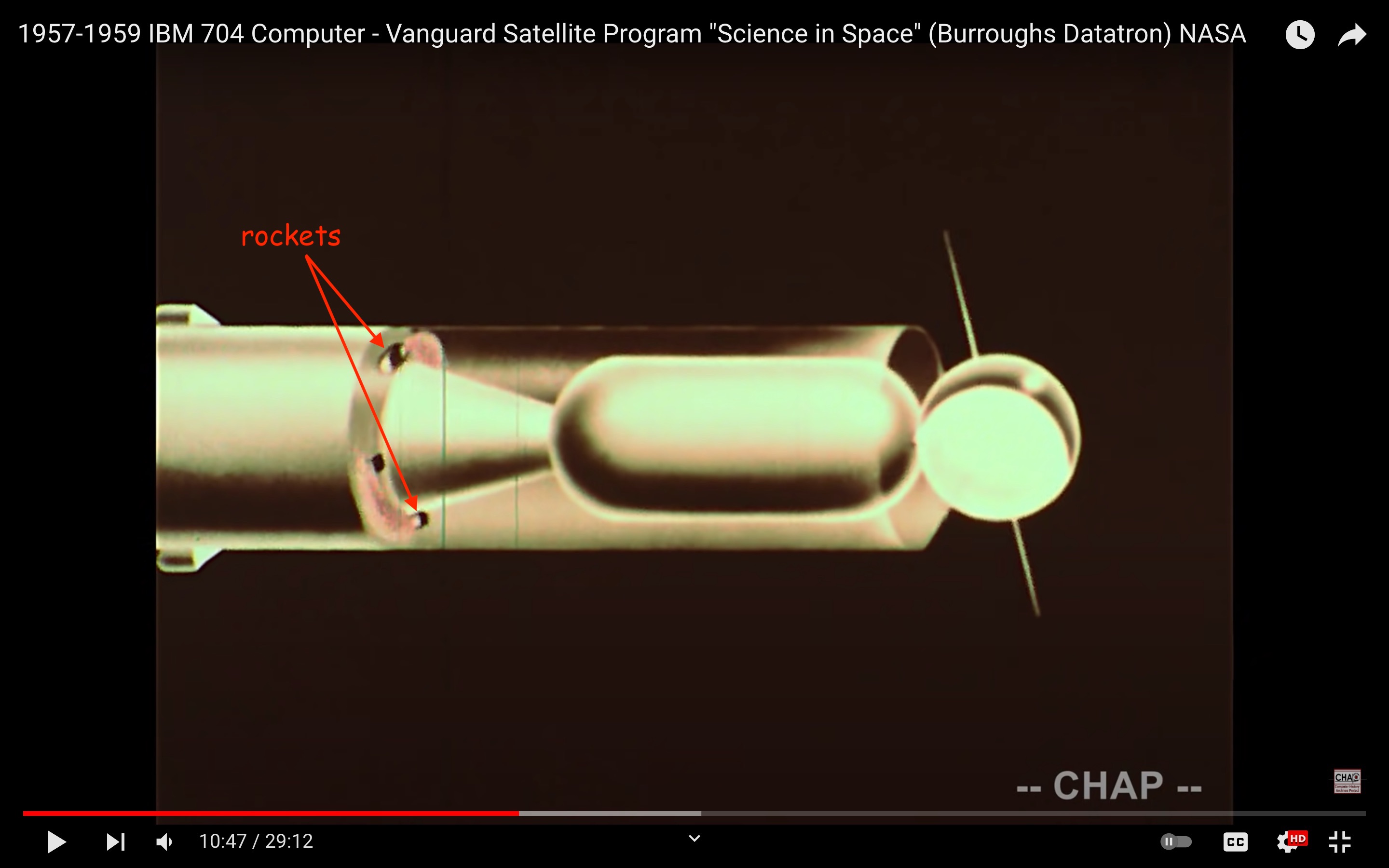 above: Screenshot (annotated) showing rockets used to spin up a Vanguard satellite before the third stage ignites and separates from the second stage, from "1957-1959 IBM 704 Computer - Vanguard Satellite Program "Science in Space" (Burroughs Datatron) NASA" below: Screenshot showing a Vanguard-like satellite being spin-tested from the same video: 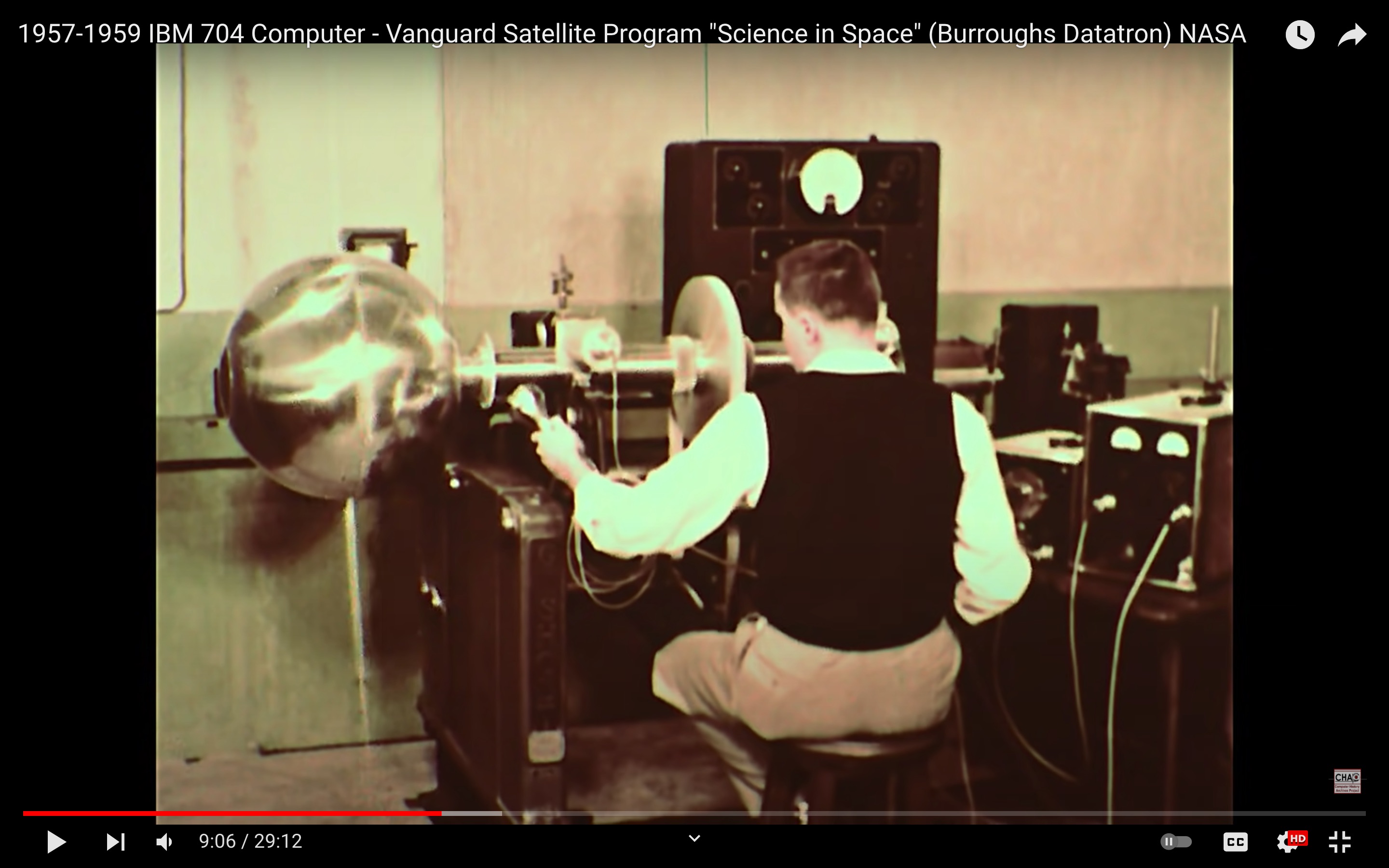 Question: Which (if any) Vanguard satellite spun at 150 RPM?

How fast did the rest spin, or at least would have spun had they succeeded?

The design of the third stage was that it was supposed to spin up to about 178rpm, with the release of the satellite timed to happen when the appropriate spin rate is reached.

Vanguard 1 was about 25rpm but experienced up to about 30rpm increase due to 3rd stage burning unexpended fuel.

Vanguard 2 achieved about 98rpm but was bumped by the third stage resulting in -1rpm spin and 15rpm about its equator, resulting in a tumble.

Vanguard 3 used an entirely different third stage that worked as predicted. Spin was designed for 150rpm.

They left the third stage attached to the payload since with fuel expended and it being of lightweight construction was not expected to cause an issue.

4
What is the highest RPM achieved through a spin-stabilized rocket/spacecraft?

6
How did the upper stage of the Juno 1 rocket change its orientation while it was spinning?
6
How did the Corona (Key Hole) satellites film canisters deorbit?
8
How were video tape recorders adapted to work in orbit in 1962?
4
When and what was the first successful photograph of an orbital spacecraft from Earth taken?
3
How long was Sputnik 1's second stage rocket body in orbit? Are there TLEs for it?
3
Spin-stabilization of a NASA rover en route to Mars. What and why?
2
What was the first successful two-stage-to-orbit launch by the US? What was the first attempt if different?