What would the James Webb telescope see if it looked at itself from Earth?

This question asks whether any ground-based telescopes can see the James Webb. The answer ("yes, but it's basically just an indistinct dot") is deeply underwhelming. If only we had a much better telescope that we could use to look at it...

What would the James Webb see if it imaged itself from Earth Orbit?

The answer is going to be deeply underwhelming regardless of what telescope you use, because of the sunshield, and because of its location.

It lives at the Earth-Sun L2 point, as shown on this handy diagram from wikipedia: 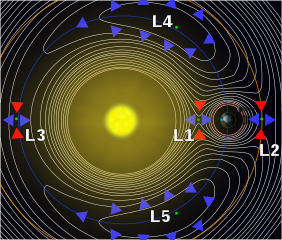 this means we will always be on the sunward-side of the device, which means all we will ever be able to see is the sun-side of the sun-shield. Wikipedia has this image: 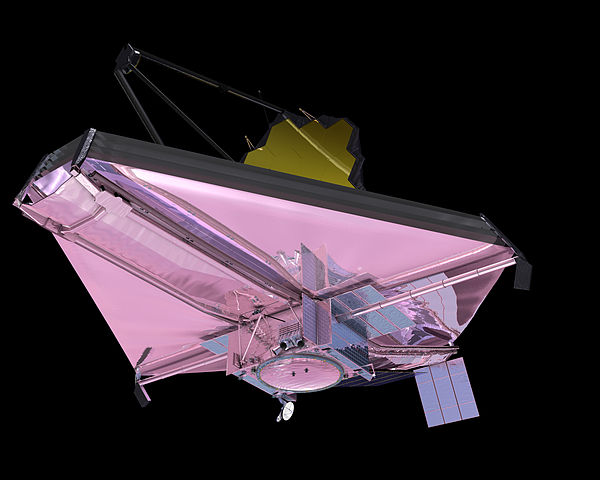 That's a visible-light rendering, of course, and I'm not entirely sure what it would look like in the IR spectra that the JWST sees in. NIRCam can see 600nm light (orangey). I can't see what angular resolution it has for visible-light imaging, but for near IR at 2000nm it is 0.07 seconds of arc. The face of the sunshield will be at a nice warm 383K so it'll be visible to at least one of the JWST's sensors, I'm sure.

The L2 point is ~1.5 million km away from Earth, and at that distance 0.07 arc seconds is equivalent to a feature size of a little over 500m. Given that the JWST is 20m long in its largest dimension, you're not actually going to get a blurry image... you're going to get a single pixel. Technically, it might be quite sharp. Just not very interesting.

Not the answer you're looking for? Browse other questions tagged james-webb-telescope visibility-of-spacecraft or ask your own question.

10
Can any other telescopes see the James Webb Space Telescope?
6
How "specularly" and therefore spectacularly will JWST reflect sunlight? Will we be watching for JWST flares?

15
Can the James Webb Space Telescope basically manage its own orbit if necessary?
42
Why are so many space telescopes placed in LEO instead of at Lagrange Points? And why do we hear about Hubble more than any Langrange-orbit telescope?
4
Would it have been cheaper and/or faster to put a James Webb-like Space Telescope on a balloon instead of a rocket?
10
The design of the halo orbit of the James Webb Space Telescope
5
Help me understand these tweeted images of JWST moving through Orion!
37
Can James Webb take pictures of our solar system? In what ways will they differ from/compliment those from Hubble?
18
Is there something inherently more difficult about servicing satellites in the 2nd Sun-Earth Lagrangian point?