In the Apollo 11 LEM source code, in the Burn Baby Burn master ignition routine, one of the most emphasized comment is a French citation, HONI SOIT QUI MAL Y PENSE.

According to wikipedia, this locution is

is a maxim in the Anglo-Norman language, a dialect of Old Norman French spoken by the medieval ruling class in England, meaning "shamed be whoever thinks ill of it" […]

Note that the same Wikipedia article acknowledge the presence of that locution in the Apollo source code, but only provides sources, not explanations.

(also, the same locution with two n to Honni, also valid in French, is the French title of an American movie)

Why was such a locution placed there? Is their any evidence of why that comment was written and placed there? 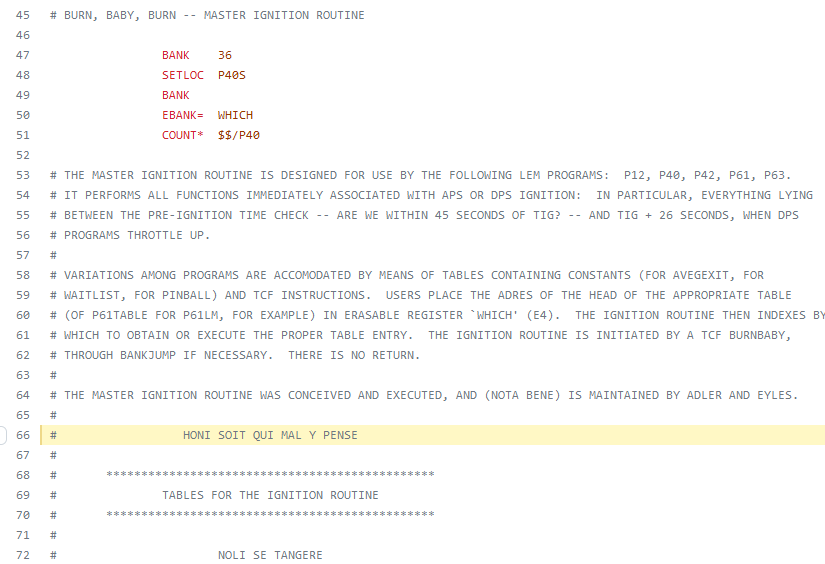 And another story behind the software: https://www.heidi.news/sciences-climat/the-programmer-behind-the-moon-mission-revelations-of-the-apollo-11-software

«Honi soit qui mal y pense.» These are the words that precede the ignition routine of the Apollo 11 mission. And they reflect the struggle for recognition that Hamilton's team was experiencing at the beginning of the project. While the role of engineers was clear, there is not even a budget for the software department initially.