I found a brochure by Raytheon about the Apollo Guidance Computer. 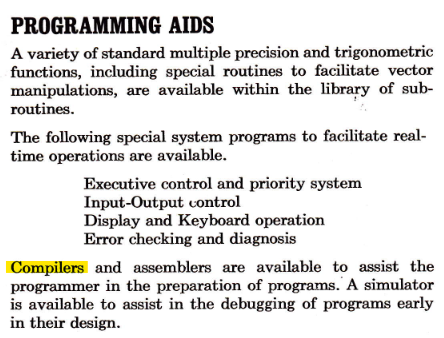 A compiler was announced for the AGC.

As far as I know the AGC was programmed in assembler only. What kind of high level language was used with this compiler? Was it used anytime for any later project? Was this compiler ever delivered to a costumer and used for a project?

I can only speak regarding the high level programming which was at that time exclusively done using FORTRAN (Formula Translating System). I did work on Apollo and all scientific calculations that I ever saw were written in FORTRAN. Fortran is still used today in heavy numerical work; Python, for example, is relatively slow.

From this answer from @Mike Dunlavey:

The guidance computers for the command module and lunar landing module were each programmed in their own assembly language. The missions were exhaustively simulated on a large IBM 360 Model 75 computer, using a language called MAC-360 created by Hal Laning. It resembled Fortran in being mostly about mathematical calculations. It had a 3-line format for representing vector and matrix calculations.

From this answer from Mark Shulmann to the question "Why wasn't the Apollo 11 code written in higher programming languages like Fortran or COBOL?" asked on Quora:

The major reason was that compilers at the time did not generate code that was anywhere close to being as memory-efficient as what a programmer could produce in assembler (machine code).

The keypoint is that even with 36K, the programmers and hardware designers had to pull some crazy tricks to get the software to fit into the available memory. If they had used a high-level language, they likely would have needed far more memory to hold the software.

Finally, as Tony Flury points out in his answer, the AGC was a custom-designed architecture. There were no FORTRAN, COBOL, or ALGOL compilers available for it. If the software designers had wanted to use a high-level language, they would have had to write their own compiler for the AGC.

Conclusion: mission simulations were exhaustively done using high-level language(s), but the program that ran on the AGC itself was written in assembly language and thus no compiler for this computer alone was needed.

I found some information at MIT :

More about MAC in this MIT paper:

In 1953 the first version of 'George', the first algebraic compiler was finished.

'George' led to the devlopment of IBM FORTRAN by John Backus. 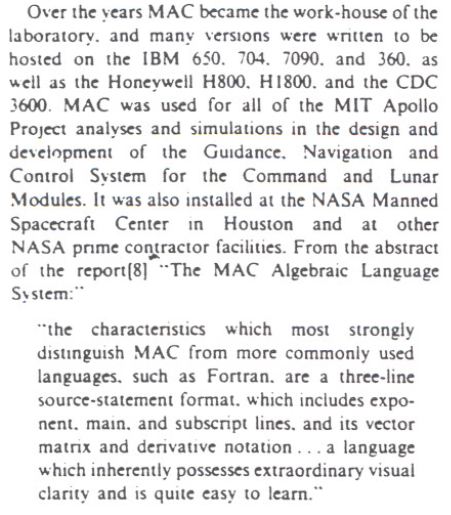 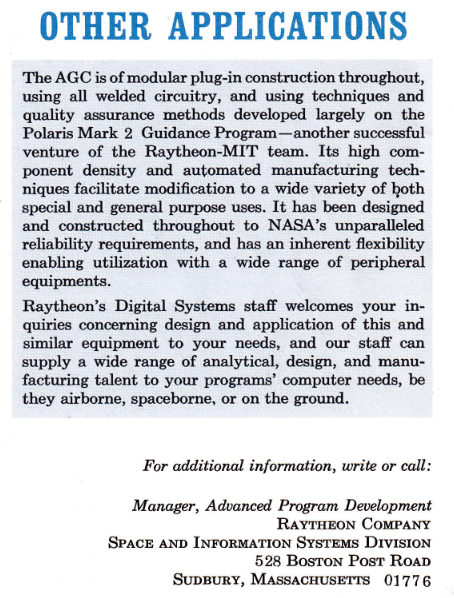 So the compiler for AGC mentioned in the Raytheon brochure was designed for the MAC (MIT Algebraic Compiler) language. It was not used for Apollo, but it was offered for other applications of the AGC.

Not the answer you're looking for? Browse other questions tagged apollo-program computer agc or ask your own question.

23
Fortran and the Apollo 11 mission

20
Could an Apollo LM land uncrewed?
5
Was the Apollo sextant used (or tested) to determine position while in Earth orbit?
13
What colors were used in the Apollo Lunar Module interior, and why?
3
What was NASA's “LUROVA” Operational Thermal Computer Model analog or digital? How were capacitors used?
9
Bits per core for the different versions of the Apollo guidance computer core rope memory?
9
Did the RTCC ever “fail over” to the standby computer during a mission?
19
Lunar Terrain Model in Apollo Guidance Computer
15
What does the ATOLL programming language look like?