Are we capable (engineering-wise) of building a spacecraft in space?

Rockets are expensive. And for the most part, one-time-use-only.

SSTO promises to change that.

However, SSTOs will have limited payload capacity (as will every launch vehicle), and eventually missions we will require more Delta-V and more payload mass than a single trip can handle.

If we're going to put people on Mars, it's going to require a lot of equipment, and a lot of Delta-V to get it there.

Absolutely. Perhaps not "built" in the sense you're talking about, but certainly assembled. A sterling example is the International Space Station. There are about a dozen distinct modules in the ISS that are pressurized and fit for occupation. The first was Zarya, and the latest is Leonardo. They've been constructed by many different countries, and have been added on individually. There are also many unpressurized components. Here's a handy-dandy map - a guide to the ISS (from Wikipedia) 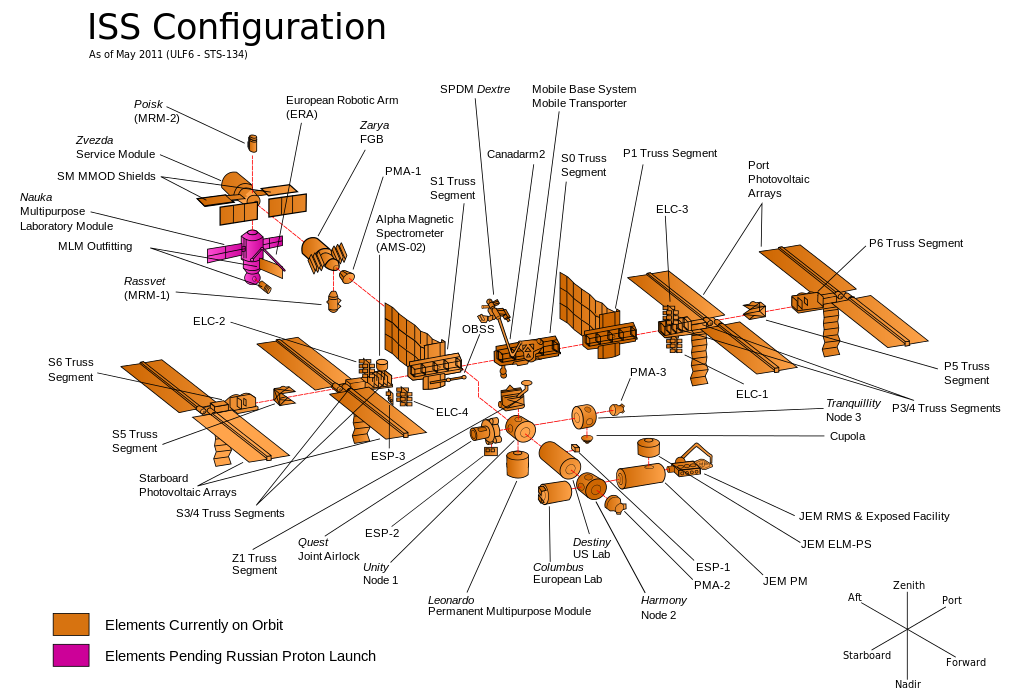 Some details regarding the assembly process can be found here, but I feel that this section better explains things. Many components were brought up on launches of the Russian Proton rockets, as well as numerous Space Shuttle launches. Each new module connected smoothly with the others. They were pre-built, but were put together in orbit.

The other thing a project like this is going to take is money. And a lot of it. The ISS may have cost 150 billion dollars. That's a staggering amount of money. That does appear to take into account the cost of Space Shuttle flights. Now, this site says that a mission to Mars would be cheaper:

To put that number in perspective, just over 10 years ago NASA estimated the cost to send astronauts to Mars. Their rough estimates put the price of a human Mars mission in the ballpark of $40 billion US dollars.

A mission to Mars would require a decently-sized rocket. The ISS is about 357 feet long. That's roughly the size of a Saturn V rocket. Now, if you built the rocket in orbit, it might not need to be so large, because it would already be in orbit.

Another huge disadvantage to 'building' something vs. assembling something, is working in a spacesuit. Tool use and everything else is much, much, much harder than in a shirtsleeve environment (just the amount of effort you need to do to close your hands while working through 5 pairs of gloves that're pressurized, while hauling around the weight of micro-heaters on each finger). Just suiting up and unsuiting eats a fair amount into each work day. Once you start working longer hours to try and make up for that, you start making errors.

Diagram of spacesuit glove with layers:

Using spacesuit gloves can cause your fingernails to fall off

Working on the Hubble

Which talks about the problems of merely unscrewing(!!) a connector (makes micro metal debris which can short out / impair your electronics). On Earth; gravity, wind and vacuum can all be used to get rid of that debris and make it into dust which just 'magically' goes 'away'.

Depends on your definition of built (see HDE's answer for a detailed explaination of the ISS' assembly), but for the purposes of this answer I will presume you mean where a team in space would receive an IKEA-esque flat pack of parts and then assembles it into a working vessel in space.

Can it be done?

Yes, in fact the ISS shows us a working example of a similar process, the crew frequently receive repair kits or scientific modules that have to be attached to the outside of the station on EVA. This involves alot the regular engineering works my might expect a construction team to do:

Has it been done?

Not to my knowledge. This might seem strange, but the reasoning is actually quite simple if we examine the potential advantages and disadvantages.

Until we have a way of gathering fuel or the raw materials in space there isn't much to gain from building in space.

Not the answer you're looking for? Browse other questions tagged rockets cost ssto cost-to-orbit or ask your own question.

8
What is the practical limit on reusable chemical rockets?
5
Could a SSTO bladder of air scooped from atmosphere improve performance?
6
Why aren't space probes launched in batches?
7
Which is overall more expensive to operate for a final rocket stage? LH2/LOX or hypergolics like UDMH/N2O4?
14
Engineering difficulties towards near-perfect rockets?
27
What's the largest single object payload ever lifted into space?
0
How will the BE-4 engine "Save taxpayer money"?
4
Optimal size for heavy-lift launch vehicle
1
How would an SSTO adapt to various payloads?