How did pages of Ramon's diary survive the Columbia disaster?

In early 2003, the space shuttle Columbia burnt up due to a failed leading edge on the wing from an external tank foam strike. All seven astronauts were killed. Yet, some pages of Ilan Ramon's diary, which were aboard, survived readable. How is it possible that the diary was fine and readable, and yet the shuttle burnt up, and killed everyone?

The shuttle did not "burn(t) up". It broke up. In the chaotic environment following the breakup, aerodynamic heating of individual items varied greatly.

The main body breakup, referred to as the Catastrophic Event (CE) in this document, occurred after Mach 15. It was described as follows

The conclusion was that the forward and midbody orbiter segments separated at the CE. The CE is actually the start of a period of several seconds in which the orbiter underwent a major structural breakup.

The subsequent breakup of the crew module is referred to as the Crew Module Catastrophic Event (CMCE).

Analysis of thermal vectors on numerous debris items showed multiple independent heat vectors across the structure. For example, many recovered middeck floor panels were nearly pristine with paint still visible, while floor panels from immediately adjacent locations had melted materials deposited on them and other signs of high thermal exposure (figure 1.1-31). 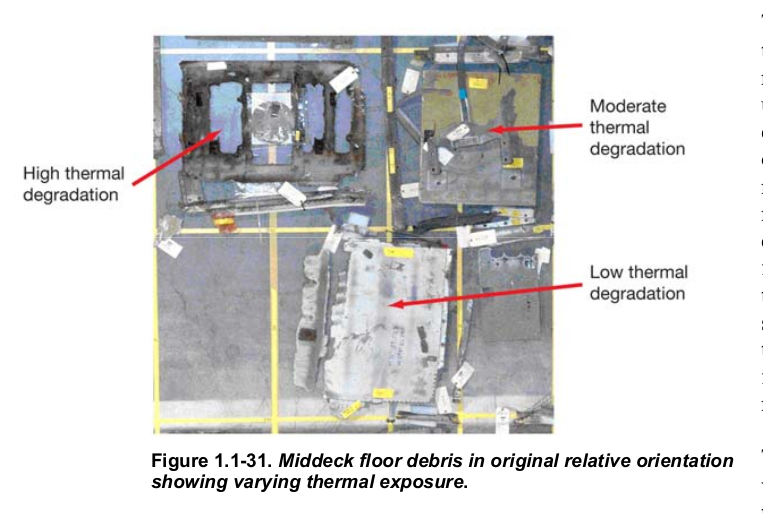 After breakup, individual items experienced their own trajectories and heat exposure. This heat exposure can vary enormously with ballistic number and other effects such as shadowing from other debris items and orientation of the item into the heat vector. The lack of consistent directional heating vectors on crew module debris suggests heating was due to individual item trajectories and random exposure during breakup rather than a major breach resulting in directional heating. 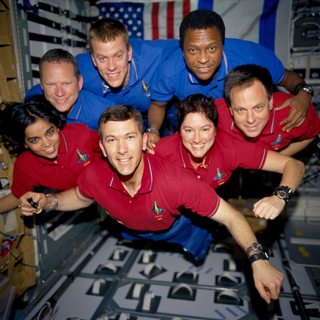 Not the answer you're looking for? Browse other questions tagged nasa crewed-spaceflight space-shuttle failure shuttle-columbia or ask your own question.

36
Do rockets, launch vehicles or spacecraft contain a black-box?
9
About how far was debris scattered from the Columbia incident?

9
About how far was debris scattered from the Columbia incident?
14
Was the possibility of damage to the SS Columbia made public before it reentered on Feb 1, 2003?
50
What would NASA have done if they knew Columbia was catastrophically damaged?
7
Why didn't the space shuttle use non-foam-shedding external tanks?
43
During the Space Shuttle Columbia Disaster of 2003, Why Did The Flight Director Say, "Lock the doors."?
6
Shuttle RCC (reinforced carbon-carbon) panels?
28
How much longer did Columbia need to survive?
15
Did any Columbia debris continue orbiting Earth?