Why all the 'dust' on liftoff?

To bring things back to earth (literally), why is there such a plume of what I can only imagine is dust on liftoff from launchpads on Earth?

Every launch I see from Earth has a huge cloud shooting out in all directions from the pad. As the rocket gains altitude, pretty quickly you can tell that the cloud stops billowing out from the rocket once it has reached half its own height. The plume seems not to be from the rocket itself exhaust alone but from an interaction of the rocket exhaust with the ground. 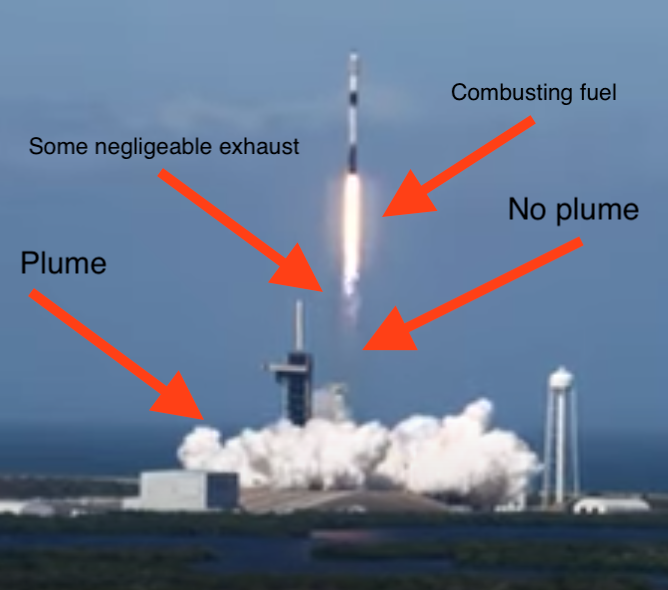 What is the cause/source/material of this plume?

My first impression is that it is simply dust on the launch pad surface, and the rocket exhaust is blowing it out into the air. Is there -that- much dust on Earth?

On thinking, this seems like way too big a cloud of dust. I'd think that that size of cloud would come from a thick layer of settled dust on the pad (like an inch deep). But from film of these pads they seem clean enough. And then if the pad is reused, you'd think the pad would have been cleaned off enough so that next time (even after a few months) it wouldn't be so bad.

On landing of the latest SpaceX Falcons on the floating ship platforms there is still some appreciable cloud blowing out from where it lands (and presumably there is little dust on the surface of a ship).

So what is the cause of the big cloud on liftoff? And for when a rocket has those trails that continue behind it, what is that then since it is unlikely to be dust?

I took some screenshots of the linked video. 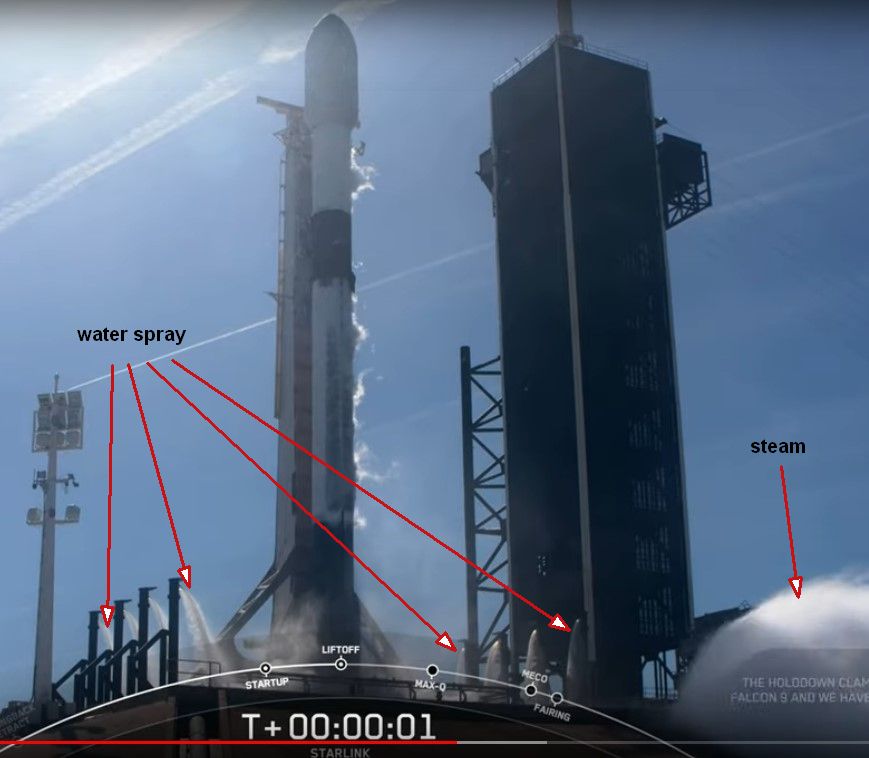 At T+4 seconds there is steam only from the flame trench.

At T+6 seconds there is steam at the left, at the center and the right side of the image.

So there is no dust to be seen, only steam clouds as a result of the contact of the cooling water and the very hot rocket exhaust. The water is also used to absorb the shock waves from the exhaust, keeping them from damaging either the rocket or the launch pad as commented by Mark.

The landing pad made of concrete is exposed to the very hot and very fast rocket exhaust. Standard concrete exposed to temperatures above 250 °C is cracking and flaking, the water of the hydrates is removed and the cement is a fine gray powder again. So the dust is mostly the Portland cement used to mix the concrete.

I always thought that 'plume' indicated in the first picture was from water:

Water stored in a 300,000-gallon elevated tank is released just prior to main engine ignition and flows to the launch platform outlets.

There are six 12-foot high nozzles, called rainbirds. At main engine ignition, a torrent of water flows onto the mobile launcher. Nine seconds after liftoff, 900,000 gallons of water per minute are spraying through the area to reduce the acoustical levels in the payload bay area to about 180 decibels (db).

A water spray system provides a cushion of water directed down into and around the primary flame hole beneath the solid rocket boosters, and a secondary water spray blocks the path of pressure waves to decrease the intensity of pressure at the launch site.

When you view a ... launch on television, the white smoke filling the air is really steam from those millions of gallons of water evaporating. The actual exhaust smoke from the solid rocket motors goes out the other end of the launch pad through the Flame Deflector System.

But it is obviously not the same when you are talking about the second picture. I thought that was the rocket exhaust contacting and interacting with the Pad and its environment.

Almost all of the highest energy density chemical fuels available are hydrocarbons (and certainly the most practical). When they burn cleanly, they generally go like so:

The CO₂ is invisible at STP (and rocket exhaust temperatures, even), but the H₂O is visible once it condenses into droplets. Some CO is also produced as well as various nitrogen compounds from the ambient air, but they are all irrelevant to this discussion.

Airliners at altitude fly through air which is typically -40°C, so the H₂O condenses immediately, leaving the famous "chemtrails". Rockets landing on a pad typically see much warmer air, but still colder than the 100°C required to maintain the gas phase.

Air is a good insulator, so when steam interacts with it at 20-30°C, it takes a while to condense, which is why the rocket plume is not necessarily billowy at semi-low altitude. But the solid ground is a reasonably good thermal conductor compared to air, and is more than happy to accept the steam's momentum, condensing it into visible water vapor near the ground.

Not the answer you're looking for? Browse other questions tagged rockets earth liftoff or ask your own question.

2
Why does air get sucked in for a moment before engine start?

7
Why not plug it into the wall?
13
Why are rocket launches so loud?
16
Cause of apparent plume deflection on SES-10?
2
Why would one assume chamber pressure instead of chamber volume when designing a rocket engine?
4
Why is specific impulse equivalent to effective exhaust velocity?
8
What is this South Korean rocket and why does it have separate yellow and blue exhaust plumes?
1
What is the point of having a central rocket engine when it receives performance losses?