During powered descent a 1202 alarm occurred when LM Pilot Buzz Aldrin asked the Apollo Guidance Computer (AGC) for the difference between computed and measured altitude above ground by typing V16N68 (this is well explained here).

I am analyzing the raw telemetries of the landing; the part showing registers status is not clear to me at 102:38:27, at first 1202 alarm: 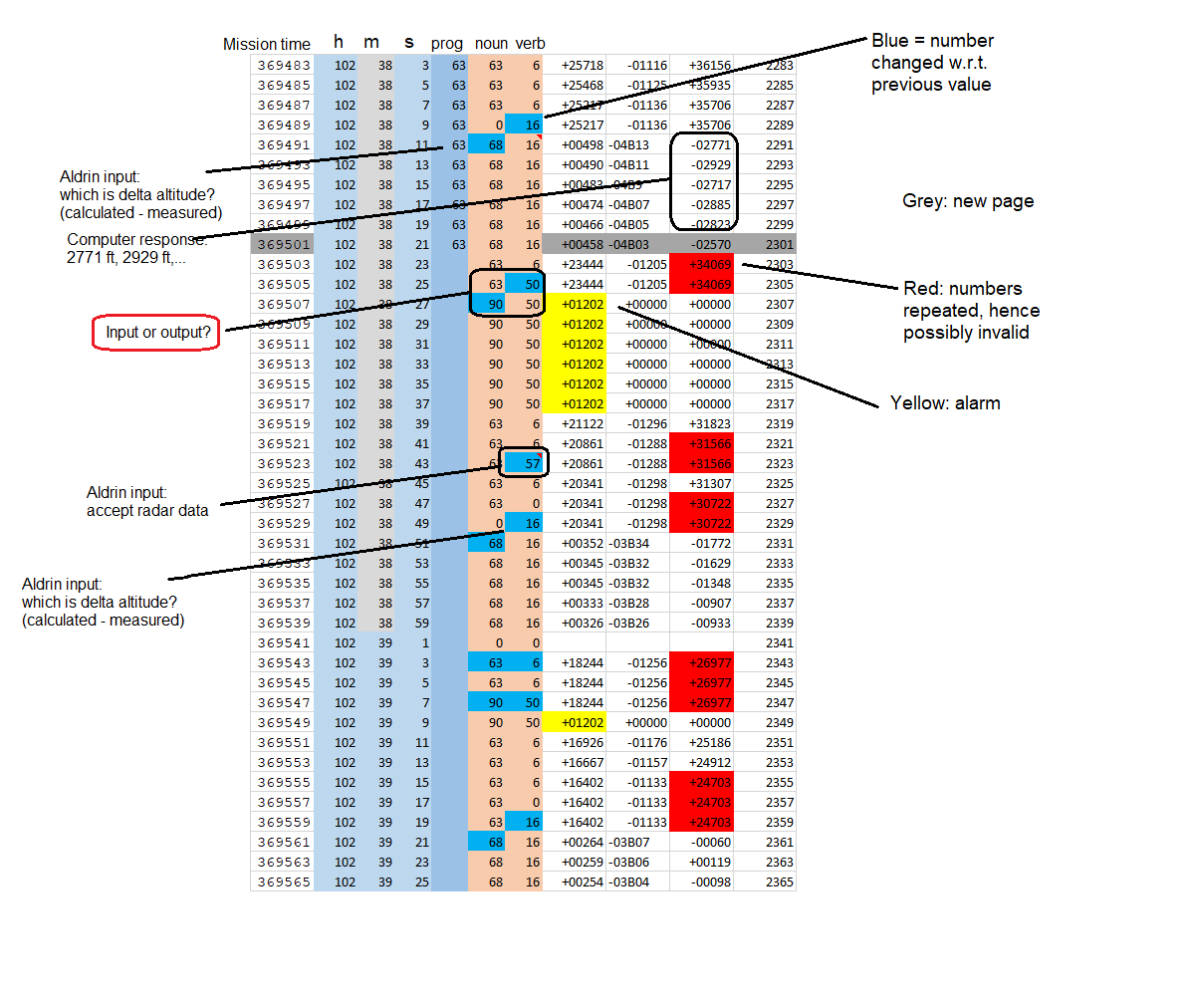 The above source states that "V90N50E" is an "Aldrin input to stop the alarm", but there are some problems here:

Possibily 50 and 90 have a different meaning w.r.t. the "cheatsheets", being them associated to the alarm, just like R2 and R3 have no meaning during the alarm, but where to find some documentation about this topic?

As a side note, here it is what astronauts were trying to see "by numbers", not being available any graphical monitor: 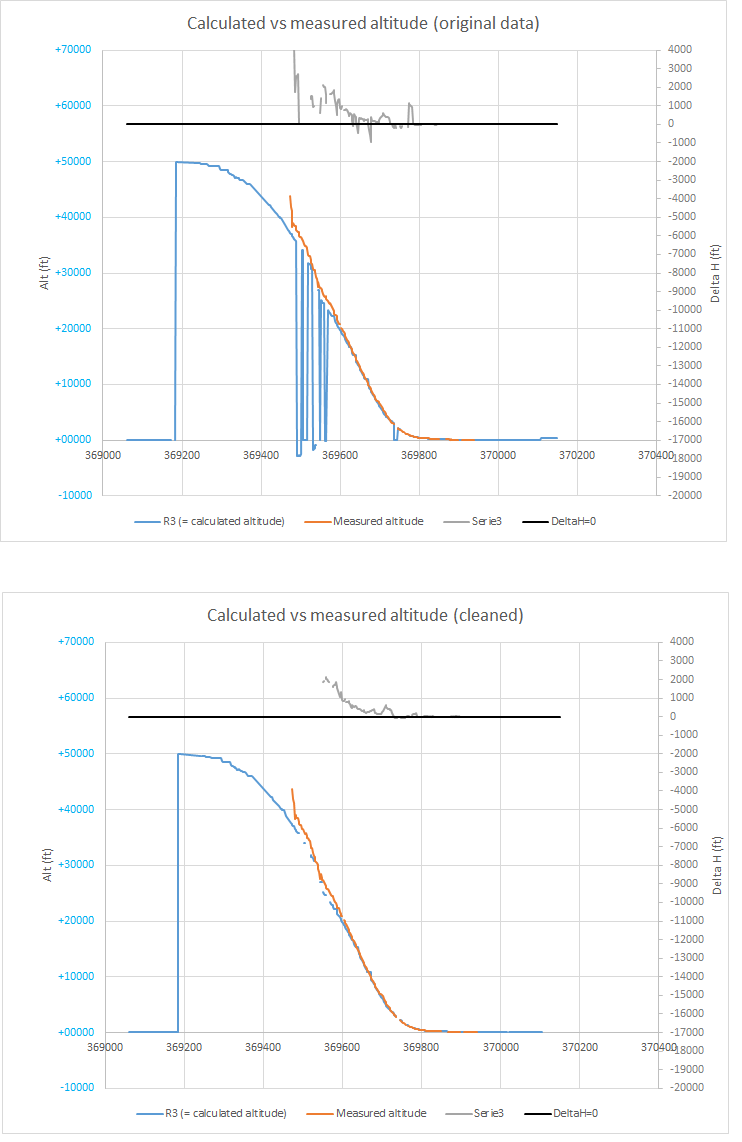 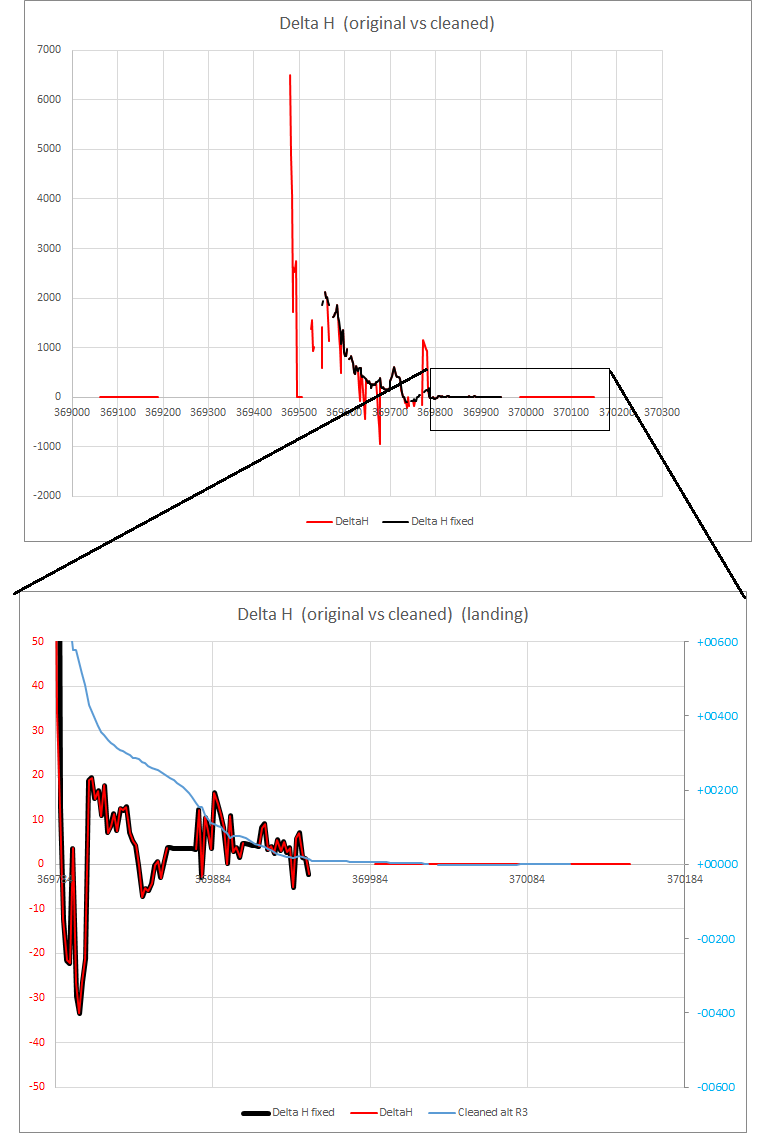 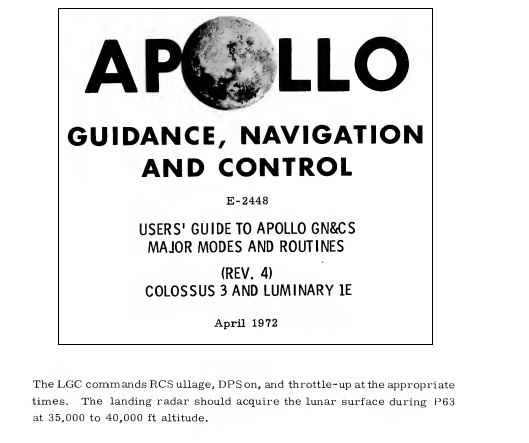 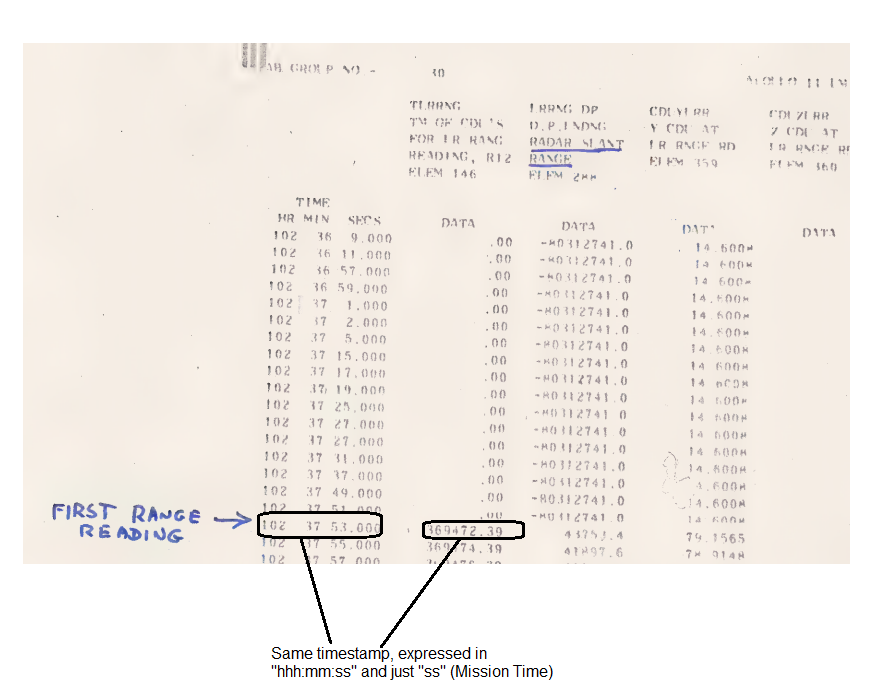 Apparently the answer is "They don't mean anything, it's a telemetry bug".

But, to save precious memory locations (each single bit required a complex wiring of core memories, and it increased weight), a very peculiar hardware/software algorithm (link for real nerds: link) was invented to represent the 18 digits of the 3 registers (5 digits plus sign), which eventually resulted in this truth table:

A "blank" digit (all segments turned off) corresponds to value 00000 sent to ground!

Typing V5N9E is perfectly legal, given that there is the "N" which separates verb from noun and prevents amibiguity. Usually the astronauts typed single-digit verbs and nouns as two digits (0 followed by digit); in this specific case, probably due to hurry caused by alarm, they just typed the "short version", which resulted in the telemetry bug.

This is better explained here: https://github.com/virtualagc/virtualagc/discussions/1166

These are excerpts from LMA790-3-LM - APOLLO OPERATIONS HANDBOOK: 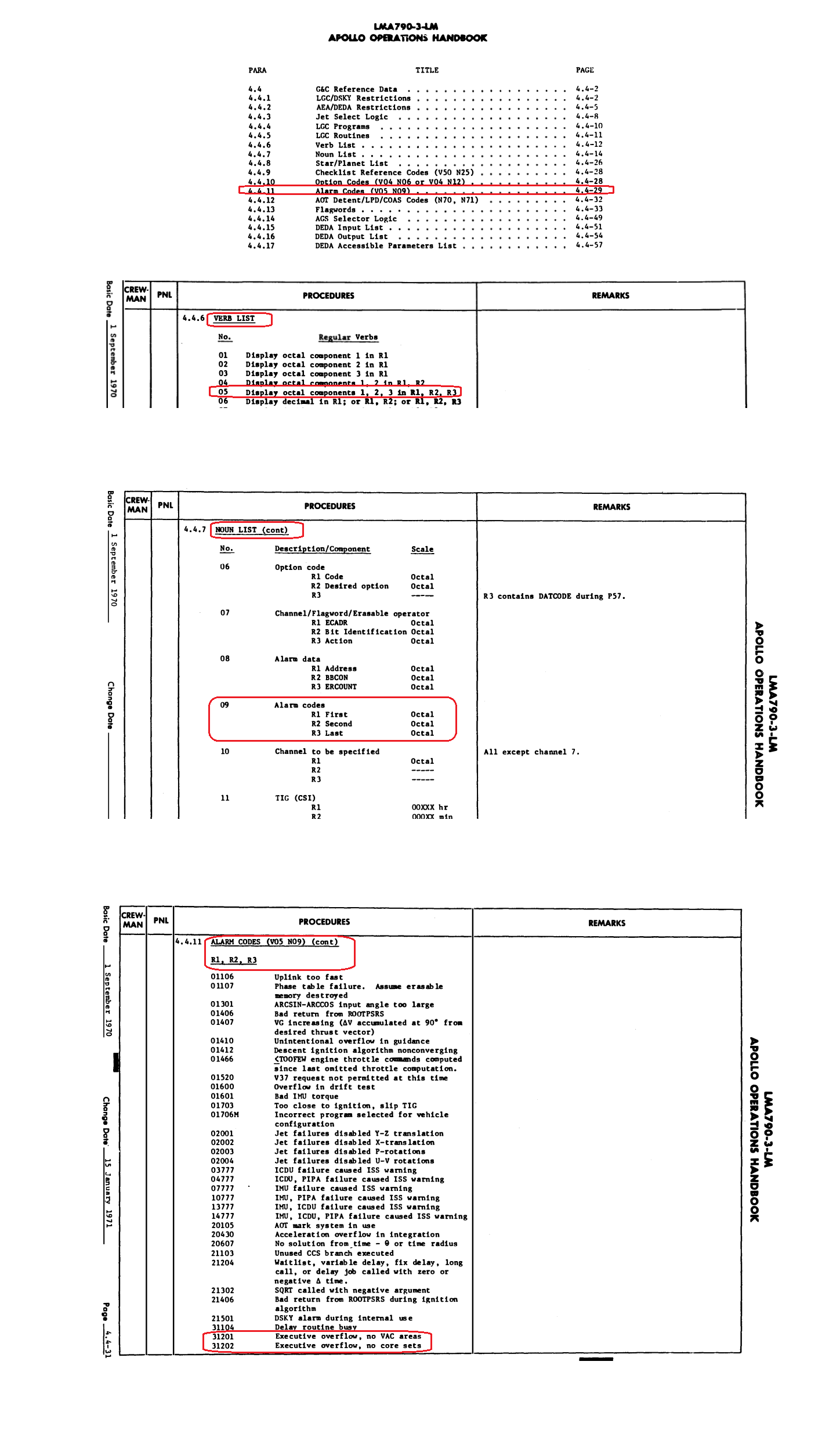 Another possible confirmation that V50N90 is an user input rather than LGC output comes from timing and flashing; in the below transcription of raw telemetries we can see that:

Hence the sequence is: 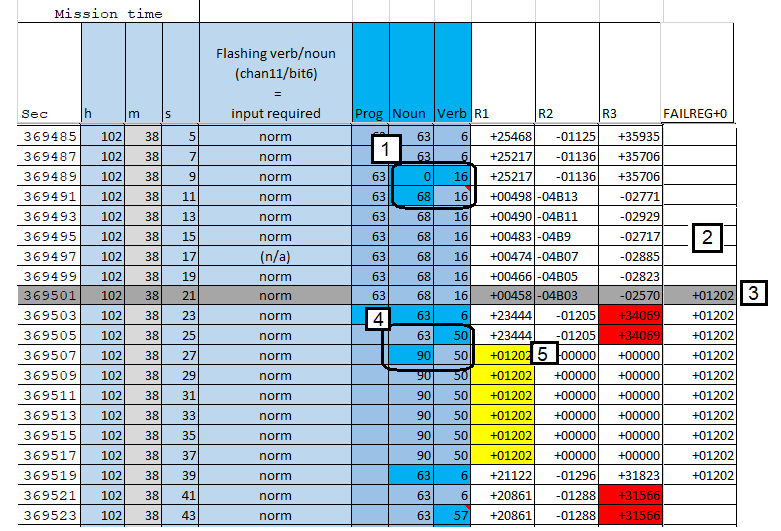 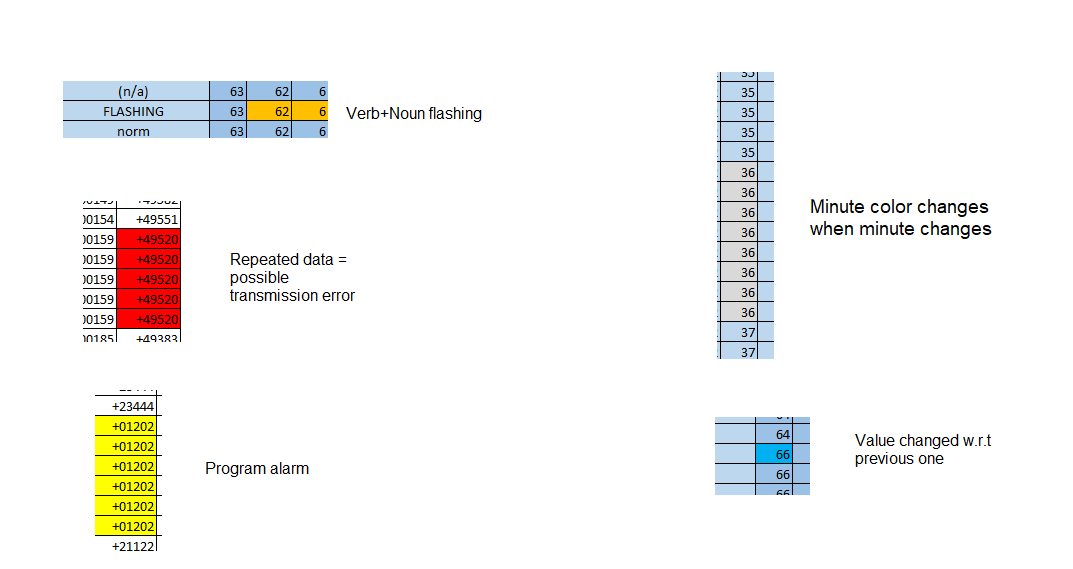 Not the answer you're looking for? Browse other questions tagged apollo-11 telemetry or ask your own question.

12
What was the procedure to stop the descent engine on the Apollo 11 LEM?
2
Were the previous Mars landers configured to transmit beacons or data during descent?
7
Provenance of the Apollo 11 landing presented in a NASA PR film
43
How did NASA choose who descended in the LEM during the Apollo missions?
6
Looking for Apollo 11 powered descent video
13
Did the 1202 error and associated reboot prevent disaster on Apollo 11 landing?
2
What do these Apollo era terms mean?
8
What was the nature of the communication problems during Apollo 11's Eagle's descent? How were other antennas selected?
19
Why didn't NASA simulate the conditions leading to the 1202 alarm during Apollo 11?
14
What did Charlie Duke mean by "down on the ground"?