What kind of signals and encodings were used to send tilt/pan commands to TV cameras on the Moon (up through Apollo)?

This answer to Has anyone in space beyond LEO seen or has anything photographed a non-pointer laser from Earth? shows a frame from video shot by Surveyor 7 on the Moon, looking at Earth, and specifically two lasers beams coming from Earth seen as two dots on Earth's nighttime side.

Unlike the retroreflectors left on the Moon that could be optimally oriented by the astronauts before they went home and modern landers like Insight that had inertial navigation systems and could orient themselves during landing, I don't think that the Surveyors couldn't possibly land such that the TV camera was already pointed at Earth.

So my premise is that the Surveyors probably received tilt/pan commands from Earth to move the camera around to look at various things, including the Earth.

Certainly the camera that broadcast the launch of the astronauts back off the Moon into lunar orbit was controlled by the ground.

Question: What kind of signals and encodings were used to send tilt/pan commands to early TV cameras on the Moon (up through Apollo)?

Were there digital commands like "pan left, 20 degrees" (or "for 5 seconds") or was it done with tones somehow, like a modulation at say 10 kHz would cause the camera to continue to pan left as long as it was turned on, or something else entirely?

note: I'll ask separately about the Soviet Lunokhod rovers as they were developed by a different space agency and researching the question will require different sources.

For the Ground-Commanded Television Assembly (GCTA) mounted on the rover that was used to image Apollo liftoffs from the moon: 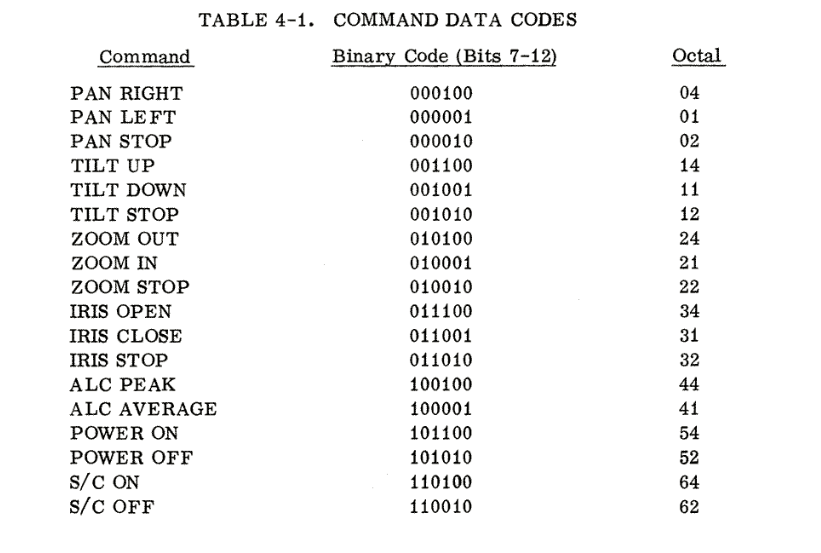 See also What is the model name of video camera that filmed the lunar lift-off?

So it was possible to start a pan right, then a tilt up, run both for a second and then stop tilt and pan using only four command messages.

and that is basically how the liftoff was imaged, sending a set of pre-planned commands based on time.

I actually sent the first command at liftoff minus three seconds. And each command was scripted, and all I was doing was looking at a clock, sending commands. I was not looking at the television. I really didn’t see it until it was over with and played back. Those were just pre-set commands that were just punched out via time. That’s the way it was followed.

Not the answer you're looking for? Browse other questions tagged apollo-program communication radio-communication ground-station surveyor-program or ask your own question.

21
How did NASA get the video camera on the Moon to track the LM ascent stage, considering the substantial delay?
4
What is the model name of video camera that filmed the lunar lift-off?
2
Has anyone in space beyond LEO seen or has anything photographed a non-pointer laser from Earth?

20
Apollo communication between the Earth and Moon
9
What was learned from study of Surveyor-3's components, retrieved and returned to Earth by Apollo-12?
34
How did the Lunar Module dock with the rest of Apollo 11 and what is the "CSM"?
29
How was the Apollo lunar liftoff video transmitted to Earth?
3
What was the view from the Apollo spacecraft while travelling to the moon?
21
How did NASA get the video camera on the Moon to track the LM ascent stage, considering the substantial delay?
5
How many Lunar Surface Hasselblad cameras were left on the Moon?
3
What kind of camera was used to produce this Apollo-era footage of the Earth?
6
What was Apollo "Moon rope" made out of? Was it ever used?