How do second stage rockets ignite their engines?

When launching, the fuel mixes and then ignites when it hits oxygen in our atmosphere.

How does a second stage ignite once in the vacuum of space?

When launching the fuel mixes and then ignites when it hits oxygen in our atmosphere.

Jet airplanes do not carry an oxidizer. Jet engines rely on oxygen in the air flowing into the engine to supply the oxidizing agent. The ignition is internal to the engine.

Presumably over-dubbed with audio from Apollo 11.

This is footage from Apollo 6, which was an unmanned test flight of the Saturn V. The camera systems, adapted to fit inside the second stage of the Saturn V by engineer Shelby Jacobs, were ejected and then retrieved by ship.

The two orange flames on the sides are [not] the igniters. They're ullage motors?

It's already being lit at the beginning of the shot; it doesn't become obvious that it's on until the engine shroud gets in the way. It was on before that and it's still on after that. It's been on since they said ["ignition"] "thrust is go; all engines".

The igniter was a spark plug somewhere inside the engine. 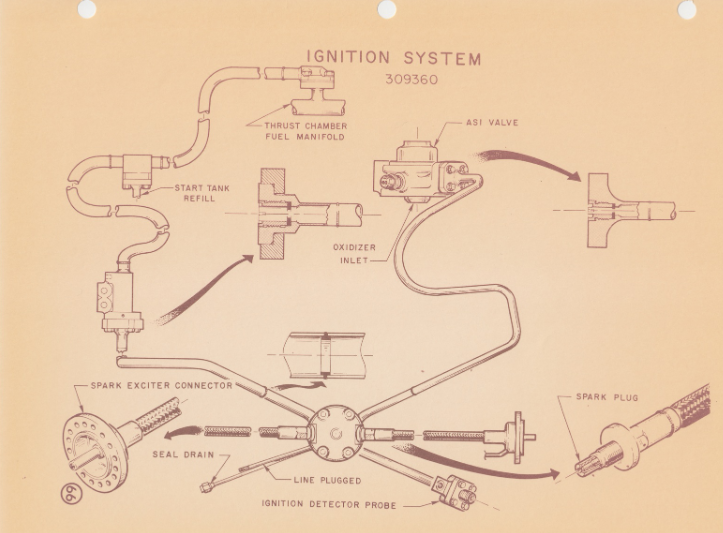 Not the answer you're looking for? Browse other questions tagged rockets engines or ask your own question.

24
Why did the Saturn V stage fairing appear to burn after separation?

17
How do rockets prevent rear-ending after stage seperation?
21
How does SpaceX ignite their engines?
8
How do you handle variations in launches with a solid second stage?
6
What auxiliary engines do the Falcon 9 first stage have?
16
What are the criteria to put the oxygen tank above or below the fuel tank for a given stage of a rocket?
25
What makes the Merlin vacuum engine so deeply throttleable?
7
Upper stage structural loads on ascent?
6
What happens to the last stage of rockets?
3
Does a rocket sound louder to the astronauts as it leaves the atmosphere?
3
How would building rockets on other planets and moons influence their design?