Could SpaceX deliver the Interim Control Module to the ISS?

Three days ago Roscosmos chief, Dmitry Rogozin, bemoaned the sanctions on Twitter saying they could break the ISS cooperation, asking Joe Biden how he'd manage to manage the course corrections given the space junk made by US businessmen, while asking who will save them, to which Elon Musk, posted the SpaceX logo and clarified that .

So were the Russian section to be uncoupled (and abandoned) from the ISS, what would SpaceX have to do?

From what I could tell they would need to get a new module up, but I am not sure (I'm not in aerospace) and it raises more questions:

The question "Can the US Part of ISS survive independent of the Russian?" finds that there is a component on the ground, the Interim Control Module (ICM), which could substitute for Zvezda, but would require a launcher that did not exist in 2014.

Is the Interim Control Module still the best replacement of Zvezda?

The question "ISS Interim Control Module specifications" (& in the comments) implies the ICM must weigh about 8000 kgs. But Falcon 9 has launched 15,000 kgs to LEO (60 Starlink satellites), let alone the increased capability of Falcon Heavy, so assuming it fits in the fairing it could launch it, right?

This question "What is the current turnaround time for Vandenberg SLC-4E" says the fasted turnaround was 22 days for a regular Falcon launch from the Vandenberg US Space Force base, but they probably could do it faster if needed. And this question "How often does ISS require re-boosting to higher orbit" suggests it's less than once a month. But I am not sure as space junk may be worse these days as suggested by Dmitry Rogozin.

So were it required, what time margin would SpaceX have?

The answer to the question "Is the Interim Control Module still the best replacement of Zvezda?" appears to be no. At least as an interim solution, one to three spacecraft may work.

On Twitter a long thread discussing the issue by the ISS editor of nasaspaceflight.com proposes that two Dragons and a Cygnus could perform attitude control. 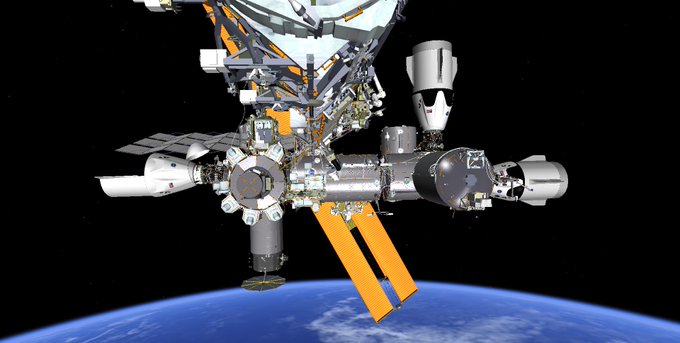 Currently, there's already a Cygnus docked from NG-17 "to perform the first operational reboost of ISS by a commercial vehicle"), but the one planned is a different one as it would need to altered to have a docking system (NDS), rather than a berthing system (CBM) in order to be attached so to thrust along the main axis of the ISS.

This would also require an International Docking Adapter (IDA) would need to be attached to the Pressurised Mating Adapter-1 (PMA-1) for one of the Dragon capsules.

The undocking of the Russian segment may provide technical difficulties as it would at the very least require EVAs to disconnect external cabling, but probably not full cabin depressurisation (as the hatch on the aft berthing port of Unity Node, which is connected to Zarya, can still be shut). Also there is the issue that Cygnus launches are tied with Roscosmos.

Side note: Zvezda and attitude control

As anyone who has played Kerbal Space Program can testify, a thrust vector away from the centre of mass provided by a docked/berthed spacecraft, even if with gimballed rockets and RCS, will result in uncontrollable spinning (loss of attitude control). In Kerbal this is mitigated with a reaction wheel, but the ISS has a 4 Control Movement Gyroscopes in the central part of the truss (Z1) (which is better). Therefore, whereas in the early days of the ISS Zvezda was crucial for attitude control it is not as much.

State of ICM and alternatives

As pointed out by @Organic_Marble and expanded by @ uhoh, the state of the ICM is non trivial. In the Wiki article it is said:

ICM was placed in a caretaker status at NRL's Payload Processing Facility in Washington, D.C. Should it become necessary to complete and launch ICM, it was estimated that it would take between two and two-and-a-half years to do so ref.

A satellite which has been mothballed and then brought back into service is the Deep Space Climate Observatory, which two articles provide information learnt from its decontamination from storage ref and ref, which was non-trivial. Therefore, where a Zvezda-replacement were actually considered, it may using a different technology such as VASIMR, whose study for its usage on the ISS was cancelled and discussed in this Q.

30
Can the US Part of ISS survive independent of the Russian?
48
How often does ISS require re-boosting to higher orbit?
8
ISS Interim Control Module Specifications
5
What is the current turnaround time for Vandenberg SLC-4E?
6
Will the ISS have electric propulsion to maintain altitude? Is there enough power for it?

32
Will the ISS need more docking ports?
3
Why did Zarya (FGB) come with a single docking port?
12
With one out of two Thermal Control Systems on ISS malfunctioning, how long can Loop B keep up with increased load?
32
Have any animals that have been studied onboard the ISS come back alive?
9
How much crew time is required for visiting craft, at the ISS?
3
What is the power required to move the space station?
14
If mice escaped on the International Space Station, could they live and thrive?
14
Does NASA have any rocket options to replace ISS segments?