Can we watch the object move towards the Moon and hit it this week at home? Will there be live telescope feeds?

I'm not even going to name the object because there's been some variability and excitement in its identification (DSCOVR 2nd stage, no not DSCOVR, it's Chinese, no not that Chinse rocket body, this one, etc.)

From Project Pluto's Corrected identification of object about to hit the moon:

Short version : back in March 2015, I (mis)identified this object as 2015-007B, the second stage of the DSCOVR spacecraft. We now have good evidence that it is actually 2014-065B, the booster for the Chang'e 5-T1 lunar mission. (It will, however, still hit the moon within a few kilometers of the predicted spot on 2022 March 4 at 12:25 UTC, within a few seconds of the predicted time. In fact, we've gotten more observations refining the impact point slightly.)

That post also includes a link to https://pastis.home.blog/2022/01/20/impact-lunaire-le-04-03-2022/ where photographs of the object show a "dotted line" because the object seems to be tumbling and oscillating dramatically in brightness (nominal ~ +16 mag)

Question: Can we watch the object hit the Moon this week at home? Will there be live telescope feeds just in case there's a plume?

I think it's going to hit the far side of the Moon so the chances of seeing anything thrown up by the impact are probably very low.

But it is an object tracked by reflected sunlight seen in optical telescopes, so it will be a star-like dot that moves towards the Moon and then disappear behind it.

Can we watch that at home somehow?

"bonus points:" Does anybody know how fast it will appear to move towards the Moon? 1 degree per second? Faster? Slower?

Big thanks to @PM2Ring for pointing us to the HORIZONS data!

I used the HORIZONS data to create an animation of the objects trajectory to get a better sense of potential observation geometry:

The low solar phase angle leading up to and at impact makes observations difficult if not impossible due to the (relatively) bright twilight sky. This animation also shows that (from an Earth perspective) it is more so the Moon slamming into the impactor!

The angular separation rate is shown in this plot below (50 point smoothing): 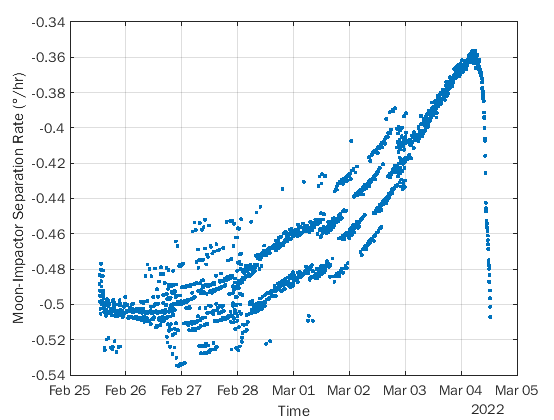 It looks ugly because of the aforementioned low resolution data causing the sort of "bounce" seen (note that this is reduced significantly in this plot because of the 50 point moving average used to smooth out the undesired "bounce").

A reminder that there is no live tracking of the impacting rocket stage. Based on observations made weeks ago, we're confident that it will hit Hertzprung crater at 1225 UTC Mar 4, because we trust Uncle Isaac - successfully predicting the trajectory of things in space since 1687

This is surprisingly misleading since a big factor limiting the accuracy of trajectory prediction for empty rocket bodies is that they are large, highly reflective, relatively low average density, and can tumble chaotically, so they get pushed around by solar photon pressure.

It's exactly the non- Newtonian forces that make cis-lunar and heliocentric rocket body trajectories so challenging in the first place!

18
Is this what station keeping maneuvers look like, or just glitches in data? (SOHO via Horizons)
11
Is JWST Halo orbit prograde or retrograde and why?
10
Why do the LRO's orbital elements appear to constantly oscillate - except recently?
4
Where will the March 4, 2022 impactor hit the Moon? Will it be visible from Earth?
4
How well can the orbits of Jupiter Trojans to be visited by Lucy be predicted?
6
Did Rosetta improve on models of non-gravitational effects on comet 67P's orbit?
3
Where will the DSCOVR mission Falcon 9 2nd stage rocket body end up?

5
Why did we think that the object was gonna hit the Moon March 4th 2022? Who's been tracking and predicting it so closely?
4
Where will the March 4, 2022 impactor hit the Moon? Will it be visible from Earth?
1
Project Pluto asks: "Should high-flying space junk be better tracked? Perhaps by an 'official' agency of some sort?" What would it take to implement?
2
Is it true that 18SPCS is "not really concerned with tracking deep-space debris like" the Chang’e 5-T1 rocket body that hit the Moon?