I am guessing the word CPU can't be used in reference to computers in 1971. So I am wondering what type of electronic equipment were put in place of a regular CPU on Mariner 9 spacecraft?

I see the following operations needed to be achieved:

I also see that:

Mariner 9's computer was thus reprogrammed from Earth to delay imaging of the surface for a couple of months until the dust settled.

So what type of CPU/RAM was used at that time?

Mariner 9 used magnetic core memory. It had the awesome amount of 512 words (quadrupled from the original design as requirements grew).

The document never actually comes out and says so, but it's clear from this description of a problem they had:

The memory vacuum problem became evident the first time the memory was subjected to vacuum as part of the required TA test. This vacuum sensitivity, which resulted in catastrophic failure of the magnetic-core memory plane, was traced to trapped air underneath the polyurethane-coated memory plane. Under vacuum this trapped air expanded underneath the plane such that the very fine magnet wire that is strung through the magnetic cores was stretched and broken. The solution to the problem was, of course, the elimination of the trapped air. This was accomplished by more careful application of a two-sided adhesive tape used to hold the magnetic-core plane to the mounting board, and better application of the polyurethane coating material.

Information on the computer can be found in the design document referenced in the one linked above.

The other subsystem capable of commanding spacecraft events is the CC&S. Figure 9 shows the CC&S with its functional interfaces. Basically, the CC&S is a special purpose computer which has extreme flexibility and can be reprogrammed in flight. Its primary purpose is to provide event actuation at certain times which are specified prior to launch. 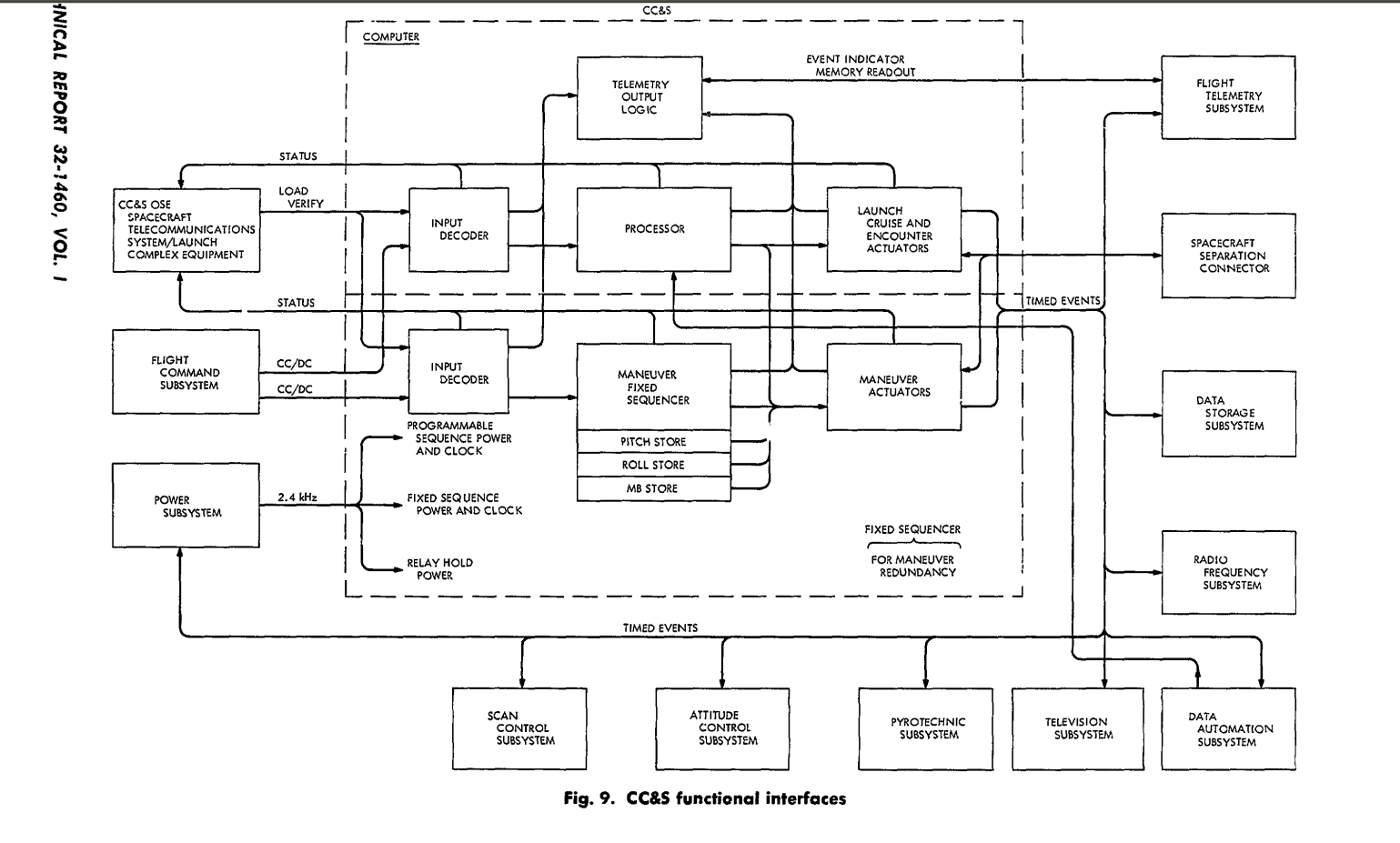 This document also reveals that the word length was 22 bits.

Not the answer you're looking for? Browse other questions tagged history spacecraft flight-computer mariner or ask your own question.

14
Do Mariner 4 hand rendered images still exist?
5
Why Mariner 10 was instructed to turn off [transmitter]?
34
Why is there a large wooden ball on Mariner 3's magnetometer?
0
How did Mariner 2's ridged radiometer dish focus two microwave bands but diffuse IR?
6
How was the name of the Mariner Program chosen?
3
What are the louver-like structures on the sides of the Mariner 4 probe?
7
What was Mariner 10's lowest perihelion radius?
3
How to understand this complicated plot for Mariner 4's mid-course correction (to Mars)?
5
What Voyager spacecraft hardware performed transmitted data coding in such a complicated way? Did ground decoding use “a big monster filling a rack”?