What is "trade space" in the context of libration orbit mission design? (used in trade analysis, launch window analysis and trade study)

The James Webb Space Telescope (JWST) is a large-scale space telescope mission designed to study fundamental astrophysical questions. General topics include studying the assembly of galaxies, planetary systems / origin of life, birth of stars / proto-planetary systems and the concept of first light / re-ionization. One of the primary trade analyses for JWST determines when the observatory can successfully launch. This is traditionally called the launch window trade analysis.

This paper presents the first launch window analysis for JWST with the inclusion of higher fidelity propulsion finite-burn modeling. Significant requirements affecting the JWST orbit design are the overall Libration Point Orbit (LPO) size, the avoidance of any Earth/Moon eclipses, and propulsion/other hardware restrictions. This launch window trade analysis focuses on meeting these requirements and finds feasible epochs to launch the JWST observatory under these conditions. The paper first presents an in-depth view of the JWST mission with emphasis on the requirements and constraints affecting the launch window analysis. The full trade study is then described alongside its methodology. Finally, results that observe the overall nature of the launch window with the updated JWST models are presented with final conclusions and future development.

Over a single launch day, the JWST orbit launch time is critical to its success. The allowable daily launch window exists within the launch window trade space of 11:30 ‚Äì 14:00 UTC.

Question: What is "trade space" in the context of libration orbit mission design? (used in trade analysis and trade study) 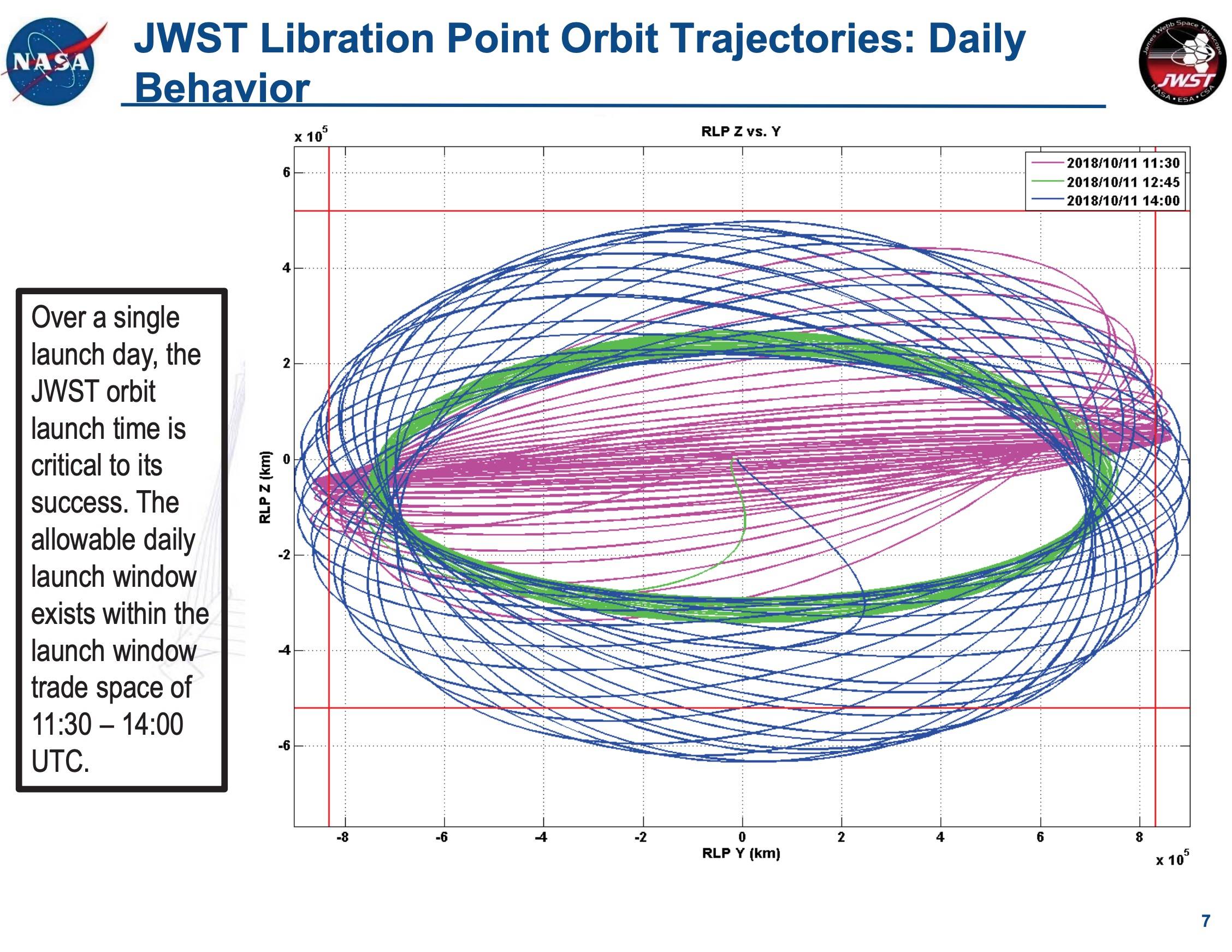 It's just a space in the mathematical sense, the range of input variables which the trade off considers.

Not the answer you're looking for? Browse other questions tagged mission-design terminology james-webb-telescope or ask your own question.

13
Why Orion can't be used to service JWST?
6
How will JWST manage solar pressure effects to maintain attitude and station keep it's unstable orbit?
5
Will WFIRST and JWST be able to resolve each other?
9
How does one test Ground Segment communications with, and "downlink" data from a spacecraft that's still on the ground?
9
The design of the halo orbit of the James Webb Space Telescope
4
Why does JWST need "a carefully designed series of oscillations" to avoid overheating during the 2nd stage burn? Why not rotate "rotisserie style"?
35
Why is JWST parked in sunlight, rather than using a nuclear battery?
10
Is JWST Halo orbit prograde or retrograde and why?