What is the purpose of these three taut cables near an ISS astronaut during EVA? To what do they connect and why do two appear intertwined?

During CBS News senior space analyst Bill Harwood's explanations in the video Russia's space agency severs ties with the U.S. and its European partners they keep showing the same five seconds of an ISS EVA over and over. What I find distressing is the three taut cables in the vicinity of the astronaut, two of which appear tangled/twisted/intertwined, and one of which looks like it might be attached to the astronaut's glove.

I can understand what is actually happening here, what the cables are for or to what they attach on their in- or less-visible ends.

Question: What is the purpose of these three taut cables near an ISS astronaut during EVA? To what do they connect and why do two appear intertwined? Does one connect to the astronaut's glove?

Here are some screen captures from the video; annotated, cropped and otherwise "enhanced" with the goal of simply helping to indicate what I think I'm seeing. 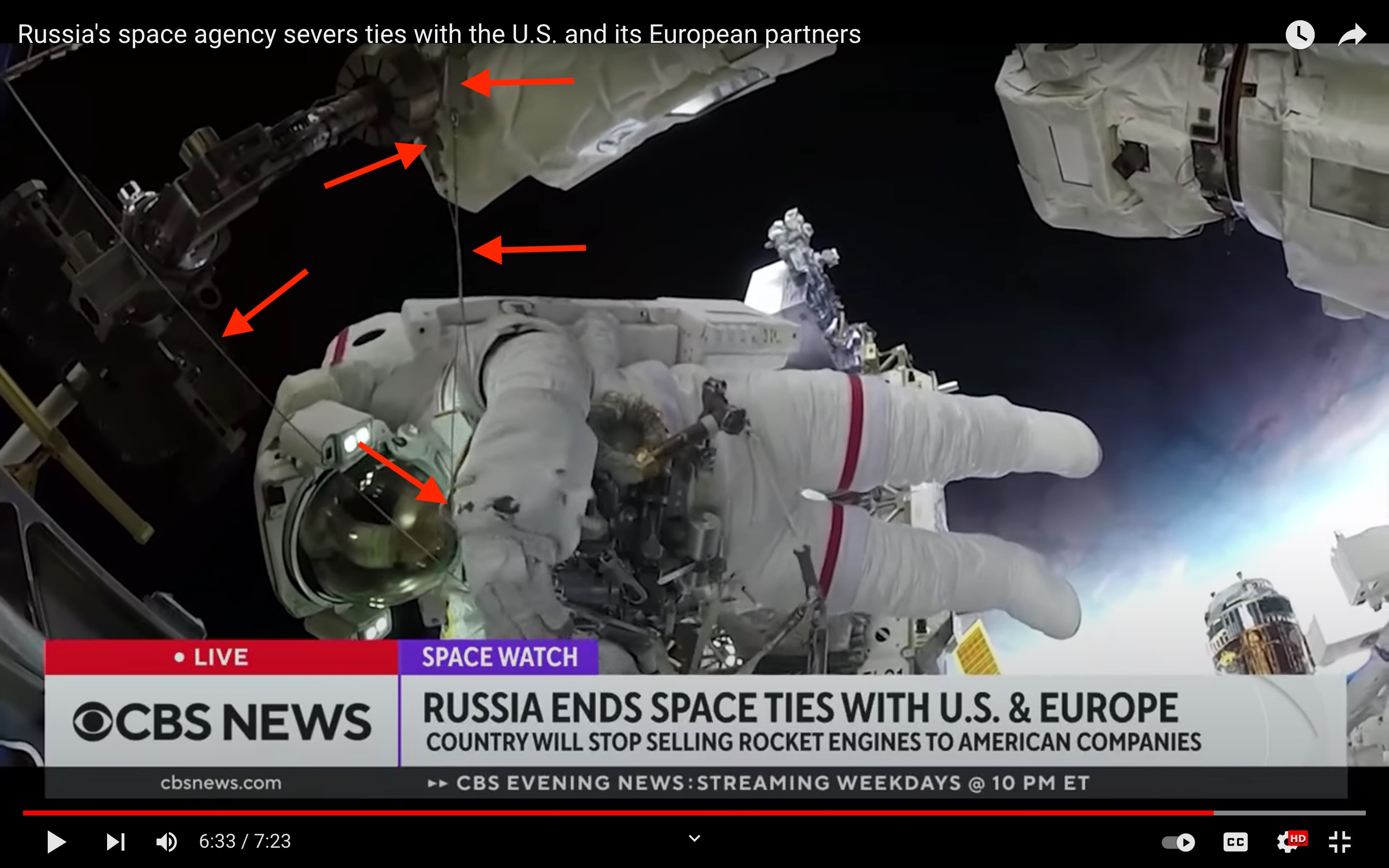 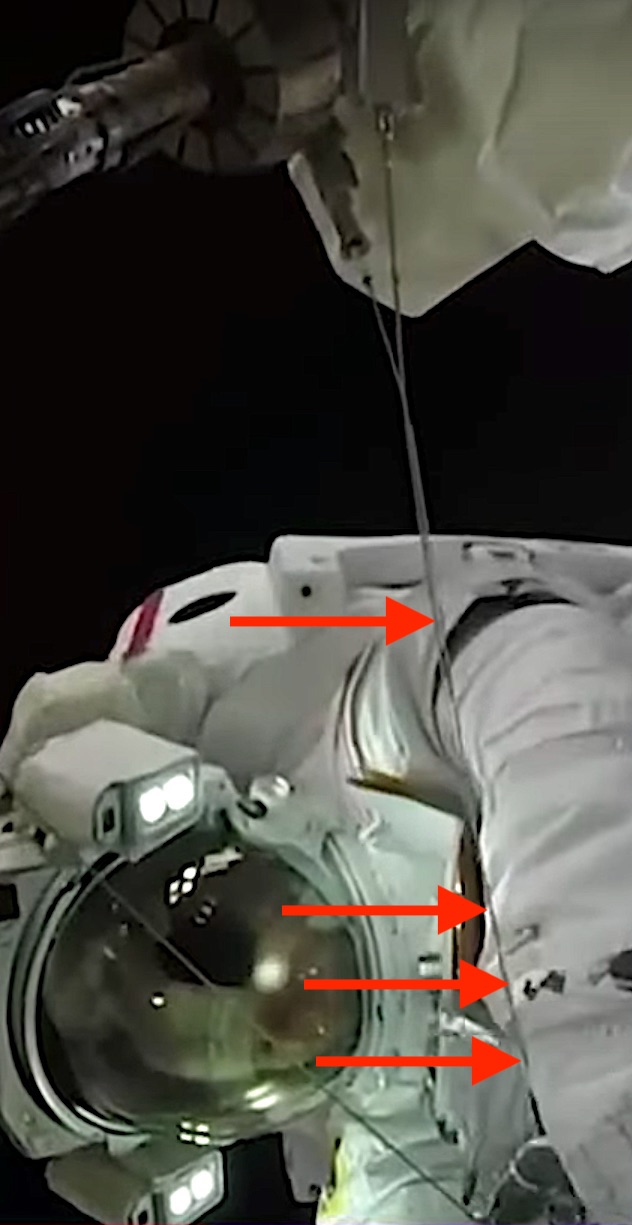 Partial answer with info to help other answerers -

The picture was taken, probably from the helmet cam of the other EVA person, at a point on the P4 truss. The view point is right above where the thermal radiator sprouts out of the P4.

I attempted to duplicate the view but failed due to lack of knowledge of the SSRMS configuration. I can nevertheless identify many objects in the view which might help other answerers. 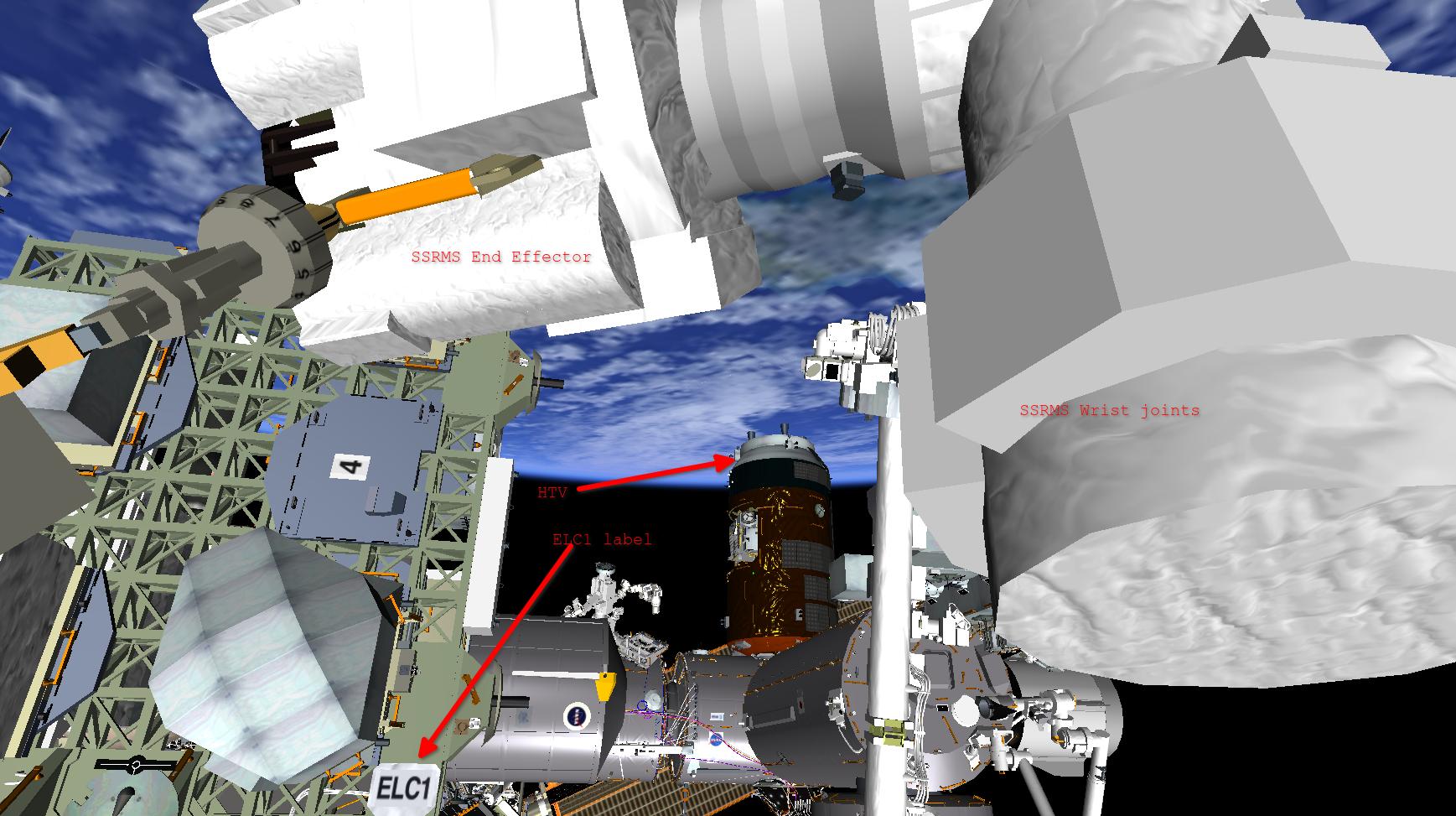 You can see that I don't have the SSRMS in exactly the right place here, and my patience at trial and error for it is limited. The viewpoint is not right either. But it's close enough to ID the location and major features.

The two twisted tethers are attached at the top of the picture to the SSRMS end effector or the Articulating Portable Foot Restraint (APFR) which is also attached to the end effector. (The APFR has a numbered dial on it.) One of these is a safety tether for the EVA crewmember, the other likely is for whatever they are working on.

Since I don't know which (I could not ID the particular EVA) this must be a partial answer.

Image generated using the NASA tool DOUG, available for the price of filling out some government forms.

9
What is the purpose of the helium and argon gas supplies on ISS?
1
Why are the ISS attitude values shown on these two web sites so different?
5
What is the purpose of the "shaft" and "block" in these two different engine gimbal joints?
21
What are these green text/line displays shown during the livestream of Crew Dragon's approach to dock with the ISS?
1
What cubesats are these, what flags are on them, and why? What's the background story?
0
Why do these two Hubble Space Telescope star cameras point in nearly the same direction, and what's the other window for?
2
Which S-Band ISS antenna stopped transmitting to TDRS and was replaced during the recent 2021-12-02 EVA?
1
What are all these packages attached to a side module of the ISS? How did they all get there?
3
What's this small source of glowing blue plasma next to Psyche's Hall effect thruster for? What does it do and why does the plasma curve and connect?