What's this small source of glowing blue plasma next to Psyche's Hall effect thruster for? What does it do and why does the plasma curve and connect?

PV Magazine's NASA’s 1.5 billion-mile Psyche asteroid mission will be solar-powered includes the image below which is PIA24030 and the relevent part of the NASA caption is:

The right image shows the business end of a large Hall effect thruster with an annular opening from which the bright glow of plasma can be seen in the left image.

Immediately above the thruster is a small cylindrical device with a small central opening, and the image on the left shows a similar but more purplish glow from it. If we follow the glow out of this small device it suddenly takes a 90 degree turn towards the ion engine's "exhaust plume" and joins the big glow from the engine, with a color gradient from purplish to blue.

At least that's how it appears to me.

Question:: What's this small source of glowing blue plasma next to Psyche's Hall effect thruster for? What does it do and why does the plasma take a right-angle turn and connect to the main engine's glowing plasma "exhaust plume"? 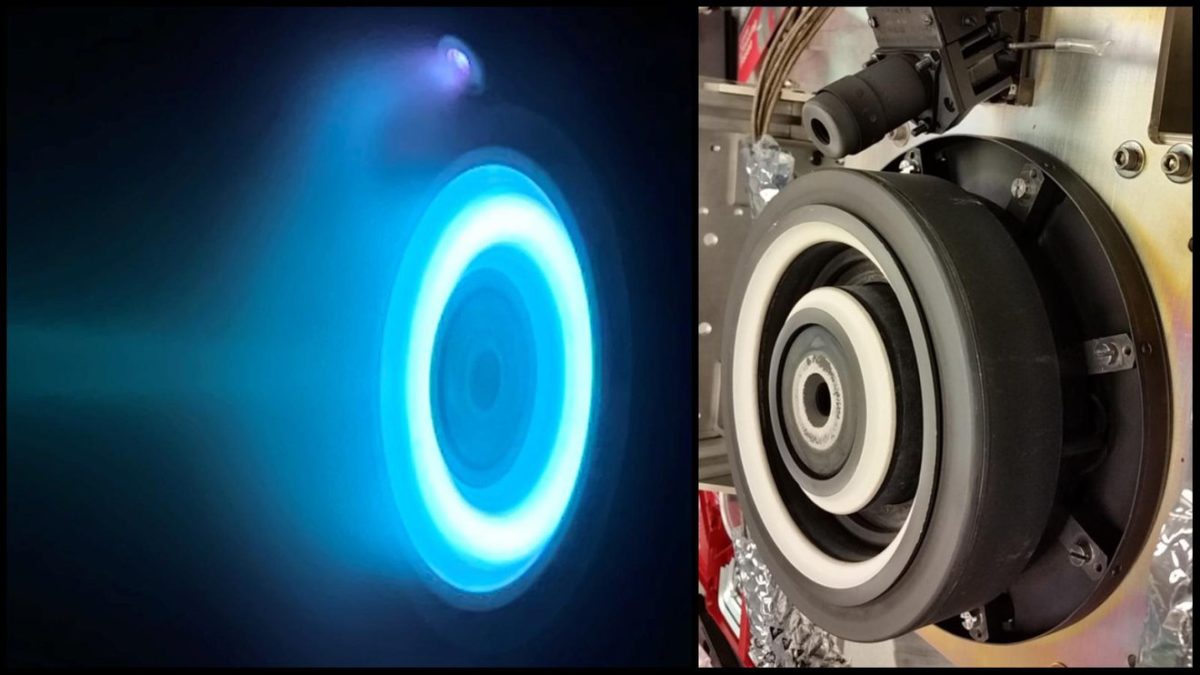 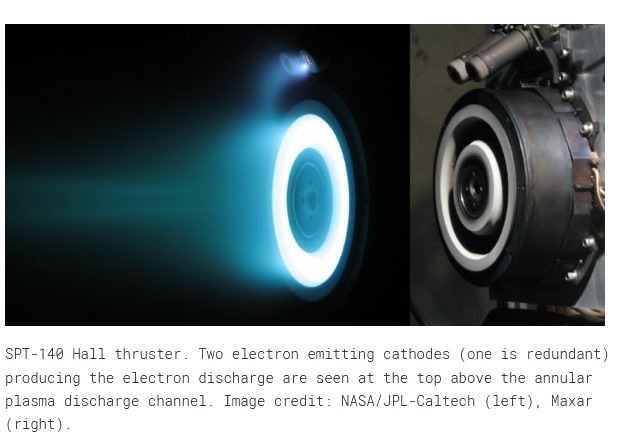 Psyche will actually use Hall thrusters, not ion thrusters, but I started with ion thrusters because Hall thrusters are a lot harder to explain. Hall thrusters don’t use high voltage grids, but do use an electron discharge to produce the plasma. In this case, the hollow cathode is outside the thruster and the electron collector (remember it’s called the anode?) is inside. The electrons are very light and fast, and all the power we apply would just go into the electron current flowing to the anode and blue glow if that was all we did. Instead, we apply a magnetic field to force the electrons to go in circular orbits around the center of the thruster. The magnetic field impedes the electron motion to the anode, which allows the ions that are generated in this discharge to be accelerated by the field between anode and cathode. The ions are too massive to be affected by the weak magnetic field, and are shot out of the channel to form the beam and make thrust. This circular electron motion is why Hall thrusters have that annular channel full of glowing plasma you see in all the photos of these thrusters. Since the acceleration happens within the plasma, the ions can drag enough electrons from the discharge with them to automatically neutralize the charge build up that I described above for ion thrusters.

A Hall thruster uses an electron discharge to create a plasma—a quasi-neutral collection of positive ions and electrons—not unlike what goes on in a fluorescent lamp.

The thruster includes a hollow cathode (negative electrode), placed outside the thruster body, and an anode (positive electrode) positioned inside a ring-shaped discharge chamber. If these electrodes were all there was, the power applied to the thruster would just go into making a current of electrons flowing from cathode to anode, emitting some blue glow along the way. Instead, a Hall thruster applies a radially directed magnetic field across its discharge channel.

The electrons emitted by the cathode are very light and fast. So this magnetic field impedes the flow of electrons to the anode, forcing them instead to go in circular orbits around the center line of the thruster. The positive xenon ions that are generated inside the discharge chamber accelerate toward the cloud of circling electrons, but these ions are too massive to be affected by the weak magnetic field. So they shoot straight out in a beam, sweeping up electrons along the way. The ejection of that material at high speed creates thrust. It’s not much thrust—equal to about the weight of a few quarters—but applied steadily for months on end, it’s enough to get the spacecraft zooming.

9
How is charge dissipated in ion-propulsed spacecraft?
5
Is there any possible reason to direct the electron gun specifically towards the ion trail behind an ion thruster?

6
What is this perturbation effect called, and what would be an analytical expression for the resulting eccentricity oscillations?
2
What could be the proprietary propellant blend that "Apollo Fusion" claims to have developed for it's hall effect thrusters?
11
What is this balloon for in this clean room and what is the proper name for the "stand" that is holding the satellite?
2
What are these mysterious white star-like dots near MU69 Ultima Thule? Real objects near the asteroid, noise, cosmic rays, or something else?
11
What does this SpaceX tweeted photo show and what causes the pure red and blue color?
1
What cubesats are these, what flags are on them, and why? What's the background story?
0
Why do these two Hubble Space Telescope star cameras point in nearly the same direction, and what's the other window for?
8
What is the blue and purple glitter dinosaur above NASA astronaut Robert Behnken in this video?
8
What is this South Korean rocket and why does it have separate yellow and blue exhaust plumes?
7
What is the purpose of these three taut cables near an ISS astronaut during EVA? To what do they connect and why do two appear intertwined?