How exactly does depressurization work in a solid rocket motor?

How does the extinction process actually work in a solid rocket motor?

Most people initially always read that once a solid rocket fuel is ignited there is no way to actually stop its operation until the solid grain burns completely. But I came across the concept of quenching and depressurization and that it is possible to stop a solid rocket burn when one wishes to do so. I saw a video mentioning that decreasing the chamber pressure rapidly will also cause a sharp drop in the regression rate which is right since they are both related but it was also mentioned that the burn area is dependent on the chamber pressure.

How does the burn area and quenching come into the picture? The details on this aren't very clear to me as well.

I have never throttled a solid fuel rocket, so the following answer is theoretical rather than experience-based.

I find the best way to understand propellants (explosives, ballistic propellants and solid fuel rockets) is through the pressure/burn rate curve. Empiric curves can be produced from data gathered in an experimental chamber where a stick of propellant is ignited under controlled pressure. 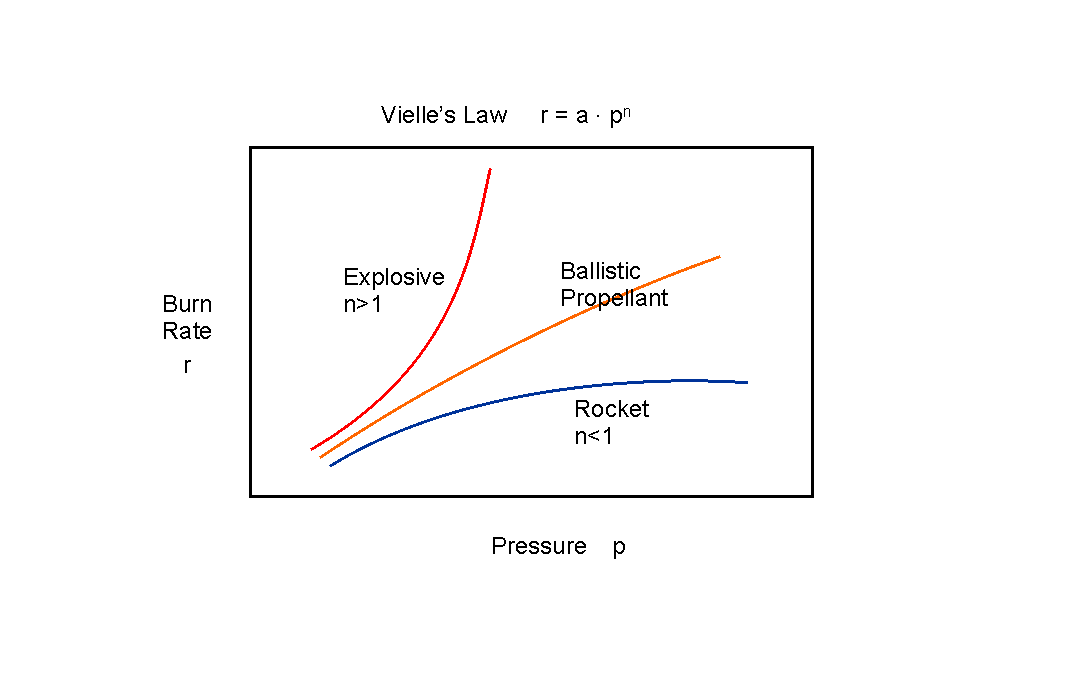 The theoretical formula for these curves is Vielle’s Law . “a” is a constant. “n” is the pressure exponent characteristic of the propellant in question.

Note that if the exponent n>1, the propellant goes “boom” and we call it an explosive. We would not consider trying this propellant as a rocket fuel.

If n<1, the pressure tends to top out in a stable fashion and we consider the propellant a candidate for rocket fuel.

Ballistic propellants are somewhere in between.

Propellant burn rates increase with pressure because the higher density transfers heat faster to unburned solid fuel, decomposing it into gasses which can take part in further combustion.

Note also that, according to the Law, if pressure p=0, the burn rate is r=0. This means (in theory) if you removed pressure from the combustion chamber, the burn would be extinguished.

Quenching of a solid fuel rocket can be achieved through rapid depressurization. https://apps.dtic.mil/sti/pdfs/AD0711436.pdf Basically, the depressurization stops heat flow from the hot combustion chamber flame into the unburned solid fuel.

An imperfect analogy would be blowing out a candle flame: rapid air movement prevents heat transfer from the flame to the new fuel (liquid paraffin in the wick).

Burn area would not be affected by depressurization.

Not the answer you're looking for? Browse other questions tagged rockets propulsion solid-fuel or ask your own question.