The JWST vehicle temperature displayed on the Where is Webb site seem to have stabilised. They have not noted a change in several days. Is the current temperature, the stable equilibrated values with little or no future changes to be anticipated or are there more steps to attaining the "stable" configuration.

I seem to recollect that lower values (closer to absolute zero) were mentioned for the final temperature on the cold side a while ago but I have no reference that I can recollect.

Wikipedia page for MIRI mentions that the science module it will be installed in has a target temperature of "about 40K". Several bits are in that neighborhood now, so yes I'd agree that much of the cold side appears to be near equilibrium values.

The MIRI instrument itself will be actively cooled (closer to 7K), but the project update from March 17 suggests that the chiller won't start until after some observations happen (with no estimated date given).

Webb’s mid-infrared instrument, MIRI, will be the last instrument that is aligned, as it is still waiting for the cryogenic cooler to chill it to its final operating temperature, just under 7 degrees above absolute zero. Interspersed within the initial MIMF observations, the two stages of the cooler will be turned on to bring MIRI to its operating temperature.

added April 2 2022 NASA's 'Where is Webb?' site has added link to GREAT interactive graph of time/temp for the Webb instruments! 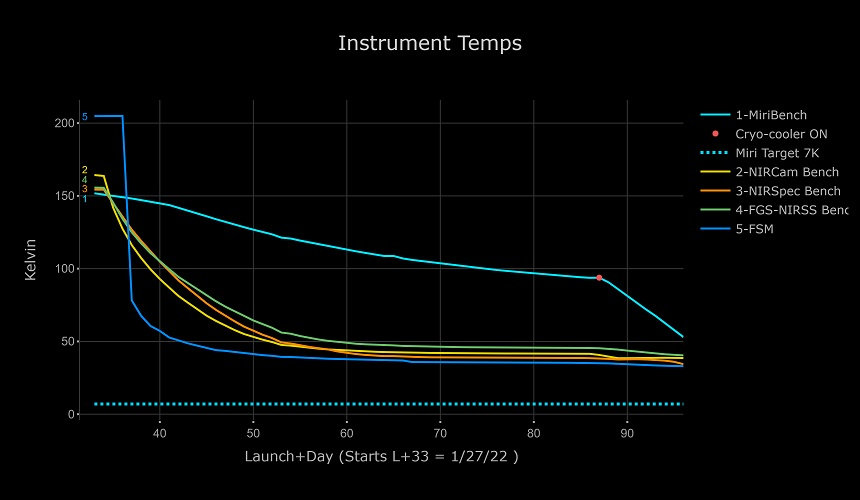 Not the answer you're looking for? Browse other questions tagged james-webb-telescope temperature or ask your own question.

20
Would temperatures be more stable under the surface of Mercury?
4
Friendly temperatures at day/night junction in Mercury?
19
Why are JWST optics not enclosed like HST?
4
Would it have been cheaper and/or faster to put a James Webb-like Space Telescope on a balloon instead of a rocket?
7
Why are the JWST secondary mirror support booms not painted black?
10
Where to find the data to graph JWST temperature since launch?