How fast are Ingenuity's knees wearing out?

By plastically deforming and fatiguing as it absorbs energy, this flexure acts much like the crumple zone structure of a car chassis. However, unlike a car or the crumple-cushioned landing gear of the Apollo moon landers, Ingenuity’s titanium springs rebound after each impact to pull these aluminum dampers back into shape for the next landing. The aluminum damper gets a little bit weaker with each cycle as cracks and creases develop. While it would eventually break after a few hundred hard landings, with only a few flights scheduled for this demonstration, that’s a problem we could only dream of having.

Almost a year later, it's had 23 flights. Have any of its sensors, such as its IMU or altimeter, yet been able to detect how quickly this expected gradual cracking is developing? Has some threshold been chosen, beyond which Ingenuity should stick to only gentle landings?

BrendanLuke15's comment's linked paper says the damper is "1100-series annealed aluminum" whose damping is "largely independent of temperature or atmospheric pressure." But how does one apply fatigue datasheets for 1100 to this particular shape (1 x 2 cm? 0.5 mm thick? deflecting how much and how fast)? How differently would a partially fatigued damper behave (as if it were half as thick because of cracks)? Could that behavior be measured by Ingenuity?

Let me open by saying I do not have an answer.

Thanks BrendanLuke15 for linking to the knee detail image!!

While question is more "design/engineering" than "space exploration"... still very fun to consider!

I used a 1000 series aluminum in a design about 30 years ago. I do not recall the specific alloy, but I selected it because it was almost dead soft. This 1100 alloy damper is very similar in properties. It is not heat treatable, nor would one want higher properties.

I suspect Camille Goudeseune recognises that Ingenuity will not be significantly compromised if the dampers break, but my concern would be uneven bounce when some dampers break and others don't.

The dampers are not load bearing elements and the legs will still hold Ingenuity when dampers break.

my comments in red 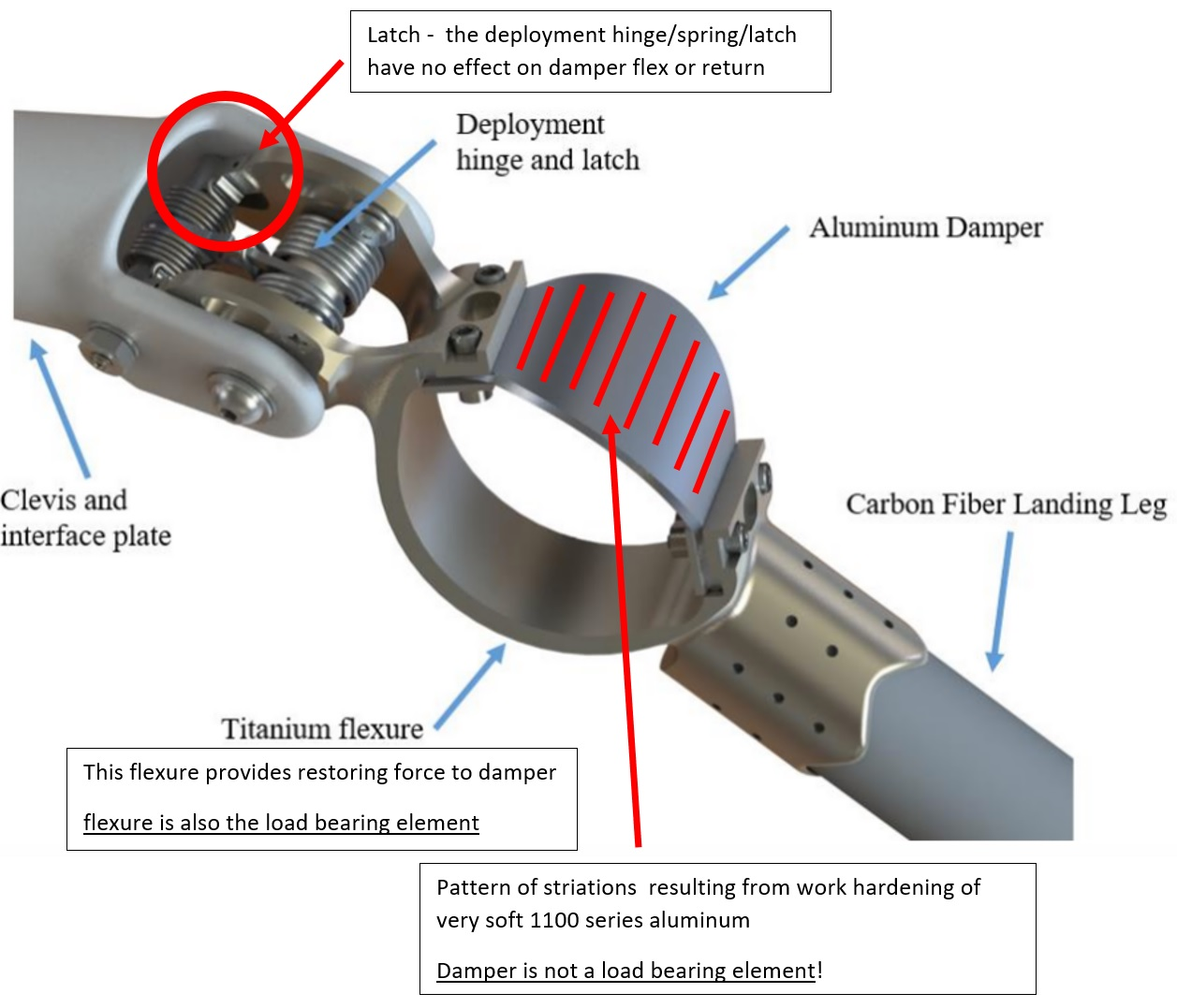 Not the answer you're looking for? Browse other questions tagged landing ingenuity sensors legs lifetime or ask your own question.

9
SpaceX Landing Platform video: why is the rocket moving so fast?
13
How does a gamma ray altimeter work? What kind of sensor is used?
25
How much more expensive are scientific instruments for space use?
32
Why were contact sensors put on three of the Lunar Module's four legs? Did they ever bend and stick out sideways?
2
Why are these Soyuz Astronauts/Cosmonauts wearing sun glasses and a blanket after landing?
15
Why do Ingenuity's legs differ?
4
Are there any illustrations/animations which show how Ingenuity is stored on Perseverance & how it is perpared for launch?
2
Would Ingenuity's cameras be capable to spot and/or make close-ups of possible biosignatures?
1
Where are Ingenuity's two swashplates and six servos? I only see one of each in this NASA/JPL-Caltech photo