Solid Core Antimatter Engines: Do they have a point?

On the graph discussed in this question, I was surprised to see "antimatter" listed as one of the engine types... with a disappointing performance equal to solid-core nuclear thermal rockets. This implies that an extremely small amount of antimatter is being annihilated in a solid core that then heats hydrogen propellant. This seems somewhat of a quixotic downgrade from the fabled antimatter photon rocket.

Is this engine type, which inevitably requires an extremely dangerous fuel and has extremely low TRL, considered to have any worthwhile benefit over a nuclear-fission-driven solid-core nuclear rocket? Is there some reason that antimatter would be easier to manage than fission fuel?

To make it clear what is being discussed is the blob labeled "Nuclear, antimatter, laser (H2)" in the graph below. The blob in question has a specific impulse of 800 to 1000 seconds and a thrust ranging from a bit more than one newton to beyond a kilonewton. 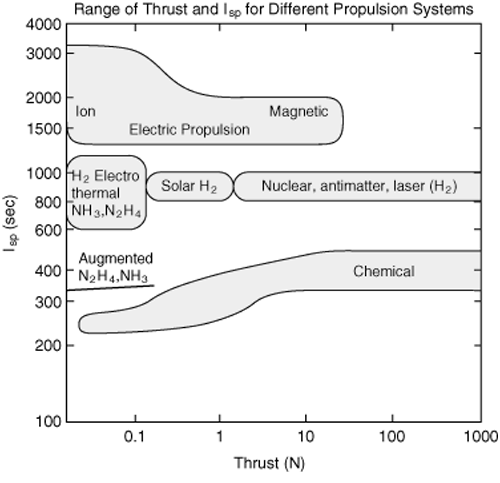 The graph appears to be depicting an engine that uses fusion, fission, lasers, or even matter-antimatter annihilation to heat hydrogen to a very high temperature and then emit that very hot hydrogen as the propellant. This will have a specific impulse in the 800 to 1000 second range depicted in the graph. There's only so far that a thermal rocket can go with regard to heating without having key parts of the rocket melt. Per the US Office of Nuclear Energy, the initial target for the specific impulse from a thermal nuclear rocket is about 900 seconds.

TL;DR: solid core antimatter rockets basically are the same as solid-core nuclear thermal rockets, which is why they have pretty similar performance figures. 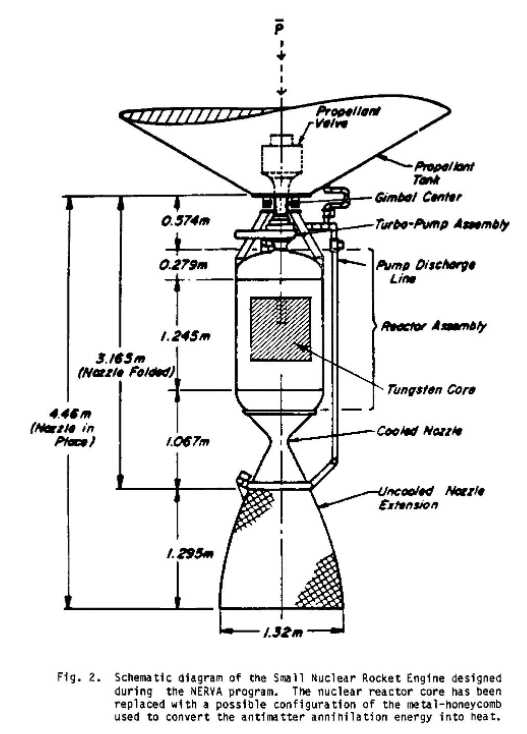 Here's a diagram from Antimatter propulsion, status and prospects from waaay back in 1986.

Solid Core Thermal Rocket (SCTR). The SCTR would utilize the antiprotons by stopping all of the annihilation products In a solid core of high-melting-temperature material such as tungsten. The core is honeycombed to allow the heat transfer to the propellent.

Much like the solid core nuclear thermal rocket, this rocket design is limited by the material limits of the heat exchanger and rocket nozzle and so on... if it gets too hot, it melts, and the whole lot shoots out of the back in an embarrassing mess. This means that such a rocket is going to have almost the same operating limits as a solid core NTR, including similar thrust and Isp values. Hence its mention in the 1000 seconds, high-thrust section. I'm not sure why other kinds of antimatter propulsion weren't considered, but there you go.

Is this engine type, which inevitably requires an extremely dangerous fuel and has extremely low TRL, considered to have any worthwhile benefit over a nuclear-fission-driven solid-core nuclear rocket? Is there some reason that antimatter would be easier to manage than fission fuel?

With regards to the danger of the system, it was anticipated that a typical mission for such a rocket would use somewhere between a few tens and a few hundred milligrams of antiprotons, giving an equivalent yield to maybe 20kT max. For comparison that's an order of magnitude worse than the N1 explosion. At least there would be basically no fallout, if it happened on the ground.

Assuming that isn't an immediate deal breaker though, consider the following:

The big problem, to my mind at least, is that unless you have an economical source of antimatter and mature antimatter storage technology, it will just be pointlessly expensive to operate. Maybe the authors of the paper I linked above, and the labellers of your diagram, had unreasonably optimistic expectations of future antimatter production?

Consider that if you've got even as little as microgram levels of antimatter handy the possibilities of things like Antimatter Catalyzed Microfission or other similar tricks (you can probably use small quantities of antimatter to heat up fusion fuels nicely too) that seem far cheaper and more straightforward and might even give you an awful lot more Isp for your buck than any purely antimatter fuelled drive that doesn't use ridiculous amounts of the stuff.

Not the answer you're looking for? Browse other questions tagged design-alternative nuclear advanced-propulsion antimatter or ask your own question.

10
Why do chemical rockets encompass a weird shape on this thrust vs. Isp graph?

18
Why can't they just drop a solar winch down from a shuttle and have planes fly up and clip things on?
4
LANTR has been proposed; why not bilateral CHEMANTR?
22
Why is it not concerning from a cost perspective to have so many engines on Starship?