The main purpose of the large black/white patterns on many of the early rockets was to make it easier to spot whether the rocket is rolling. The pattern on the Saturn V was changed to avoid picking up too much heat on the black paint.

But do the patterns on the SLS still serve the same purpose? On this picture one can see the small, rectangular patterns on the upper fairings, on the top of the main tank and the boosters. 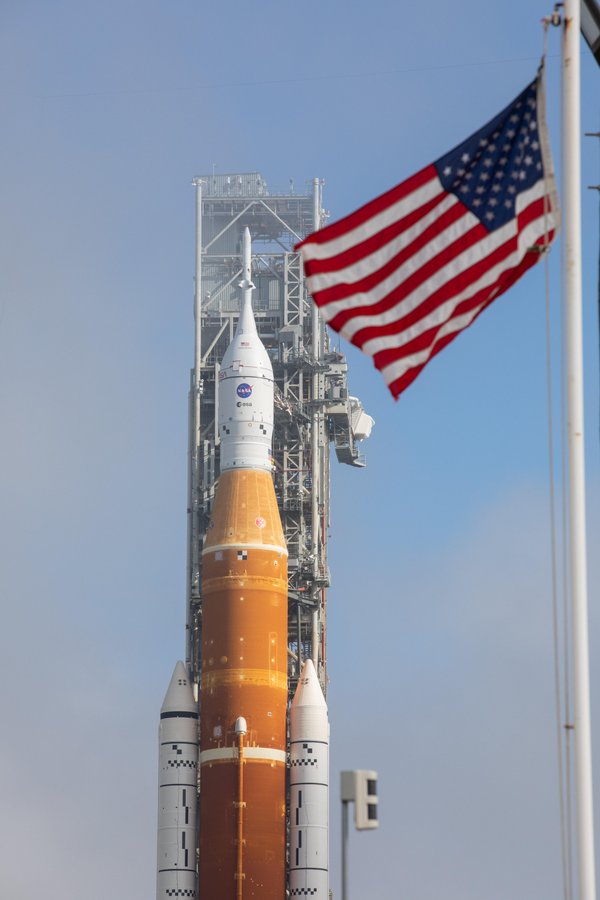 Sure, cameras are better than they were in the days of the Apollo Missions, but are these small patterns large enough to be spotted during launch?

So, are these still roll patterns or do these patterns serve any other/additional purpose?

On the boosters there are the same 2x2 patterns as on the fairings and on the main tank. Followed by a smaller 2xX row of the same pattern. Below this, there are stretched 2x2 patterns which are quite high but not wider.

Is there any documentation why these patterns where chosen? Their number, size, position, etc. must be the result of some engineering process, not just coincidence. So why do these patterns look that way?

These patterns are used for tracking much more than just roll. According to this 2017 article from The Planetary Society, they

will be used by tracking cameras to precisely measure the vehicle's position during ascent.

"Engineering needs required the high contrast checkerboards for the boosters because these markings provide valuable vehicle performance data," wrote representatives from Orbital ATK, the company that manufactures the boosters, in an email interview.

Some of the patterns are viewed by cameras that are nearby, not miles away:

On the SLS boosters, the large vertical and horizontal checkerboard patterns (known as Style 4 and Style 5, respectively, if you were to look them up in an engineering manual) will be used by cameras mounted on the core stage to precisely measure how the boosters fall away from the vehicle after stage separation.

Smaller markers will be used by ground cameras to measure the rocket's liftoff clearance with respect to its mobile launch tower.

Not the answer you're looking for? Browse other questions tagged design sls or ask your own question.

12
Why is there so much variation in the number of engines on launchers?
8
What are these very large, square panels on Inmarsat 5?
7
Are black and white stripes any better than uniform gray for thermal control?
0
Bipropellant RCS systems: Do they go together with docking? Or with manned spaceflight?