How does Spinlaunch manage the counterweight right after launch?

Spinlaunch has successfully launched a suborbital test vehicle from a 1/3 scale demonstrator, see for instance aviationweek.com or space.com.

While spinning up the arm, perfect balance is achieved thanks to a counterweight opposite the payload. What puzzles me is, what happens right after launch, when the counterweight is still here and imparts a huge force on the axle?

A comment on this answer How might SpinLaunch actually spin something fast enough to launch it into orbit? suggests to release the counterweight at the same time, into a deep hole: "To avoid disbalance, two objects of equal mass should be launched simultaneously in opposite direction. One up into the sky and the other one down into a deep hole into the ground.". One answer of the same question notes that the amount of energy is on the order of 10³ kg of TNT.

However, looking at the images on their site, there is only one exit tube, to the sky. Even if the counterweight is closer to the center, it has a lot of kinetic energy and creates a lot of disbalance.

So, how do they avoid the counterweight destroying the axle through intense vibrations?

Spinlaunch releases the counterweight at the same time as the vehicle. Their patent says:

...The circular mass accelerator structure 150 may comprise a second exit port directly opposite the exit port 115 to capture the counterweight 135 that is released simultaneously with the launch vehicle 105 to minimize an imbalance on the motor at the time of release.

(To comprehend these excerpts as an engineer rather than a lawyer, for "may" read "will.")

The patent's figures do not show a second exit port, but one figure does show the released counterweight 135. Nothing is said about what happens to the counterweight after release or after reaching its exit port. 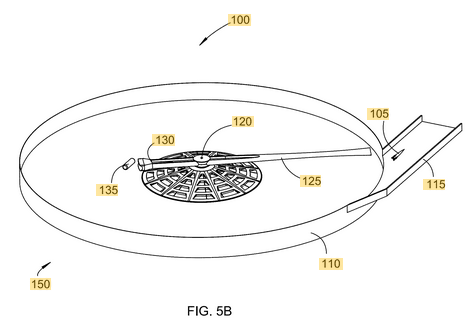 Following Christopher James Huff great comment, some heavy counterweight on a very short arm could roll inside a cage.

When spinning up the whole thing is balanced, the counterweight spins and rolls with no load nor friction against the cage.

When the payload is released, the counterweight keeps following its circular path inside the cage, yet it is suddenly loaded on the inner surface, and slows down due to friction* on this massive cage. The cage has to withstand this enormous force, still at least there is no impact nor sudden stop that's calculated in TNT units.

The connection between the shaft and the arm could be an elongated hole, allowing a small offset without damaging shaft bearings when payload is released.

*If not by friction, somehow, this system could allow to recover part of the energy used to accelerate the whole thing, while the releasing counterweight method makes the recuperation impossible.

Not the answer you're looking for? Browse other questions tagged launch physics design-alternative rotation or ask your own question.

9
How might SpinLaunch actually spin something fast enough to launch it into orbit?

11
How do they get up-close views of far away spacecraft after launch?
9
How does SpaceX manage parallel processing at the LC-40 Complex?
5
Vacuum launch, essentially free after system built
9
How might SpinLaunch actually spin something fast enough to launch it into orbit?
22
Does the Long March-11 increase its thrust after clearing the launch tower?
2
Does "Air Launch to Orbit" makes the best use of Earth's Rotation?
9
How much energy is lost by damping yaw from a SpinLaunch?