What is the maximum distance between two satellites orbiting at 400 km that would still allow them to communicate with each other using radio waves?

All satellites have the same inclination.

If, for example, you have only 2 satellites separated by half the distance (i.e. 21271 km), will they be able to communicate with each other? I guess not because Earth would be in the way.

If we have 3 satellites separated by a third of the distance (i.e, 14000 km), will they still be able to communicate with each other?

If the maximum distance is X, how many satellites are needed to cover the whole orbit? 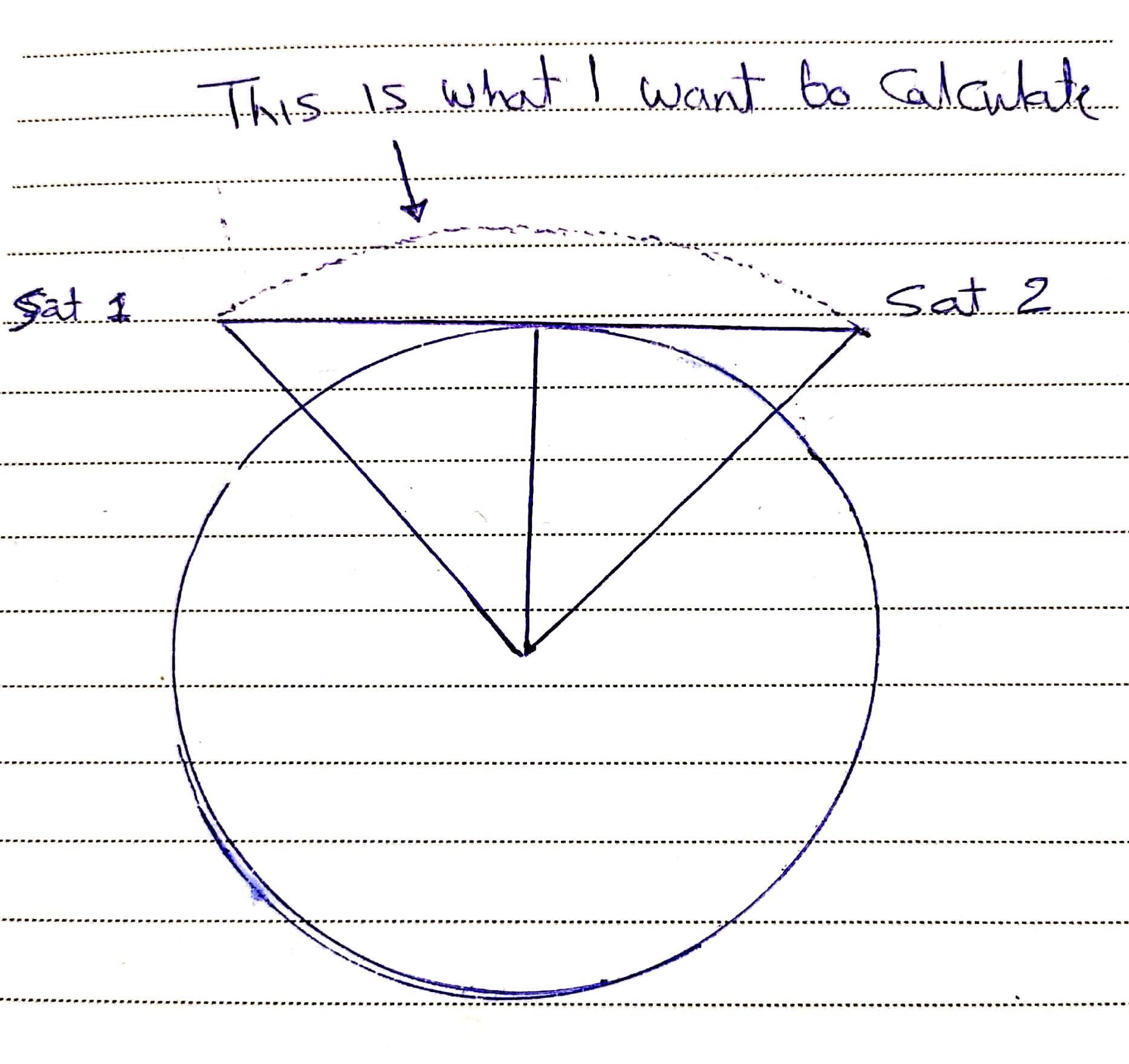 If, for example, you have only 2 satellites separated by half the distance (i.e., 21, 271 km), will they be able to communicate with each other? I guess not because Earth would be in the way.

Technically, like @Christopher James Huff said in his great answer, bouncing signals off the moon or using other relay satellites to send information to the other spacecraft would be possible, but direct communication would not be possible.

If we have 3 satellites separated by a third of the distance (i.e, 14000 km), will they still be able to communicate with each other?

No, see this from my recent answer to a similar question.

The absolute minimum number of satellites needed is 3, like I said in a comment, if the orbital distance is greater than or equal to the Earth's radius (at least 6371 km). However, if the orbital distance is less than 6371 km, you need more. For instance, if the radius is more than $6371(\sqrt2-1)\approx 2639$ km, then you will only need 4. Continuing, using the formula for the incircle and excircle of bicentric, regular polygons, where the incircle is the Earth and the excircle is the satellite network orbit, (see the Wikipedia article), the orbital radius is equal to $R=\frac{6371}{\cos{\frac{\pi}{n}}} - 6371$, where $n$ is the number of satellites in orbit. Then given some orbital distance, $R$, from the Earth (relative to the surface), the minimum number of satellites needed is $n=\bigg\lceil\frac{\pi}{\cos^{-1}\big(\frac{6371}{R+6371}\big)}\bigg\rceil$, where $\lceil x \rceil$ is the smallest integer greater than or equal to a number, $x$.

This implies that you cannot have three equidistant satellites orbiting as the Earth will still block signals.

If the maximum distance is X, how many satellites are needed to cover the whole orbit?

Just apply the formula in the above quote for 400 km and get $9.09$ (which rounds up to 10) satellites. If you don't want a perfectly symmetrical network, the minimum angular separation would be $\alpha = 39.5852^\circ$, corresponding to a distance separation of $4677.98$ km, which requires 9 satellites if you are willing to have a temporary loss of signal between the outlying satellite which is about 0.4 degrees behind its neighbors. If you want the network to be symmetrical around the Earth, you need 10 satellites, separated by 36 degrees and 4254.3 km.

Let's suppose the angular distance between the two satellites is $2\alpha$, measured from the centre of the Earth, and also that the midpoint of the straight line between them with length m would barely touch the surface.

Probably not quite what you're looking for, but two satellites on opposite sides of Earth, 13542 km apart, can still stay in almost-uninterrupted contact via EME communications (bouncing the signal off the moon).

This depends on the wavelength. While short waves spread more like a light, long waves bend over horizon and can cover distances in excess of 17,000 km even from the surface of the Earth. This is more than diameter of the Earth (12,742 km).

These waves require very long antennas but it may be easier to build them when where there is no weight.

Not the answer you're looking for? Browse other questions tagged orbital-mechanics iss artificial-satellite mathematics radio-communication or ask your own question.

10
At which point would two GSO/GEO satellites with similar orbital elements be closest to each other?
6
Could a (differently) inclined orbit remain above a Lunar pole half of every revolution?
5
How exactly are satellites drifted to slots in different orbital planes?
3
What are the prospects for comms with cubesats using "normal" internet connections?
3
How does the "eccentricity-inclination vector separation" technique work for colocated GEO satellites?
7
How deep could a gas giant communications network penetrate?