What is the purpose of the shrouds surrounding these rocket engines?

While researching the purpose of some rocket engine components, I came across several images of perforated shrouds surrounding the combustion chambers of rocket engines. I was highly curious about what purpose they serve, but was unable to find clear evidence.

The LR87-AJ-11, a late version of the LR-87, which was designed and build by Aerojet-General features such shrouds, for example, as seen here and here (all rights reserved to Jack Snell).

It should be noted that earlier variants of the LR-87 do not feature such a shroud as far as I am able to tell.

Another engine which would have featured such a shroud is the AJ-1200, which was an engine proposed for a pressure-fed space shuttle booster which was never built. The proposed schematics of the AJ-1200 can be found here, and the shroud can be spotted on pg. 5, 9 and 11.

The only thing these engines appear to have in common is that they were both designed (or updated) by the Aerojet-General Corp. in the late 60s or early 70s (1968 - 1972).

Perhaps someone of the designers from back then is aware of the function of the shrouds? Or does someone have a clue as to what it could be?

They are structural supports for the combustion chamber.

I didn't find a specific reference for those engines, but the Space Shuttle Main Engine (SSME) has a similar support, although it isn't perforated. On the SSME it's called the "throat ring". 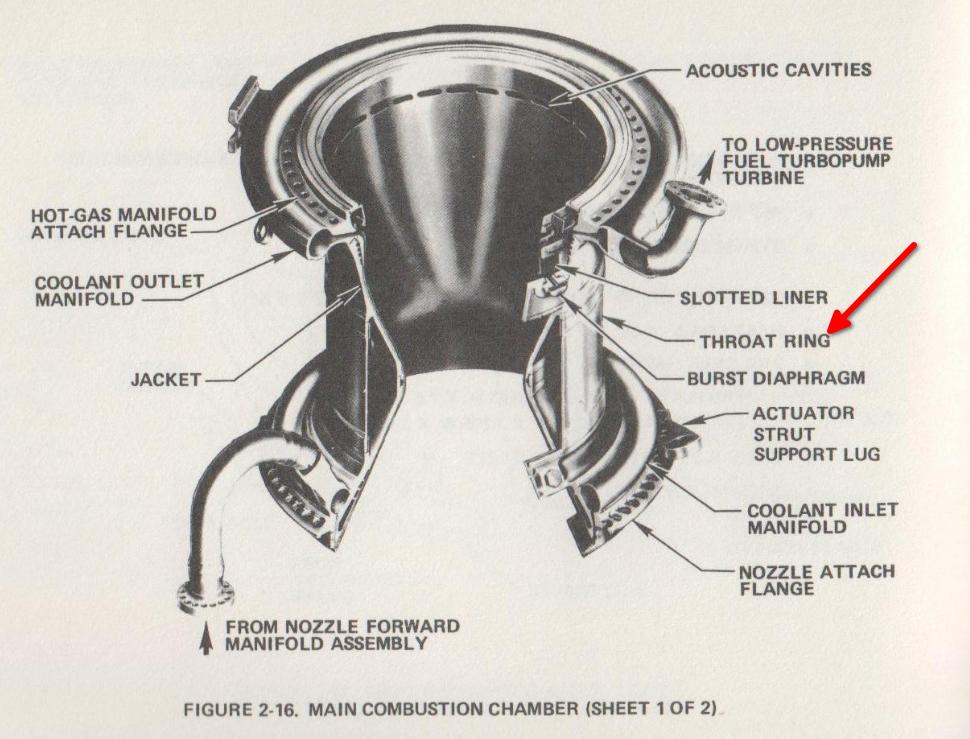 Presumably the cutout holes are for weight reduction, this is common in aerospace structures.

17
How exactly is the pressure inside the combustion chamber monitored?

11
Quality vs. Quantity for Rocket Engines
31
Why doesn't the US use European rocket engines?
33
Why are Rocket engines at the base of the rocket?
9
Limits of bypass ratio in air-augmented (ejector-jet/ducted) rocket
4
Is it possible to estimate the nozzle characteristics of the Rocketdyne HG3 engine?
5
What is the purpose of the "shaft" and "block" in these two different engine gimbal joints?
4
What is meant by chamber pressure in rocket engines?
3
What kind of methane-fueled rocket engines exist?
1
Whats the difference between cryogenic and cryo storable rocket engines
3
Can liquid rocket engines have the same thrust as solid rocket engines?