Moon Suit to be used for the Artemis III mission?

The Moon landing mission Artemis III is scheduled for launch in 2025. It will be the first Lunar crewed mission after Apollo.

What is the development state of the moon suit to be used for moonwalks during Artemis? Are prototypes under test in vacuum chambers with sun simulators?

It's not going well. There was a Government Accounting Office report issued on the project last year.

NASA’s current schedule is to produce the first two flight-ready xEMUs by November 2024, but the Agency faces significant challenges in meeting this goal. This schedule includes approximately a 20-month delay in delivery for the planned design, verification, and testing suit, two qualification suits, an ISS Demo suit, and two lunar flight suits. These delays—attributable to funding shortfalls, COVID-19 impacts, and technical challenges—have left no schedule margin for delivery of the two flight-ready xEMUs. Given the integration requirements, the suits would not be ready for flight until April 2025 at the earliest. Moreover, by the time two flight-ready xEMUs are available, NASA will have spent over a billion dollars on the development and assembly of its next-generation spacesuits.

Given these anticipated delays in spacesuit development, a lunar landing in late 2024 as NASA currently plans is not feasible. That said, NASA’s inability to complete development of xEMUs for a 2024 Moon landing is by no means the only factor impacting the viability of the Agency’s current return-to-the-Moon timetable. For example, our previous audit work identified significant delays in other major programs essential to a lunar landing, including the Space Launch System rocket and Orion capsule. Moreover, delays related to lunar lander development and the recently decided lander contract award bid protests will also preclude a 2024 landing.

NASA's Development of Next Generation Spacesuits

When this was written, less than a year ago, the complete suit (called the xEMU) had not progressed to any vacuum testing as shown in this graphic. A precursor version of its life support backpack (called the PLSS 2.0) had some runtime at vacuum, but not the final version (called the xPLSS). 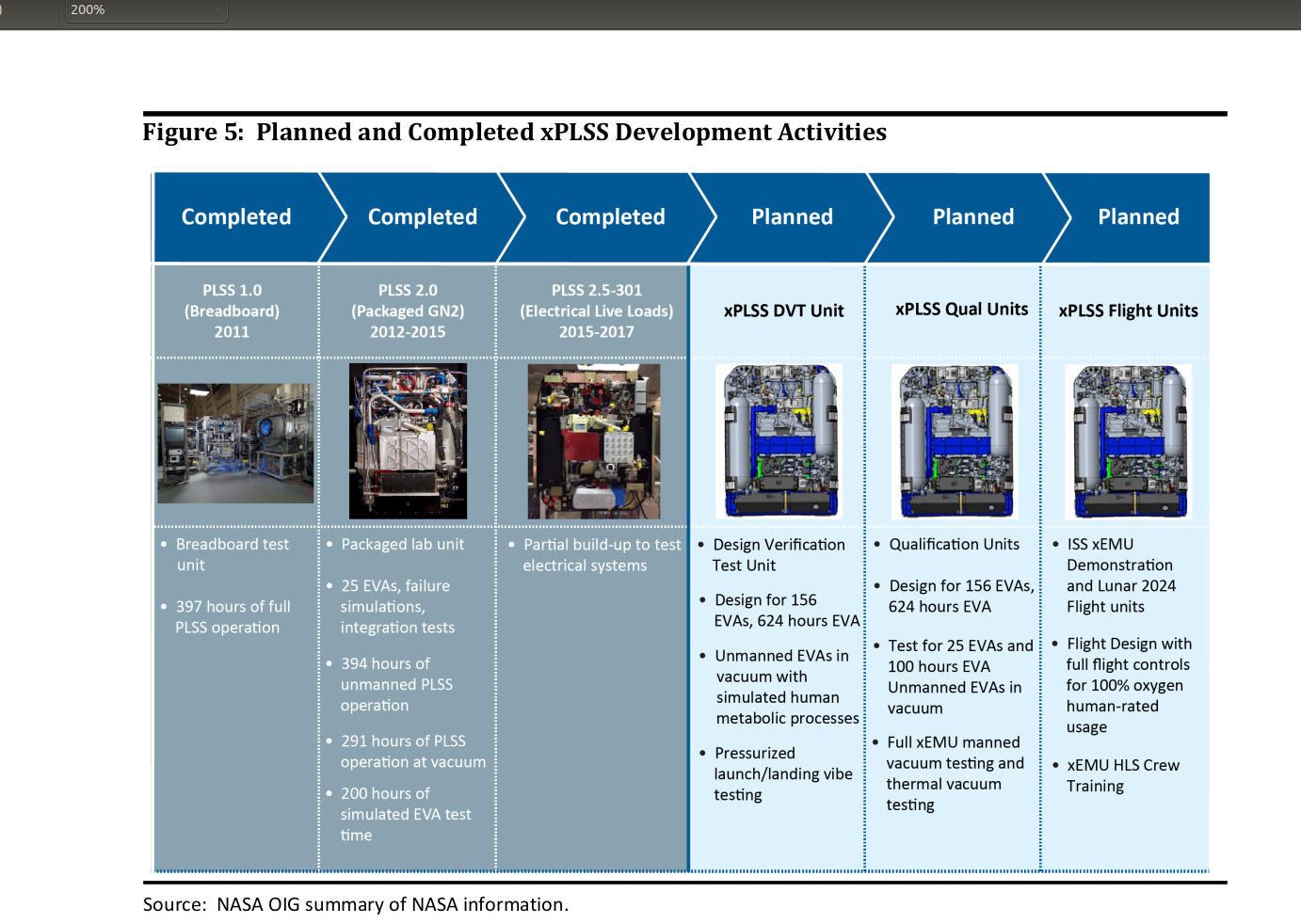 In an attempt to recover, NASA has decided to try and procure a commercially developed rather than in-house designed suit.

...after NASA finished developing the new spacesuit in-house, the Agency would contract with industry for system production. However, after 18 months NASA canceled the xEVAPS RFI and issued a new RFI in April 2021 for the Exploration Extravehicular Activity Services (xEVAS)—significantly altering its approach for future suit production.

This new contract is supposed to be awarded at the end of this month. Start making the popcorn.

8
Space Suit for Artemis, why two contracts instead of only one?

24
Why didn't the Apollo program do an uncrewed landing/ascent rehearsal?
40
If the Apollo mandate were delivered today, would the mission vehicle(s) and profile be similar?
31
Why weren't Saturn V and the Soviet N-1 Moon rockets made larger in order to simplify Lunar missions?
12
What colors were used in the Apollo Lunar Module interior, and why?
34
Was there a technical reason why Apollo 10 didn't land on the moon?
1
What is the connection (if any) between the new Artemis mission and the two Artemis spacecraft (Themis-B, -C)?
5
Single Engine versus Multiple Engines for Moon Landing
3
What is the cheapest possible way to land a crew of 2 on the moon?