Could there be caves on Mars in the areas inside Jezero crater and the watershed west and north of it where the Mg carbonates are detected? 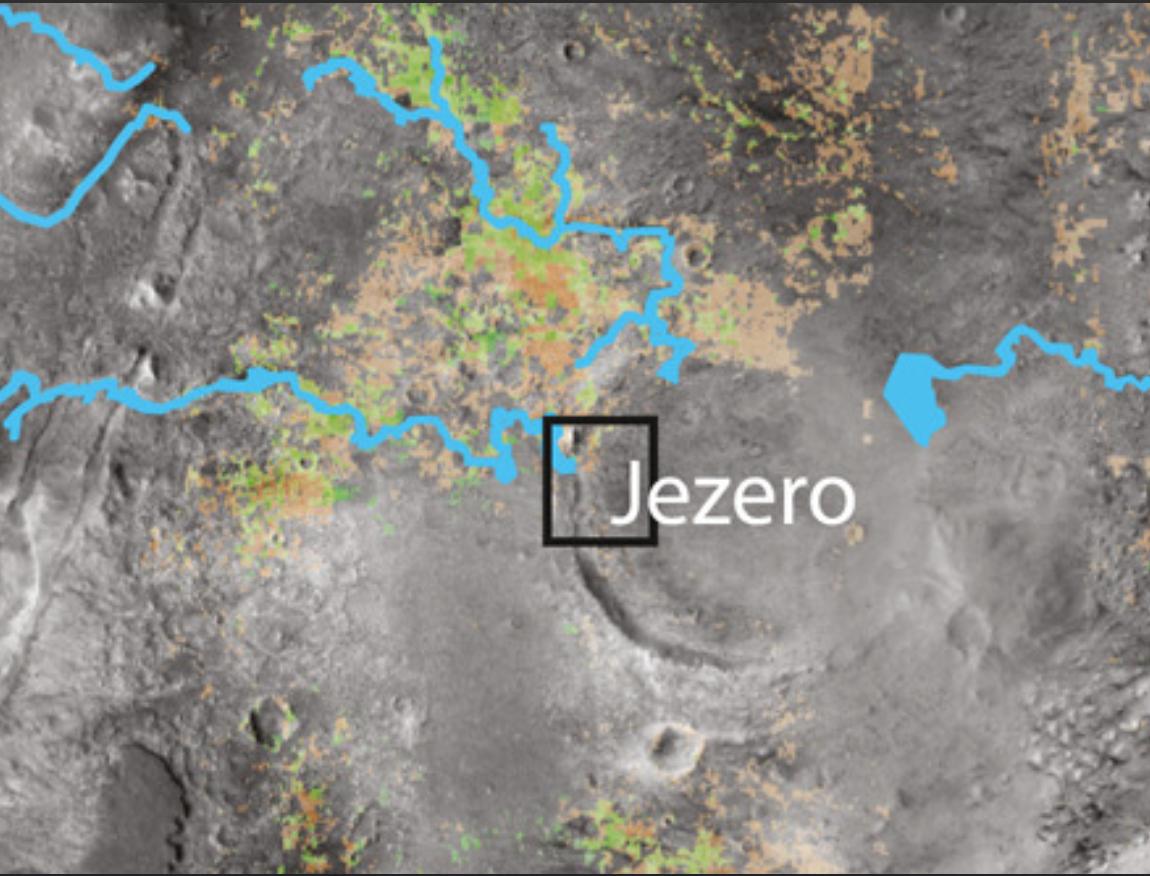 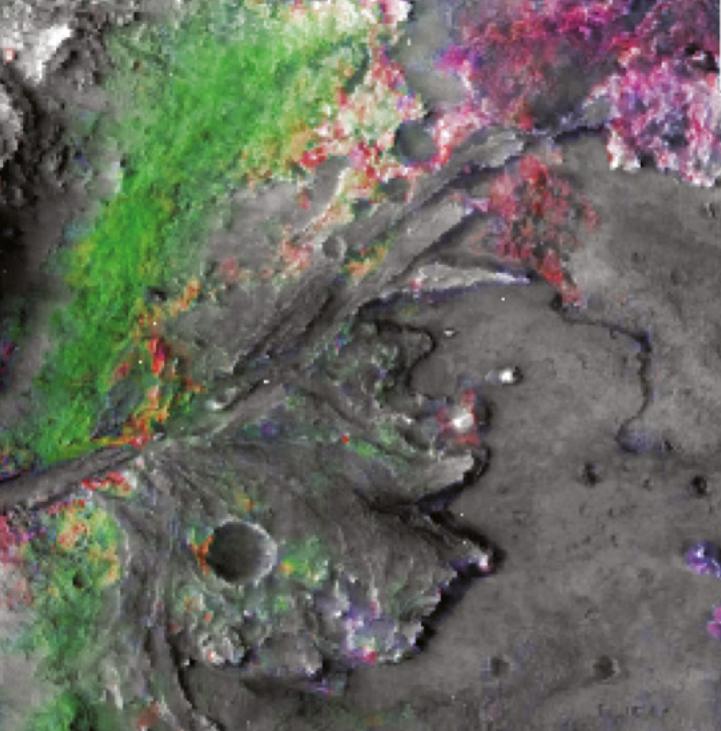 Both images above are screenshots from Fig. 1 of the article Formation of Magnesium Carbonates on Earth and Implications for Mars
The green coloured regions indicate where Mg carbonates were detected, the blue lines are the fluvial channels.
About 3.9 billion years ago, the watershed to the west and north of Jezero was the source for the lake that filled the crater.
Researchers from Brown University showed that the clay minerals in the fan deposits were formed in the watershed in an earlier period and some time later another surface water activity transported them into the lake.
Some other researchers have suggested that if the early Martian climate was cold, the chemical alteration on Mars could have been largely driven by water percolating in a warmer subsurface crust, followed some time later by pulses of water on the surface.
For Jezero crater those pulses, potentially sourced by either snowmelt or rainfall, would then have been largely responsible for the supply of the water and minerals from the watershed.
( This scenario is also supported by the authors of this article.)

Karsts on Earth are mostly formed from the dissolution of rocks such as limestone, dolomite, and gypsum, and are characterized by underground drainage systems with sinkholes and caves.

The article Carbon sequestration on Mars shows that about 20% carbonate is a likely maximum for Nili Fossae carbonate plains bedrock.( from a region located over 100 km north of Jezero crater)

The so-called "mottled terrain unit", described in this article, sections 4.1.2 and 4.2.4, is both present in the watershed and in the crater, has a spectral signature that is interpreted as representative of a mixture of olivine and Mg-rich carbonate, and is characterized by a mottled texture and a heavily degraded and exhumed appearence.

Doesn't that description of form and structure resemble that of a karst with sinkholes ?

I've been thinking about this question, on and off since it was posted.

Regarding your question of whether there might be caves in the magnesium carbonate regions of Jezero Crater on Mars my answer is, unlikely.

As the article you cite, and others, state there are five ways in which magnesite (magnesium carbonate, MgCO3) deposits can form:

(1) veins or (2) within the matrix of carbonated peridotite or, often through transport of fluids that have interacted with ultramafic rock, as authigenic precipitates, that is, (3) nodules in soil, and in (4) alkaline lakes and playas. A fifth occurrence (5) is within diagenetically or hydrothermally altered limestones and dolostones.

The article you site represents these pictorially. 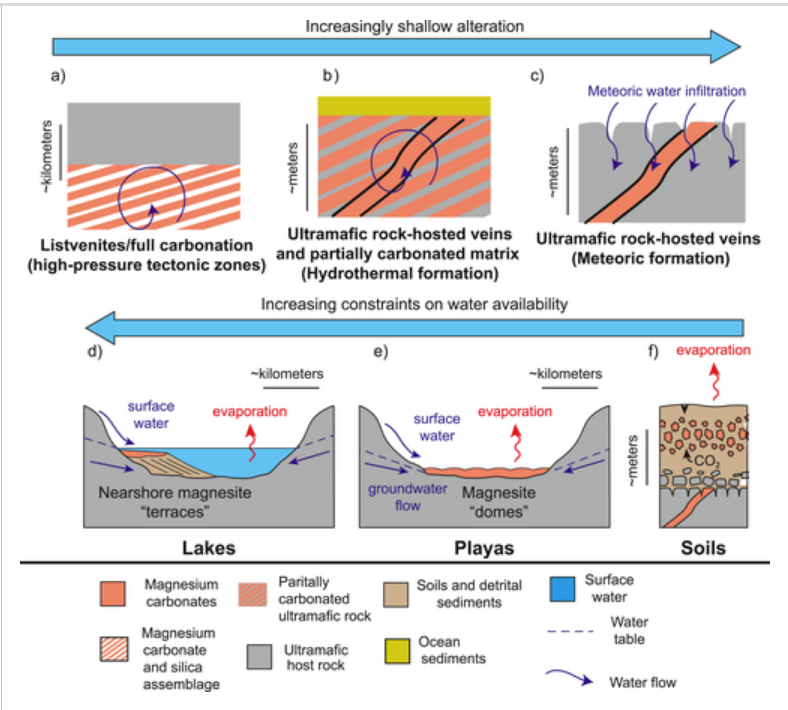 A simpler description of the formation modes are:

Going through these individually,

A vein-filling material is represented by picture (c). Such veins tend to be narrow and will not support the types of caves you are asking about.

Playa deposits, picture (e), occur in undrained desert basins. They are generally not thick enough for caves to develop.

Lacustrine or lake deposit, picture (d) is most likely what has been discovered at Jezero Crater, given it was once a lake. As with playa deposits, such deposits are generally not thick enough for caves to develop.

Magnesite nodules with soils, picture (f) is also a possibility for what has been found at Jezero Crater given such deposits are associated with lakes. Again, being nodules within a soil matrix, there won't be any caves.

Magnesite within the matrix of peridotite, picture (b). Peridotite is a crystalline mineral within ultramafic rock that was once molten (igneous). Peridotite is magnesium rich. Igneous rocks tend to be competent rocks, particularly, mafic and ultramafic ones. Basalt, which is mafic, under the right conditions can form lava tubes, which if the the roof collapses can form caves, but ultramafic lavas are not known for forming lava tubes. It's unlikely that caves will form in ultramafic rocks.

Replacement mineral in carbonate rocks. This is the replacement of some calcium within limestone (CaCO3) to create dolomite. This would happen to a deposit of limestone, which would be expansive and caves can form in such rocks. It's typical karst country. This would be unlikely at Jezero Crater because Jezero Crater is a lake environment (lacustrine) not a marine environment. Limestone deposits are typically composed of the shells of tiny marine creatures that have accumulated on the sea bed. This is not the case at Jezero Crater because of the environment of formation.

This YouTube video shows tiny caves in a Martian Rick taken by Perseverance. The cave openings are only millimeters across as the entire field of view is only 60 mm wide, so we can't go spelunking in them but microbes might. These micro-caves are a candidate for accessing biosignatures in samples brought back to Earth by future missions. Pictures and text below are taken from the video and its associated content, the latter citing NASA, JPL and CalTech. 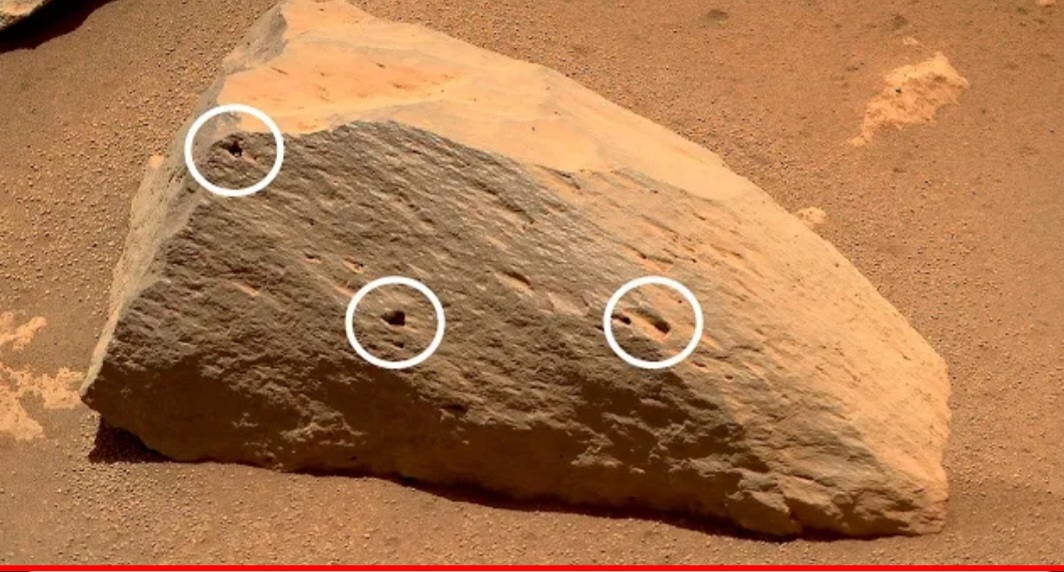 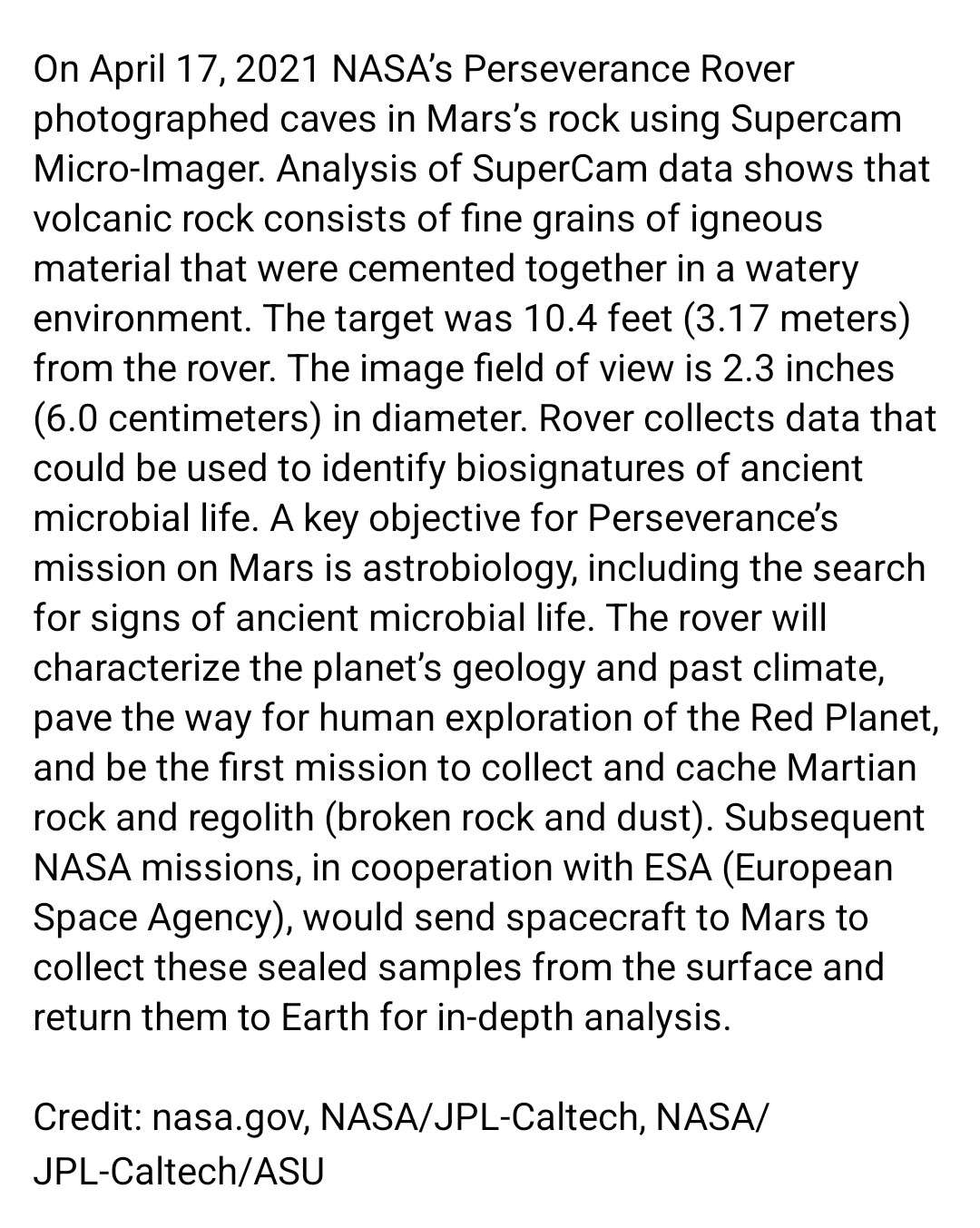 On the side: a little alkaline-earth chemistry

The video does not associate the micro-caves with any mineral chemistry, but known chemical properties suggest they may be associated with $\text{MgCO}_3$ (alternatively, there could have been sulfates such as gypsum, $\text{CaSO}_4•2\text{H}_2\text{O}$). Magnesium carbonate is more water-soluble than both $\text{CaCO}_3$ and common silicate minerals, especially if the water contains dissolved $\text{CO}_2$ (alkaline-earth carbonates are basic and react readily with aqueous $\text{CO}_2$). So water could have preferentially eroded $\text{MgCO}_3$- or gypsum-rich veins to produce the observed morphology.

Not the answer you're looking for? Browse other questions tagged mars planetary-science perseverance astrobiology geology or ask your own question.

10
Is there really a frozen lake near the equator on Mars?
9
Why is the northeastern region of Syrtis Major Planum a selected landing site for the Mars 2020 mission?
9
Where on Mars are there possible other collapse features with very high depth/diameter ratio?
2
What are the temperature and pressure inside the CO$_2$ deposit on Mars?
6
Are there still more images of caves on the surface of Mars that could be easily made accessible for humans?
1
When and where on Planet Mars are the Sun's rays the most blueshifted?
2
Would Ingenuity's cameras be capable to spot and/or make close-ups of possible biosignatures?
8
Are quasicrystals common on the Moon and Mars?
3
How large could manmade, domeshaped caves inside the ice dome in Korolev crater on Mars become without the danger of collapsing?