Could an upcoming comet lander be designed to cope with a greater variety of terrain types, compared to Philae? 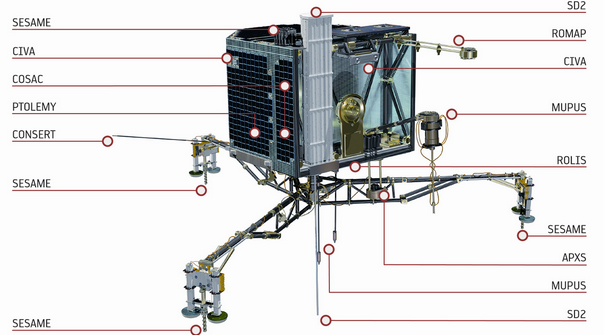 All I could think about while looking at the designs for Philae (besides how courageous and ambitious the mission was) was that Philae itself looks like it was designed for landing on a known surface. We know from the press hearings that they landing site and comet shape were not known before the mission, or better put one of the goals of the mission itself was determining this.

I guess this begs the question, why was Philae's design in shape and positioning format so determined that it can not adapt to a variety of surface scenarios?

My mind is full of ideas but especially two robots I once observed on YouTube inspire some design thought.

MorpHex - A robot that is omnidirectional

Cubli - A robot that can do delicate balancing movements

Remember that Philae was designed in the 1990's. MorphHex is at the edge of what technology of today can accomplish, it wasn't possible 20 years ago when Philae was designed. Most of all because adaptability would have to be done autonomously because of the 28 minutes time delay. The harpoons were supposed to fire once two legs had hit the ground. But it could've bounced off already when the first leg touched down. In retrospect that engineering detail is easy to criticize and a bit more AI reactivity on board could've helped. But then they would've sacrificed some of the instrument payload, and taking the chance but still not being able to drill, for example, is better than not even having a drill on board to begin with.

The next comet lander will be quite different because of technological developments, and the experiences from Philae, and new evolved science targets. Not because Philae was poorly designed in its time.

The next comet lander will definitely be better designed.

Before the Rosetta mission, our knowledge about comets was very limited. When Philae was designed, the engineering team had no idea what they would encounter. No probe ever got closer to the nucleus of a comet than a few 100 km (The Deep Impact craft crashed its impactor into comet Temple-1 after the launch of Rosetta), so any theories about the properties of the surface were just speculation.

The data from the Rosetta mission, especially those from Philae which were collected despite the problems, will likely tell us much about how the surface looks and thus allow the team to design a more reliable anchoring mechanism.

Additionally, Philae didn't work completely as designed. The probe had an upwards facing thruster which was supposed to press it against the comet during the anchoring. This thruster didn't work for some reason which still needs to be figured out. Now the engineering team needs to find out if that thruster would have made the landing successful and depending on the result either remove it from the next design or prevent it from malfunctioning.

You might have some ideas how a lander for unknown terrain could be designed, but keep in mind that space missions have some additional requirements for equipment which can make a lot of designs infeasible:

Philae is most certainly designed to land on an unknown surface. It is not designed to be mobile on such surfaces, like the robots in the OP's video are.

Note that Philae has three legs and an extremely low center of gravity. It's tipping angle is probably above 45 degrees, and certainly far above 30 degrees. Three legs is the most stable and self-adapting configuration known. This is important for several reasons, most of which are related to power and reliability. Having three long legs means that active adaptation is not necessary, saving the weight and complexity of actuators and feedback mechanisms such as sensors and computers. In addition to needing power, such systems may be susceptible to failure. Even the simple nitrogen purge thruster (i.e. cold gas thruster) failed, and that was little more than a needle and a diaphragm.

Not the answer you're looking for? Browse other questions tagged rosetta design philae or ask your own question.