Two questions on this site concern themselves with the depth to diameter ratios of craters:

From what I've seen, research undertaken in the area has only measure the diameter of the top of the crater and the depth of the crater.

Has any research been done that also measured the diameter/width of the base of craters in addition to the other two parameters for craters?

By knowing both the crest and base diameters of craters and their depths, it is possible to determine the overall slope angle of the walls of craters. This could provide useful information regarding angles of repose and ground stability for settlements or mining operations on the Moon, Mars or elsewhere.

As one might expect, detailing the key geometric features of craters, including the slope angle of the walls, involves more than a few additional dimensional measurements. In real craters the walls are not in general straight, conical surfaces; the floor may not be at one level and may be difficult to distinguish from the "walls" whose slope varies more or less continuously; and the crater as a whole need not be symmetrical. In such a situation, a detailed topographic map, known technically as a digital terrain model (DTM) is necessary to capture all the key features.

Arizona State University's School of Earth and Space Exploration](http://lroc.sese.asu.edu/posts/864) reports DTM results from the Lunar Reconnaisance Orbiter Camera (LROC) on two lunar craters, Tycho and Linné. The complexities noted above are indicated by the differences between the two crater profiles from each other and from any imagined ideal conical shape (image from the above-mentioned link): 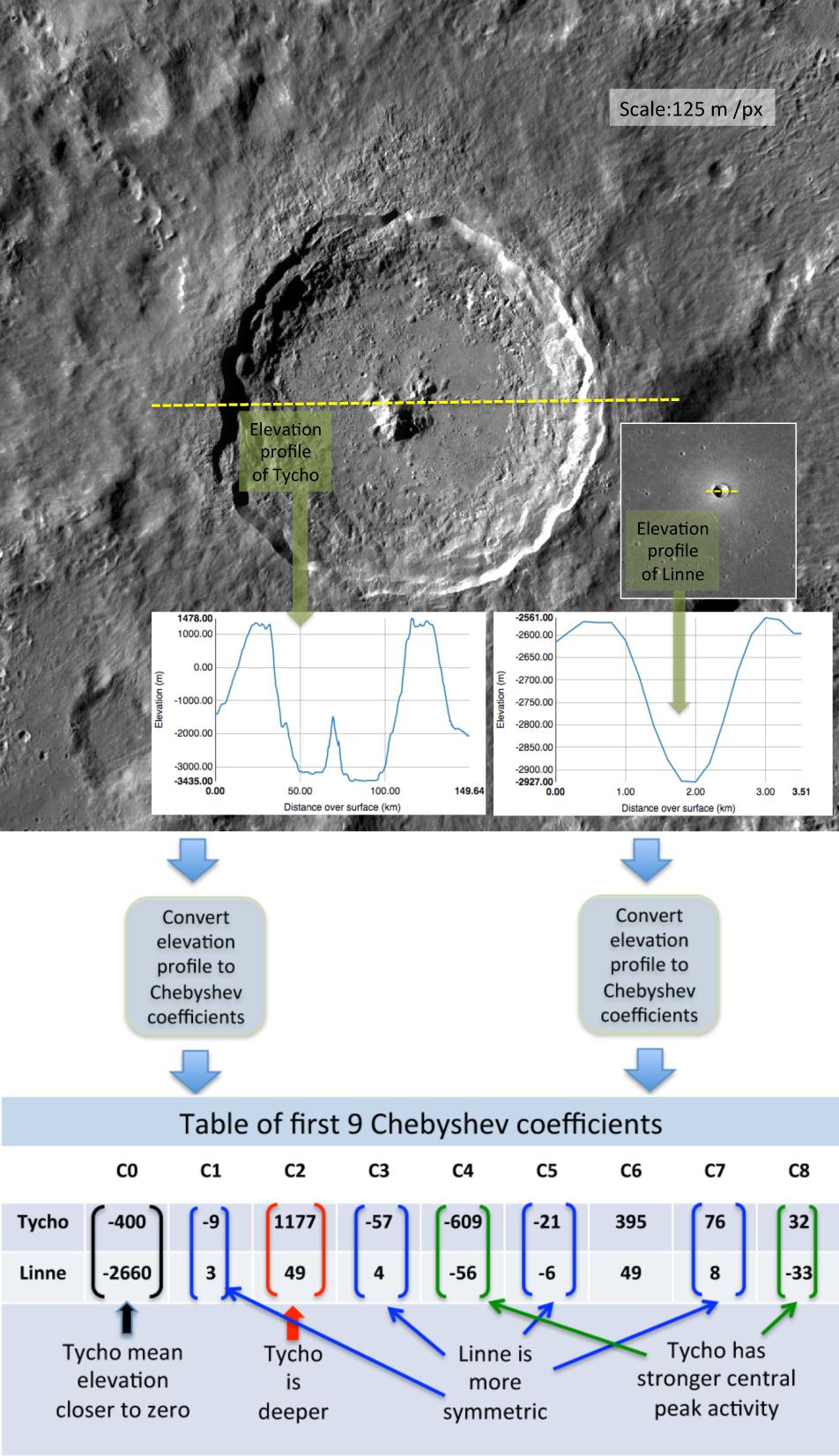 The profile may be quantified by fitting the DTM data to a combination of Chebyshev polynomials of the first kind gives at $T_0(u)=1,T_1(u)=u$, etc. For each degree $k\ge1$ the polynomial $T_k(u)$ may be defined as the unique polynomial having the value $+1$ at $u=1$, $(-1)^k$ at $u=-1$, and $k-1$ critical points between these boundaries where that maximal or minimal value of $\pm1$ is also obtained.

The profile for Tycho, Linné, or any other crater wheresimilar data are available may then be fitted to a function

where $R$ is the crater radius, $x=0$ is the center, and $c_k$ are the fitted coefficients. A relatively large value of $n$ (n=8$ in the reference) is used in the reported data because, as we will see, this is necessary toget an accurate geometrical estimate.

The fact that all the polynomials wuth degree $1$ or geater range exactly from $-1$ to $+1$ within the crater bounds facilitates characterizing the depth of the crater in terms of the coefficients. For a single Chebyshev polynomial term the depth as measured from maximum to minimum height is given by $2|c_k|$. With multiple terms these contributions do not add up exactly because the maxima and minimal of each polynomial occur at different coordinates, but we aways have a Triangle Inequality-like relation:

where $D$ is the difference between maximum and minimum heights.

The slopes at the walls are also readily determined because each of the polynomials has a slope of $\pm k^2$ at the boundaries. Thus for the left boundary $x=-R$ and the right boundary $x=+R$ respectively we have the slope formulae:

The angle is then, of course, the Inverse tangent of the slope.

In general, we expect the $|c_k|$ to have larger absolute values for even $k$ than for odd $k$, as craters are not exactly symmetrical but are fairly close to being so. In addition, for either parity the higher degree coefficients tend to be smaller in absolute value than the lower-degree ones, at least if we include enough terms. Therefore, as indicated in the referenced link, the depth if the crater is determined primarily by $c_2$, but higher degree terms with the factor of $k^2$ in the slope formula may have more impact on the wall angle calculation. Higher degree terms, especially those of even degree, also emerge as major contributions to the central peak in craters such as Tycho.

9
Where on Mars are there possible other collapse features with very high depth/diameter ratio?
5
Catalog of lunar crater depths and diameters

10
Is the water ice in craters near the moon's poles likely to be accompanied by other volatiles?
3
Moon craters. How deep do they get?
3
What is the real depth of the Mojave crater on Mars?
13
Are there microclimates with better weather conditions on Mars?
9
Where on Mars are there possible other collapse features with very high depth/diameter ratio?
35
Why are there mountains/mounds in the centre of craters on the lunar surface?
0
Where are the meteorite remnants related to the craters they've produced on the moon?