Somewhere I read the shuttle fuel tank kept structural integrity only thanks to internal pressure of the fuel, a'la inflated balloon; empty it would collapse under own weight; and the walls were quite thin, a BB pellet could easily thwart a mission punching a hole. How much truth is to that?

A perfect answer would provide a full crossection of the wall, air on one side, liquid hydrogen on the other, materials and distances in between. But a good summary on 'material design' of the shuttle - materials used, their estimated thickness, will suffice.

You might be confusing it with the balloon tanks used by the original Atlas and the Centaur upper stage. The Shuttle external tank was not a balloon tank - it did not need to be pressurized to be structurally stable under its own weight - but the pressurization did contribute to its ability to withstand flight loads, as is the case for almost all liquid-propellant rocket tanks. The mechanism for this strength-enhancement is that the pressure provides a local restoring force for small deformations in the skin, resisting the effect of buckling.

The Super Light-Weight Tank (SLWT) used in the majority of Shuttle missions has a fairly simple basic structure. In the barrel sections, the innermost layer is approx 0.1" thickness of Al-Li alloy. The thickness varies along the length of the tank due to varying hydrostatic loads. Outside this there is a thin (<0.02") layer of epoxy primer, then approx 0.5" of mysterious grey substance and then ~2" of orange foam insulation. 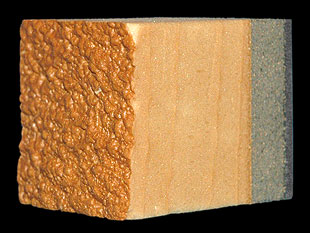 Due to the discussion around this question, I've done some more digging to find out whether or not the epoxy layer shown in pericynthion's answer can be considered a structural part of the tank.

In many NASA documents, the epoxy layer isn't mentioned:

NASA applied two basic types of Thermal Protection System materials to the ET. One type was a low-density, rigid, closed-cell foam. This foam was sprayed on the majority of the tank’s “acreage”—larger areas such as the liquid hydrogen and liquid oxygen tanks as well as the intertank—also referred to as the tank “sidewalls.”
The other major component was a composite ablator material (a heat shield material designed to burn away) made of silicone resins and cork.

There are two basic Thermal Protection Systems on the External Tank: One is low-density, closed-cell foam; the other is a denser composite material called ablator, made of silicone resins and cork. An ablator is a material that dissipates heat by eroding.
The closed-cell foam used on the tank acreage is a Spray-On- Foam-Insulation often referred to by its acronym as SOFI (pro- nounced sō-FEE). The composite material is Super Lightweight Ablator, known as SLA (pronounced slaw).
The External Tank uses ablators on areas that are subjected to extreme heat, such as the aft dome near the engine exhaust and on protuberances that are exposed to aerodynamic heating, such as the cable trays.

I have found references that mention an epoxy primer.

The application of the (epoxy) primer, used largely as an adhesive for foam insulation,...

It seems unlikely to me that you'd need a layer of primer that's 12 mm thick, but I'm no expert in this area. 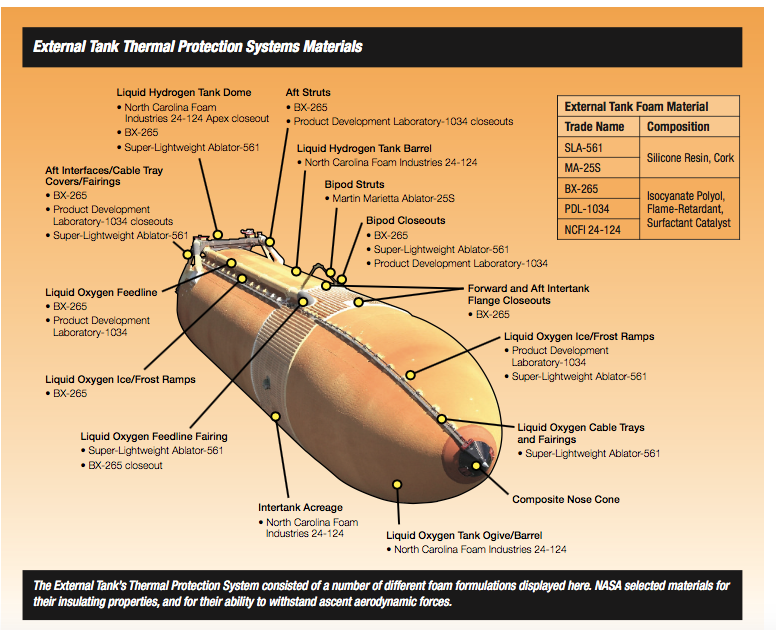 which lists a resin/cork combination as the ablator, used in high heating areas. From the graphic this ablator appears to be used instead of SOFI foam, not underneath it.
The resin/cork material was applied in sheets. This material caused some problems before the first launch, with panels coming off the tank as it contracted when it was filled with cryogenics.

Provisionally, I'd have to conclude that the epoxy layer is not a structural part of the tank.

Not the answer you're looking for? Browse other questions tagged space-shuttle construction liquid-fuel or ask your own question.

20
Why not build rockets out of composite materials?
18
Which parts of a spacecraft are joined by adhesives?
7
What's the thickness and weight of rocket tanks?
5
What was the primary role of epoxy layer between metal structure and insulation foam on External Tank of Space Shuttle?
1
Are rocket boosters insulated?

5
Why wasn't the space shuttle fully Liquid fueled?
4
Platinum Colloid in Liquid Hydrogen fuel to increase fuel efficiency
22
How was fuel crossfeed achieved, between the main tank and the Shuttle?
3
Space Shuttle fuel
14
How do rockets keep their fuel in a liquid state?
4
Could Dick Scobee have flown a RTLS on Challenger 51L
8
Impact of tidal forces to a liquid in a half-full tank
4
How much fuel/oxidizer was held in the piping of the Shuttle orbiter?
5
What was the primary role of epoxy layer between metal structure and insulation foam on External Tank of Space Shuttle?
5
Why did the Space Shuttle dump excess fuel from the external tank?