Would a 'space elevator'/sling on a rotating asteroid work?

It is possible to find numerous studies of space elevators, for Earth, Luna, Mars and even Phobos. But would a 'space elevator' work on an asteroid? I use scare quotes because typically the point of a space elevator is to escape from the gravity well of the planet, but in this case the second function of a space elevator is relevant - the ability to launch (or catch) objects at high velocities, acting as a momentum exchanger between the planet and spaceships.

The concept is simple enough, find a rapidly rotating asteroid, one which rotates in hours or minutes would be ideal, it doesn't matter too much how big it is as long as it's not so large that it has significant gravity. It also doesn't matter how small it is, as long as it's big enough to make the venture worthwhile.

A cable is anchored to the asteroid (ideally to a solid iron core) and a counterweight is flung or launched off into space, so that the rotation of the asteroid causes the cable to maintain it's extension.

The cable could then be extended further, until it reaches off as far into space as is desirable. Crawlers would bring objects up the cable and release them from the top. If the cable is long enough then the objects could be released with sufficient velocity to reach Earth.

If this scheme worked, then packets of material mined from the asteroid could be launched without the use of rocket fuel, requiring only the electricity for climbing the cable (which would not be great, as there is no real gravity to climb against - in fact mainly it would be braking which would be required as the cable would try to fling the crawlers off prematurely). Essentially the cable would transfer angular momentum from the asteroid to packet launches. The asteroid would slow down over time, but the cable could be extended to maintain launch velocities.

Furthermore, higher up the cable there would be increasing apparent gravity due to centripetal force, this would permit the construction of a station with comfortable gravity for human habitation. The cable could then also be used to catch incoming spaceships.

Are there problems with space elevator physics that would make the system hopelessly unstable in the absence of gravity? If it did work, how would the construction difficulty/cost compare with a space elevator on Luna or Mars?

Shallow gravity wells with a healthy angular velocity are much more amenable to space elevators. The elevators can be be much shorter. The stress is much less so the tether could be an ordinary material like Kevlar.

P. K. Aravind outlined the equations for an elevator's length and taper ratio: The physics of the space elevator.

I attempted to incorporate his equations into a spreadsheet. Plugging in body radius, mass and angular velocity for various bodies I got these numbers: 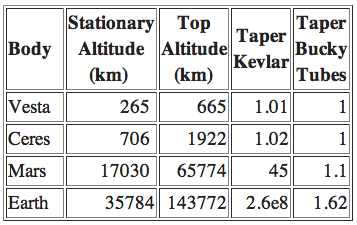 Stationary altitude is the distance above body surface at which a circular orbit would have the same angular velocity as the body.

Top altitude is the tether length needed to hold the tether taut and vertical. To balance the length below synchronous orbit, a length above is needed. If a counterweight is employed, it doesn't need to be this tall.

As you can see Vesta and Ceres have lengths and taper ratios far less challenging than Mars or Earth elevators.

If we ever make it to the main belt, I believe Ceres will be an important resource body. There is some reason to believe it has lots of water beneath it's surface. Hopefully we will know more about Ceres when Dawn arrives there April, 2015.

As you say, an elevator can fling payloads and thus provide velocity for injection to a transfer orbit. The ~2000 km Ceres elevator mentioned above could only provide ~.5 km/s. Possibly enough to reach neighboring asteroids but not enough to fling a payload earthward. A Ceres elevator 26,000 kilometers tall could provide about 5 km/s, enough for Trans Earth Injection.

There are other advantages as well.

For larger asteroids, surface gravity precludes ion engines. While ion engines have great ISP, they have very meager thrust. Even on bodies like Ceres or Vesta, a spacecraft's weight would exceed the tiny thrust of an ion engine. When thrust to weight ratio is less than one, a spacecraft can't get off the ground. However an ion engine could dock with an asteroid elevator.

I have more info on space elevators at my blog post: Beanstalks, Elevators, Clarke Towers

There is a big problem with the proposal as-stated in the OP, and I don't believe anyone else has sufficiently hit this point. I'm quoting, with emphasis my own here:

If this scheme worked, then packets of material mined from the asteroid could be launched without the use of rocket fuel, requiring only the electricity for climbing the cable (which would not be great, as there is no real gravity to climb against - in fact mainly it would be braking which would be required as the cable would try to fling the crawlers off prematurely). Essentially the cable would transfer angular momentum from the asteroid to packet launches.

A cable is not a rigid member. It has tensile strength but it can bend. It can often be coiled. Cables are structurally very useful, but they only have one specific role to play. In this case, the proposal is attempting to over-use cables.

I looked at such a scheme a while ago, and here is a really brief mockup of what we're looking at: 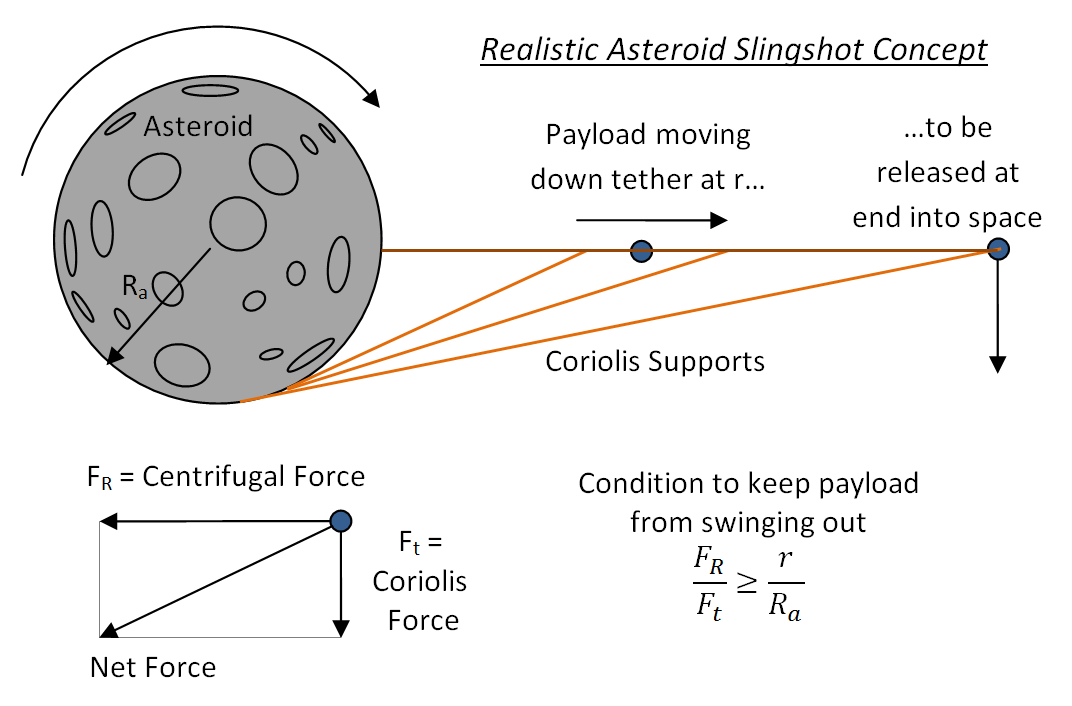 You'll note that the darker line along which the payload moves corresponds to the conventional notion of a space elevator. Others have already pointed out that the gravity will be overcome very easily. However, the "swing" in the tether is not so easy to deal with.

An Earth space elevator would be aligned directly with Earth's center when there is no payloads traveling up or down. Start moving lots of material into space (after all, that's the point) and the tether will be dragged along the direction of Earth's rotation. The tether will then be off-center. You can entertain this concept for an asteroid by either drawing the main elevator off-center, or add additional cables as I have done for the "Coriolis Supports" above. I like the above scheme because the system will reliably not swing and move about. Mathematically it doesn't matter.

You easily find that the time to climb the tether is constrained by the radius of the asteroid. Also the rate of rotation. This follows directly from the simple triangle in the diagram.

Where would we find such a slingshot useful? Well, Eros is one of the largest asteroids in the inner solar system. Very few large asteroids have a semimajor axis within Martian territory and Eros is a bit of an exception to the rule. The minimum useful requirement we might expect from it is a Hohmann transfer to/from Earth orbit. I did the calculations before, but you could easily put them together yourself if you want. Even being maximally generous, the time to climb the tether is on the order of months. Since these transfers should only take something like 8 months in the first place this is a huge logistical problem!

What about larger asteroids? For Ceres, Vesta, etc. it could absolutely work. You might have very few constraints on the limit of climbing rate. For these few giants it might be practical to toss things around the asteroid belt. 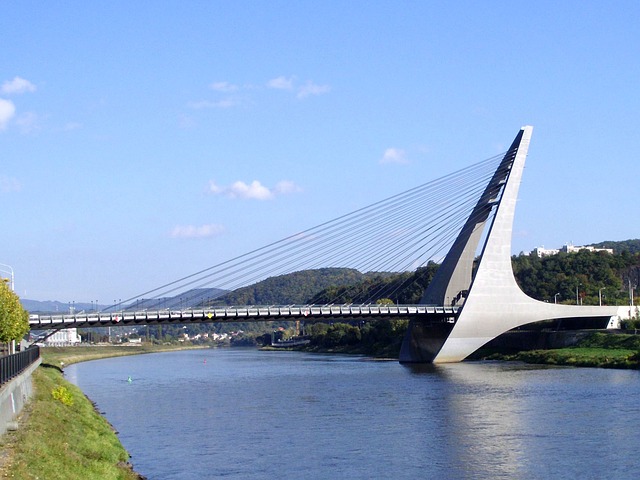 Here, we're adding additional members which are not cables. For an asteroid sling shot these would need to be fully rigid, or it would need to combine compressive strength with enough mass that it's weight on the asteroid is enough to hold it in place. Kind of like that suspension bridge on Earth. By doing this, you're increasing the radius at which you are pulling the climbing payload, which is one way of increasing the torque (force x radius).

However, once you've added all these elements, you have almost everything you need for a space trebuchet anyway. It is true that a powered sling would need its own power source (unlike using the asteroid's spin), but doing this would massively reduce the total mass of the structure. For this reason, I think that using the rotation of asteroids for transport is unlikely except for a few very select cases.

What you are describing is not a space elevator, the point of one of those is to get to an orbit where there is a significant gravity well. Your idea is more of an angular momentum sling. It's not a bad idea, however there are considerations:

A space elevator can't be built without gravity--for the system to be stable you must have more tension on the cable than the greatest force exerted by all climbers on the cable at any one instant.

While the weight of the climbers is not a realistic problem inertia is another matter if you have a cable on something that's really small--you could end up pulling the cable down a bit as your mass accelerated.

In practice there's no reason for an elevator per se on really small objects--you can just throw stuff off anyway. The only reason one would be built is as a sling--if the object has enough rotation a long enough cable would be turning pretty fast at the outer end

It's a realistic sci-fi. Something that technically could be done but is unlikely to be done.

The primary problem is a split between economy and safety:

So, these two are the the big roadblocks that make it unlikely.

Now for various obstacles along the way...

Not the answer you're looking for? Browse other questions tagged asteroid mining space-elevator or ask your own question.