Could any of the JWST instruments image the rings around 10199 Chariklo?

The asteroid 10199 Chariklo orbits between Saturn and Uranus. It has two rings with radii 386 and 400 km and widths of about 6.9 km and 0.12 km respectively. It is currently 15.94 AU from Earth. Do any of the instruments on the JWST have the ability to produce an image of the rings of Chariklo?

I don't have an "Astronomer's license" but I'll throw an envelope-back at it and see what sticks.

Wikipedia's 10199 Chariklo; Rings links to F. Braga-Ribas et al. 2014 A ring system detected around the Centaur (10199) Chariklo which shows a very nice, clean, and symmetric pair of dips before and after the main occultation and presents an extensive analysis. These are consistent with (per Table 1.) a pair of rings at radii of 390.6±3.3 and 404.8±3.3 km with a separation of 14.2±0.2 km and a clear gap between the two rings 8.7±0.4 km wide. These are model-derived results based on fits to the data.

The caption of Table 1. begins:

Table 1 Ring physical parameters. The geocentric distance of Chariklo’s system at the moment of the occultation, D = 2.031×109 km, provides a scale of 9846 km per arcsecond in the plane of the sky

With a period of about 63 years and a modest eccentricity of 0.17 we can use that distance and scale for our envelope backing estimate.

We can estimate the resolution of the JWST with the Rayleigh criterion 1.22 λ/D, choose the shortest, mid, and longest wavelengths and an average diameter of 6.5 meters and get the following results:

but note that JWST has an aperture masking instrument NIRISS:

and according to Wikipedia's JWST; scientific results :

NIRISS aperture masking interferometry (AMI): A clear detection of the very low-mass companion star AB Doradus C, which had a separation of only 0.3 arcseconds to the primary. This observation was the first demonstration of AMI in space.

it's starting to produce results. You can read more about aperture mask interferometry in Astronomy SE:

which means JWST will eventually be able to resolve pairs/multiple objects in Near IR to much better than Rayleigh.

But why not just observe at 0.6 um where resolution is best and ignore NIR and Thermal IR?

I've run out of steam and coffee at the moment, so I won't proceed further to do the brightness calculation, but these distant asteroids (and dust) often have low visible light reflectivity, which means they're dark, absorb sunlight and re-radiate it as thermal IR.

Most hunts for asteroids that might hit Earth some day use thermal IR rather than visible light both because there's fewer background objects of similar brightness (stars put most of their energy in very near IR to visible to near UV) and because they can leverage the full power of the Sun which heats them.

With an apparent magnitude (visible, not thermal) of about +18 I can venture a guess that the rings will be relatively straightforward to resolve at some wavelength using some instrument but I can't say yet what the optimum configuration will be.

I think a follow-up question in Astronomy SE where there's a higher of folks having "Astronomer's licenses" can shed more light on that. 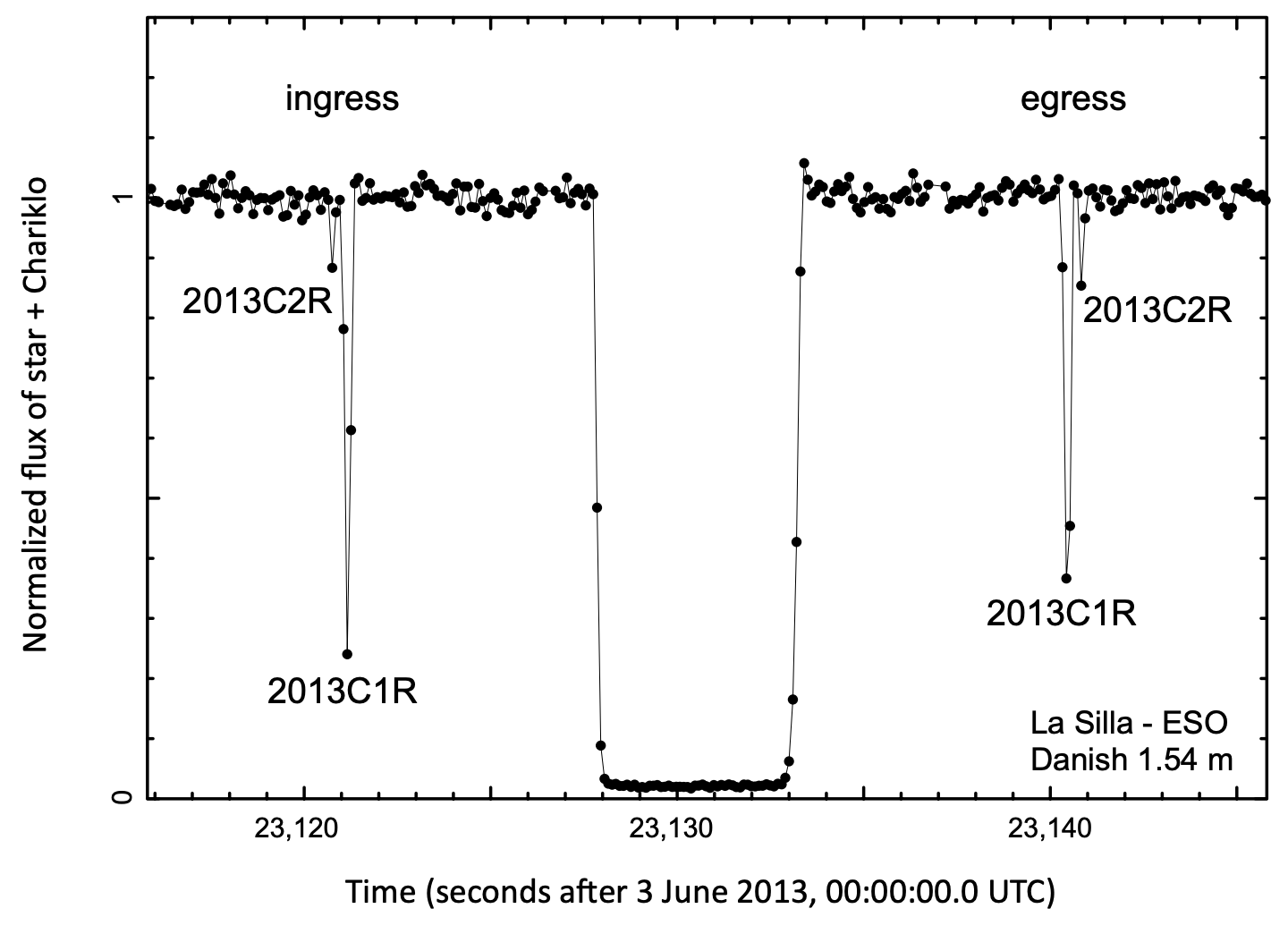 Figure 1 Light curve of the occultation by Chariklo system. The data were taken with the Danish 1.54 m telescope (La Silla) on 3 June 2013, at a rate of almost 10 Hz in a long-pass filter and cut-off below 650 nm, limited in the red by the sensitivity of the CCD chip, see SI for more details. Aperture photometry provided the flux from the target star and a fainter nearby reference star. Low-frequency sky-transparency variations were removed by dividing the target flux by an optimal running average of 87 data points (8.7 s) of the reference star, resulting in a final SNR of 64 per data point. The sum of the star and Chariklo fluxes has been normalized to unity outside the occultation. The central drop is caused by Chariklo, and two secondary events 2013C1R and 2013C2R are observed at ingress (before the main Chariklo occultation) and egress (after the main occultation). A more detailed view of these ring events is shown in Fig. 3 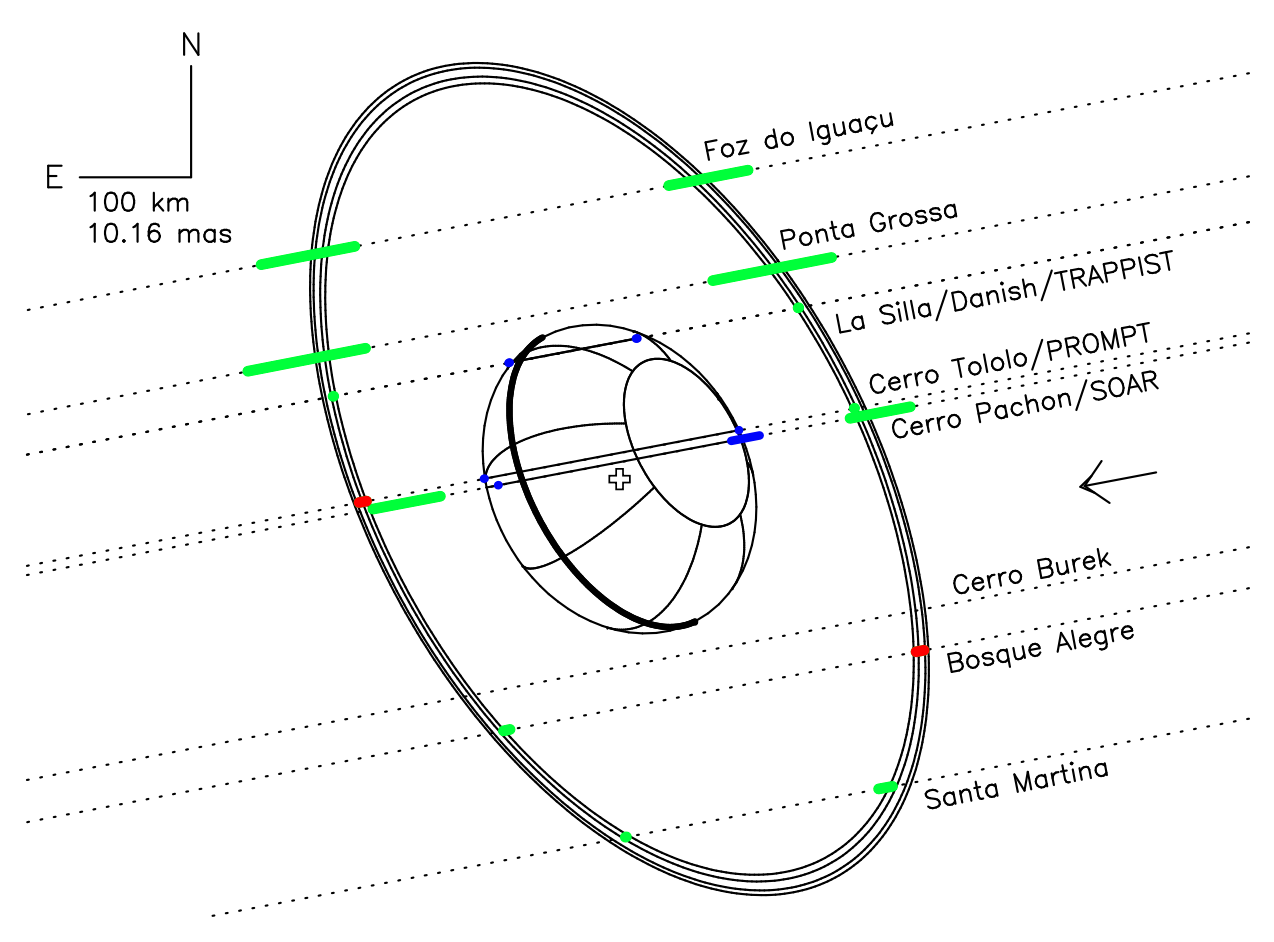 Figure 2 Chariklo ring system. The dotted lines are the trajectories of the star relative to Chariklo in the plane of the sky, as observed from eight sites (see the SI for details), the arrow indicating the direction of motion. The green segments represent the locations of ring C1R observed at each station (at 1σ-level uncertainty). For clarity, we have not plotted the detections made at the TRAPPIST and 0.275 m telescopes (at La Silla and Bosque Alegre, respectively) as they have larger error bars than their local counterparts, and would supersede the corresponding green segments. Two ring events occurred during camera readout times (red segments), at Bosque Alegre and Cerro Tololo, and also provide constraints on the ring orbit. The ring events are only marginally detected at Cerro Burek, but the signal-to-noise ratio is not sufficient to bring further constraints on the ring orbit and equivalent width. An elliptical fit to the green and red segments (excluding the SOAR events at Cerro Pach´on due to timing problems, see the SI) provides the centre of the rings (see open cross), as well as their sizes, opening angle and orientation, see Table 1. Chariklo’s limb has been fitted to the two chords extremities (blue segments) obtained at La Silla and Cerro Tololo, assuming that the centres of Chariklo and the rings coincide as well as their position angles. This assumption is expected if Chariklo is a spheroid, with a circular ring orbiting in the equatorial plane, see text and the SI

Not the answer you're looking for? Browse other questions tagged asteroid james-webb-telescope rings or ask your own question.

12
Why are the Rings of Saturn so much brighter than the other planets?
3
Valuable materials in Saturn rings and comets vs. C-type asteroids
11
How much of the sky can the JWST see?
2
Could ejecta from asteroid Bennu enter into temporary orbit around it? If so, how?
2
How Much Could You Deflect the Path of a 500 meter Diameter Asteroid with 100 STAR48 Rocket Motors
29
Is there any point in space that the James Webb Space Telescope would be unable to image?
6
Question: Does JWST have hardware that could be used as a docking fixture by repair spacecraft?
3
Is the inter-manifold transfer of JWST between Sun-Earth L2 and Earth-Moon L1 within the capability of existing propulsion systems?
2
With independent control of attitude and thrust direction, could JWST be kept pointing in a “safe” direction during "towing"?
23
Why didn't JWST include any sensors capable of blue and green visible wavelengths