How do you calculate fuel usage ratio for rocket acceleration vs deceleration using a fixed total amount of fuel?

I get how if I have a desired peak velocity I can work backwards from the destination using the Tsiolkovsky rocket equation and get the required fuel to complete the trip, but in my example I want to use all of the given fuel and derive the delta v. Since I'm applying the equation in two parts, that leaves both mass change and velocity change unknown, and I don't know how to deal with that.

An example using this calculator

If I have this rocket:

Because the fuel mass is reduced, I only need to use 25,247.5 kg of fuel slowing down, leaving me with unused fuel.

There is a ratio of fuel usage on acceleration vs deceleration that will consume all of the given fuel, but I can't find or figure out how to calculate it, can someone help me out?

$m_1$ = The final mass of the craft. Just the payload, all fuel is expended.

In order to accelerate to a given velocity and decelerate back down to zero, you must expend half your delta-V in each burn.

Let's do some sanity checks. If your craft is the size of the Titanic and its propulsion system consists of two firecrackers. Each firecracker is a 'burn' in one direction. Since the overall mass hardly changes between burns, the expended fuel fraction is approximately 0.5.

If your craft is mostly fuel, you will have a high $r$ value. Since most of the delta-V comes from the last bits of fuel in the tank, you have to burn a huge proportion of the fuel to get to halfway. As $r$ approaches infinity, the fuel fraction for the first burn approaches 1. 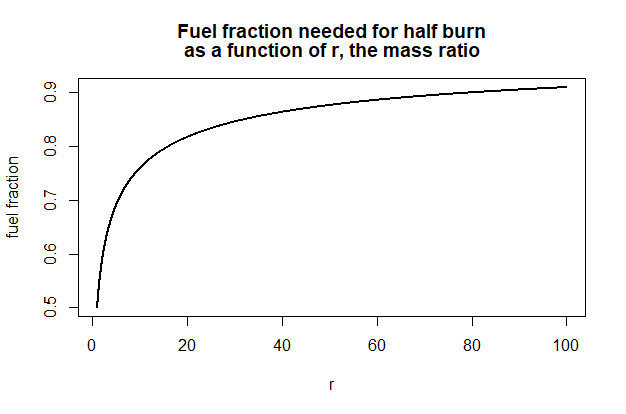 To answer your original question with the numbers you supplied, r = 101, so therefore the fraction of fuel you need to burn to the halfway point is 90.95%

The rocket equation is then:

3
How fast can a rocket with constant thrust but changing mass travel a linear distance with limited delta V?