What is the differences in between SLS Block I and SLS Block 2?

Other than mass to orbit how will the SLS Block 1 differ from SLS Block 2? What differences in construction will be made ?

A big difference is the upper stage.

Current SLS is using the stage from Delta IV which only has a single RL-10 and the next versions will use the Exploration Upper Stage which has 4 RL-10 engines. (Slightly different versions of RL-10 as well, but that is beyond the scope of this answer).

The EUS is taller, and the mount points are different, so it requires updates to the launch table, which has run severely over budget and time.

No doubt there are many more differences, but this is a big one. 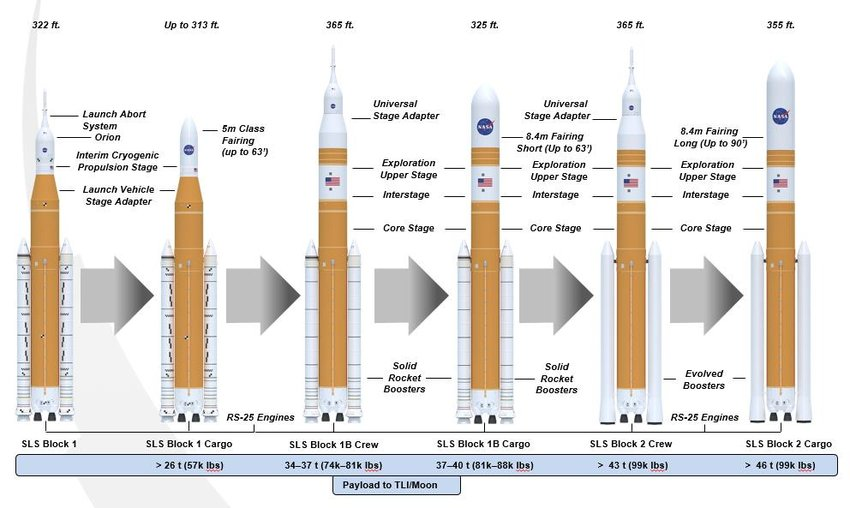 There are two main differences between Block 1 and Block 2, and those two differences coincide with the two major upgrade steps, Block 1B and Block 2.

What geoffc's answer describes is one half of the upgrades and is not the upgrade that is introduced with Block 2. The Exploration Upper Stage (EUS) is already going to be introduced with Block 1B on Artemis 4. As hinted by geoffc, the EUS also requires a new Mobile Launcher with a new tower. As also hinted by geoffc, this new Mobile Launcher is already massively over budget and massively delayed despite the fact that the contractor hasn't even properly started building it yet.

(Most of) the current booster casings are literally casings that have already flown on Space Shuttle. (Some of them are new.) However, since, unlike on the Space Shuttle, the boosters are not recovered and refurbished, the number of flights is limited by the number of leftover booster segment casings. There are enough parts left over to last until Artemis 8, but for Artemis 9 and beyond, new boosters are needed. (It would technically be possible to build new segments, but once you start building them new, you'd rather build them based on the latest advances in technology.)

These BOLE boosters are derived from the ones designed for OmegA, not the Space Shuttle.

Note, however, that it is still not certain whether Block 1B and Block 2 will even be needed. The additional performance is not needed for crew flights. It is only needed for cargo flights or combined crew+cargo flights. However, as of now, the first two cargo missions originally planned for SLS have already been re-assigned to other vehicles: both Europa Clipper and the first two modules of the Lunar Gateway will launch on Falcon Heavy. And as soon as Starship becomes operational and certified for NASA flagship payloads (which will likely be before Artemis 4, i.e. before the introduction of Block 1B with the EUS), there is no actual need for upgraded performance on SLS. (Of course, even though their improved performance is not needed, we still need the BOLEs once we run out of the Shuttle SRBs.)

SLS is simply too expensive to "waste" on cargo. Its existence is justified by it being the only crew-certified super heavy lift launch vehicle, but it doesn't make sense to pay the price for that crew safety on a cargo mission.

11
How will the SLS first stage be supplied with engines? Copy manufacturing the RS-25 or replacing it?
7
How do they simulate the SLS engine environment?
2
Why is there such a long delay in between test firing and launching the SLS engine No. 2059?
14
What are the differences between SLS and Ares V?
8
Why will SLS Block I bring less mass to LEO than the STS shuttle system did?
6
Could the SLS reach orbit without solid rocket boosters?
13
Where are the lost RS-25D Block 2 engines?
3
Is SLS capable of launching the core stage into LEO?