Planetary flybys are used to modify the orbital parameters of spacecraft.

However: what if a tunnel was dug along the flyby path? Then the closest point of the flyby could be even lower, and the deflection angle increased. 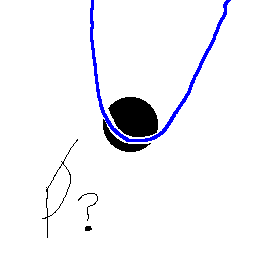 Considering the extreme case, going straight through the centre, a tunnel path offers no deflection at all, where a point mass flyby would in contrast give a full 180º. 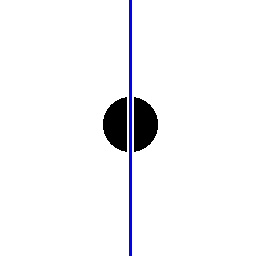 Sub-surface gravity can be found by applying the shell theorem, and assuming uniform density, the force of gravity then becomes proportional to distance $F(r) \propto r$, in contrast to the usual $F(r) \propto r^{-2}$ (as an aside, this law of gravity also happens to have stable orbits, the only other exponent for $r$ to do so. They are however ellipses with their geometric centre instead of a focus at the centre of mass, so it's not immediately clear how to patch them together with the outside hyperbola)

Writing a simple time stepping simulation, I found the deflection angle to indeed be increasing a little when digging tunnels some way into the planet, but then shrink again.

The question then arises: What is the optimal depth for flyby tunnels? Presumably it depends on $v_{\infty}$

The Optimal Depth is Precisely (Almost) No Depth

I solved this problem using a numerical differential equation solver to investigate a range of flyby approach angles. The results are fascinating!

I used the earth as a basis for the investigation. The planet radius is marked in red, and the starting point is near geostationary altitude. I implemented the "tunnel gravity" with a simple Boolean and then taking the mass under the position as the relevant mass.

I plot here 3 different starting velocities and a range of starting angles for each. If you look carefully, you will see that for all three cases the sharpest turning is provided by the trajectory that passes closest to the planet's surface.

Another fascinating result is that the planet acts like a lens! producing a focal length that is dependent on the initial velocity.

I will now admit that this is not a proof (though I think it is quite convincing), but every starting point I tried had the same result (and I tried many more than shown here). I am sure someone could mathematically prove this (and explain the neato lensing behavior), but that person will not be me.

Editing to address further work and comments discussion. On closer inspection, there is very marginal (~0.1 degree) extra turning to be had with a relatively shallow minimum depth (~100 km below ground)

Addendum: Variable Density and a Trench 200 km at Its Deepest

User Uhoh solicited a model for Earth's density model from this question following discussions about the effect this would cause. I integrated the equations to give mass and redid my analysis.

Despite the modern-art aesthetic of these plots, there was very minimal change. The optimal minimum depth did reduce (as expected) but only by about 100 km. The left figure is not useful, I just wanted to include it because I think it's pretty. The middle figure shows a small band of the most optimal trajectories. The best had a depth of 190 km (0.97 Earth radii). The right plot shows a zoom of the middle and reveals that a 190 km deep trench would be, in fact, pretty deep.

The effect seems to be quite subtle, only increasing the deflection angle by a fraction of a degree at shallow depth.

For a unit mass, with unit radius, the optimal depth (found by hill climbing) seems to be dependent on the $v_\infty$ (velocity at infinity)

At sensible velocities, the depth tapers off with the velocity and is pretty close to 1. 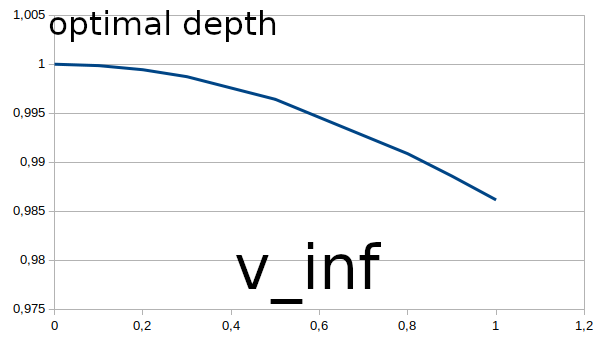 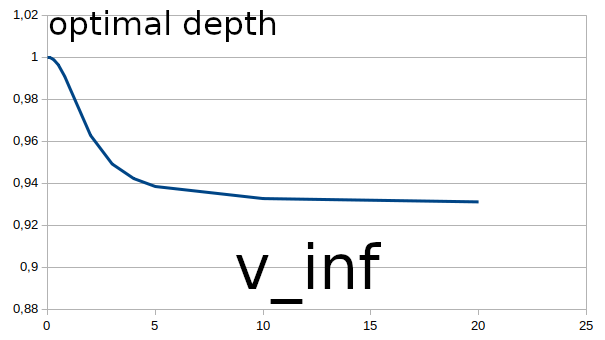 But until anyone actually does the math there doesn't seem to be much more insights to get from simulations.

17
Why are all trajectories in space a conic sections?
5
Planet Orbit "swept Area" Vs halo orbit "swept area"

17
How to calculate Delta V for lunar flyby
16
What pushes a spacecraft during a flyby?
4
Calculating the periapsis radius of a flyby manoeuvre without knowledge of the eccentricity of hyperbolic trajectory
18
Is the Flyby Anomaly still a thing?
4
How is flyby distance estimated?
3
Why is the bend angle of a hyperbolic trajectory giving different results?
1
Deep space marksmanship; will DART's intercept and impact trajectory represent the best ever if successful? If so, by how much?
2
How does one design a trajectory involving a lunar and Earth flyby and Lagrange points? What tools are used to calculate the initial guesses?