If we used the best current technologies that people are willing to use. How long would a mission to the Oort Cloud take? Let's assume that we want the probe to be able to send us back data once there.

Using 2000 AU as the distance to the inner edge of the Oort cloud, a probe travelling at 95 km/s could reach it in a century. FWIW, that's over 3 times Earth's orbital speed.

We normally use multiple gravitational assists to get high speeds, but that takes time. The current speed record holder is the Parker Solar Probe which will reach a maximum speed around 192 km/s at perihelion, after 7 Venus flybys, taking 7 years.

The name Oort Cloud is a little misleading. As mentioned on https://astronomy.stackexchange.com/q/254/16685 material in that region is very sparse. It makes the main asteroid belt look positively crowded. As I said here, the mean distance between main belt asteroids of diameter 1 km and larger is around 1,000,000 km (2.6× the distance between the Earth and the Moon). I have some more info on asteroid size distribution here.

It's also extremely dark that far from the Sun. By the inverse square law, the sunlight at 1 AU is 4 million times brighter than what it is at 2000 AU. Of course, when you're in the Oort cloud, nearby objects are 4 times brighter than what they are to telescopes near Earth, but that doesn't help a lot. A probe in the Oort Cloud will need to use very long exposures to see anything. However, our probe is travelling at 95 km/s, which makes long exposures tricky.

The probe has to send that data back to Earth. So it needs to have a powerful transmitter and a robust power supply. Typically, deep space missions use a radioisotope thermoelectric generators (RTG), which supplies heat as well as electricity. However, the most common RTG fuel is plutonium-238, which has a half-life of ~88 years. There are other fuel options, like americium-241 and curium-250, which have much longer half-lives, but also lower power densities (around 1/4 that of plutonium), so the RTG needs to be correspondingly more massive.

So yes, we probably could send a probe to the Oort Cloud, but it would be very hard to raise the funding for such a long-term project, and the prospects of getting good quality data from it aren't encouraging.

That figure of 95 km/s is the mean speed of the probe relative to the Sun, rounded to two significant figures. Its initial speed needs to be a bit higher to compensate for the Sun's gravity, but it will spend most of its journey travelling at close to the mean speed.

The probe is on a hyperbolic trajectory. As it moves away from the Sun it gradually converts some of its kinetic energy to gravitational potential energy, in accordance with the vis-viva equation.

It's convenient to work in units of AU and (Gaussian) years. (The Gaussian year is almost 10 minutes longer than the Julian year, and about 20 minutes longer than the Gregorian and mean tropical years). In these units, the gravitational parameter of the Sun is $4\pi^2$, and a body (of negligible mass) in a closed solar orbit with semi-major axis $a$ has a period $T=a^{3/2}$. A circular orbit has a speed of $2\pi/\sqrt a$; the escape velocity is $\sqrt2$ times that circular orbit speed.

We could send our probe out to the Oort cloud at the Earth escape velocity (~42 km/s), but it'd take over 5145 years to reach 2000 AU! If we're really patient we could send it off at a slightly lower speed, it will travel in an extremely eccentric elliptical trajectory and eventually return to Earth, after another 5145 years. That has the benefit that the probe will be moving slowly when it reaches the Cloud, but who can wait that long? :)

v_final is its speed at 2000 AU, which is only 5 m/s faster than its asymptotic speed at infinity.

Here's a graph of its speed over distance. As you can see, it loses most of its excess speed quite early in the journey. 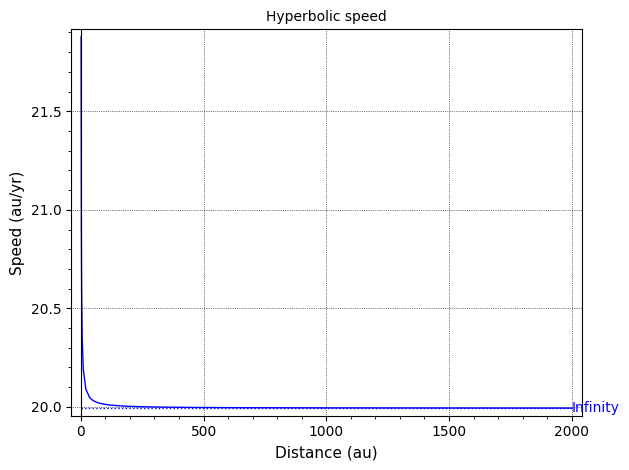 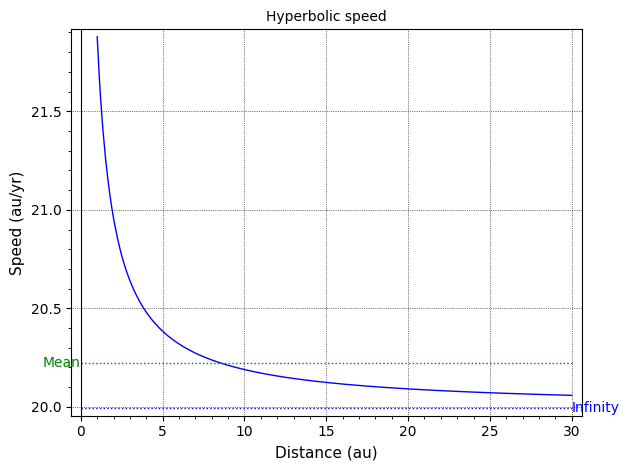 Here's my plotting script. The k parameter is the speed relative to Earth's mean orbital speed, so it needs to be $\ge\sqrt2$.

By way of comparison, here are the mean speeds for 2022 of a few probes:

21
How could we observe the Oort cloud, if it exists?
11
Finding non-lit objects at light minute ranges
11
Could there be liquid hydrogen oceans on the surfaces of worlds (including frozen gas giants) in the distant Kuiper belt or Oort cloud?
10
Is Voyager 2 capable of proving the existence of Oort cloud?
0
How long would it take to send a probe to the Oort Cloud