Why does lunar gravity decrease?

I was exploring some queries about the moon and came across the question Which artificial satellites in lunar orbit are currently active?. In this, the accepted answer says:

The lunar gravity field varies by as much as 1%.

I want to know why lunar gravity is not constant as Earth's is.

The Moon's gravity does not "decrease". The Moon is not of uniform composition. It contains a variety of materials. The different materials have different densities. These materials are not uniformly distributed. So, the gravity field around the Moon is not uniform. If you imagine a sphere of some radius exactly centered on the Moon's center of mass, gravity will not be the same at all points on the sphere. At any given point, it is constant over time, just not necessarily the same as all other points on that sphere. So, any object orbiting the Moon is not going to travel in an ideal elliptical or circular path. It will be perturbed by the irregularities in the Moon's gravity field. These effects can add up quickly, so a Lunar orbiting satellite has to make frequent adjustments to maintain an orbit.

The farther away you get from the Moon, the less significant those irregularities become, but you don't have to go very far before another factor takes hold: the Earth.

The Earth also has an irregular distribution of mass, so Earth orbiting satellites also have to contend with similar perturbations, but to a smaller degree. The GPS satellites have to account for these perturbations. Although they don't have to make adjustments to their orbits very often, the paths of the satellites are affected enough to impact system accuracy if not factored in to the descriptions of their trajectories.

The answer appears to be mascons. "Mascons" is short for "Mass concentrations", which are regions of a celestial body where there are anomalies in density, which lead to abrupt changes in the local gravitational field of the body. They can even impact lunar satellites. 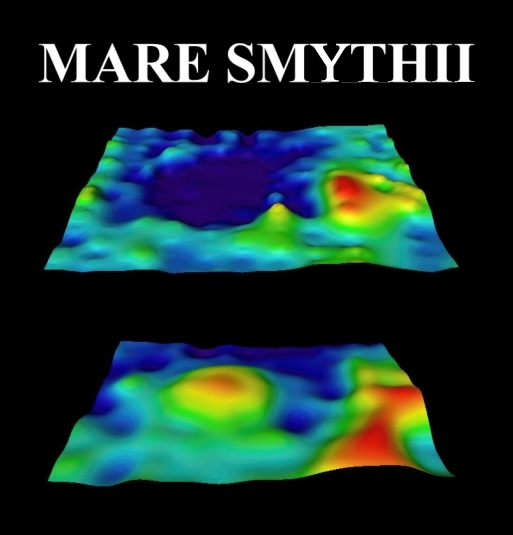 Mascons may be formed by subsurface processes, such as changes in the Moon's crust following an impact with another small body. Hypothetical sub-surface lava flows are another explanation. However, the impact theory has gained more support, in part because of the high frequency in impacts on the Moon.

You can read more about mascons here and here.

First off, gravitation from the Earth is not quite as uniform as you think. It varies by about 1/2 of one percent.

While the Earth is not nearly as massive as Jupiter or Saturn, it is still more or less "spherical." While the gravitation deviations from that predicted by an ellipsoidal Earth are important to finding oil or minerals, they are rather small. The deviations of gravitation on the Moon from an ellipsoidal Moon are huge in comparison. Comets such as 67P/Churyumov–Gerasimenko and 25143 Itokawa provide even more extreme examples. The gravitation from these objects only looks spherical from a large distance (any finite-shaped object looks like a point mass from a sufficiently large distance). Close-up, gravitation from a comet is anything but spherical because they are so lumpy.

Not the answer you're looking for? Browse other questions tagged the-moon gravity or ask your own question.

26
Which artificial satellites in lunar orbit are currently active?
0
why dont space debris fall on earth or roam in universe

8
Gravity Assist - Orbiting Satellites & Speed Increases
8
Constant lunar sub-surface temperature
2
Which perturbs LEO satellites more, the Moon's gravity directly, or the changes in Earth's gravity field due to the Moon?
1
Gravity Model measurement technique
3
When calculating the future orbit of an artificial Earth satellite, is the Moon's gravity significant or insignificant?
1
What are the calculations for gas transport to the Moon with a pipeline?
8
How do stable equilibrium points work in GEO? If all geosynchronous spacecraft suddenly lost stationkeeping, would most "fall into" one or the other?
20
Escaping moons conflict with what I understand of gravity
8
What does the Moon's gravity feel like? If you don't move, could you still tell you're on the Moon?