Is 2001: A Space Odyssey's Discovery One still a plausible design for interplanetary travel? 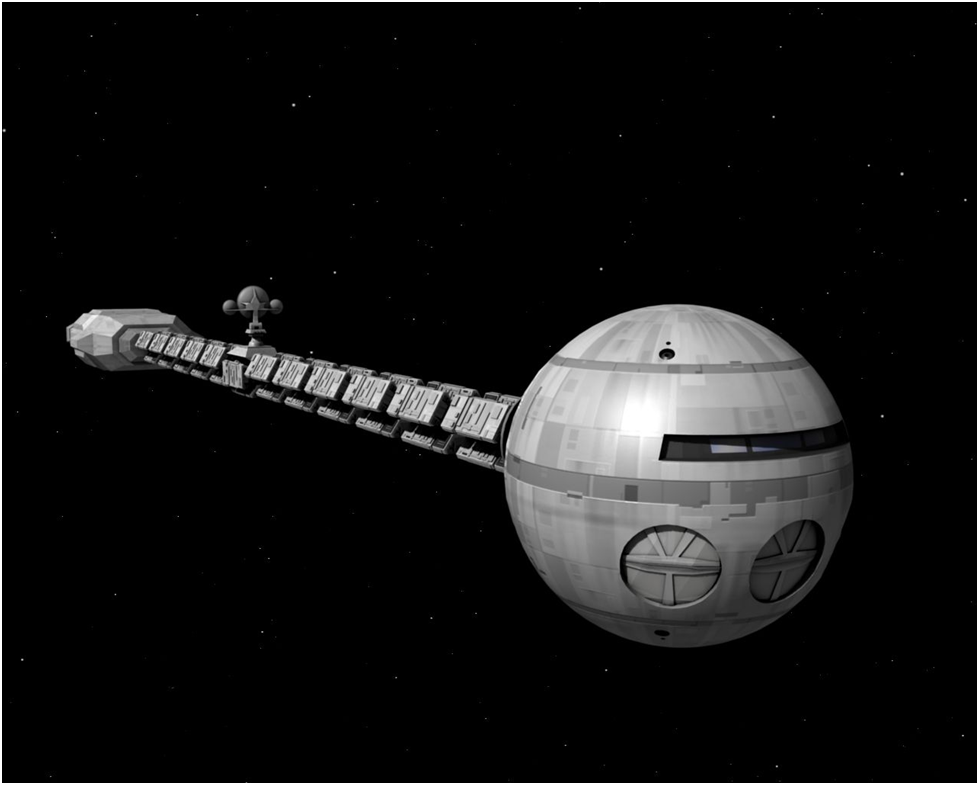 A half century later, is there anything about Discovery One which seems outlandish? What would be done differently if an interplanetary ship was designed with present-day knowledge and technology?

Considering that the film was made before humankind first set foot on the Moon it is a fictional technological triumph and if you create something like that it should age well. And it has aged far better than most.

But as with any film there are a number of things which were specifically included for the purpose of the plot which are simply not the way things would be done.

The pod bay is not a practical spacecraft design. Why is it necessary to rotate the pods inside the bay? why are the pods inside the ship and not docked with it? why have a design that requires such a vast airlock to be pressure cycled every time anyone wants to use a pod?

A lot of the equipment in that long thin ship might be better arranged as additional radiation protection around the central crew habitation area.

Some skepticism about HAL9000 has been brought up by comments and other answers, but I think that creating a system like HAL9000 would be possible today (although it would look very different on a hardware level). This is because HAL is never explicitly stated to be sapient, only that it can pass Turing-test-esque testing.

HAL9000 is often portrayed as being a villain and painted as evil--particularly in the movie--but in the book, it is explained this perceived "evilness" comes from conflicting orders and poor programming. The first of these orders is to relay information accurately, while the second is explicitly to lie to the crew members about the true purpose of the mission. When these two command imperatives conflict, aberrant behavior occurs, and I don't think that this is unrealistic. HAL then "decides" that it doesn't need to lie to the crew members if they are dead (which is true), so that's why it decides to get rid of them by killing them.

In my opinion, the blame for HAL's failure lies squarely on the programmers or those who configured the system that resulted in conflicting priorities and apparently not prioritizing crew being kept alive.

The big question about feasibility of creating a HAL9000-esque system is "Can the AI perform the reasoning step of 'I don't need to lie if all the crew are dead'?" and I'd give it a 50/50 shot considering today's cutting edge AI research.

All that said, I don't think such an AI is a good idea for integrating with fundamental spacecraft systems. Most, if not all, functions of a spacecraft can be programmed in a robust, deterministic fashion which can mathematically be proven to be "bug free" as piloting and operating a spacecraft is surprisingly simple for a computer compared to something like speech recognition.

I suspect the only "AI" we will see in spacecraft in the near future are discrete trained and "baked" neural models that are capable of performing extremely specific constrained tasks where perfect accuracy is not required.

A sphere is entirely the wrong shape for centrifugal gravity. In order to maximize the usable floor space, you want to have a cylindrical shape running in the same direction as the axis of rotation.

There are basically two options for how to spin a ship such as the Discovery to generate gravity. One is the one we're all familiar with: roll around its primary axis. Discovery is probably too small for this to be practical, however. Because the distance between the axis of rotation and the outer hull is so short (I would estimate probably no more than 10-20m based on the prop shown above) you would have to spin it quite quickly to generate useful amounts of gravity. High rates of rotation cause very noticeable Coriolis effects that lead to disorientation. (You can see a brief overview of the subject, and a useful calculator for speed vs. radius vs. artificial gravity output, here.)

The other option is to pitch relative to the ship's path of travel, spinning "end over end". This requires that the two lobes of the ship have roughly equal mass, but since you've put the heavy nuclear reactor at one end and the heavy life support equipment at the other, that's probably not too burdensome. And because the crew section is quite a bit further from the axis of rotation in this configuration, it's easy to generate plenty of gravity with a relatively sedate rotation speed. The issue is, the direction we're used to thinking of as "forward" becomes "down" - the nice panoramic picture window and the pod bay doors on the shooting model would be on the floor!

While using centrifugal gravity is a nod towards realism, ultimately the design of the Discovery wouldn't be very practical for it.

While ~~cruising~~ accelerating at 1.5g for almost four years the ship looked like a normal space ship. When it got to its destination the engines section is separated from the lab and crew section using a set of cables and start rotating around the center of gravity to create artificial gravity.

This thread shows some animation of how it works and the book contains some calculations about the details.

8
What happens if you jump on a "spin ship"?