How will the SLS first stage be supplied with engines? Copy manufacturing the RS-25 or replacing it?

The SLS is a very opinionated subject among bloggers. I'm looking for what substance there might be behind the following general claim (without specific source). Is it truthful and if so, what is the official plan concerning it:

"The SLS will reuse Space Shuttle Main Engines (SSME), but they are currently not manufactured and there are only 16 of them in storage. Since each SLS launch consumes 4 of them, the SLS only has a lifetime of 16/4=4 launches altogether."

Some changes appear to be under consideration for future production of SLS RS-25s:

From Wikipedia's SSME page, about the SLS plan:

Once the remaining RS-25Ds are used up, they are to be replaced with a cheaper, expendable version, currently designated the RS-25E ('E' for expendable). This engine may be based on one or both of two single-use variants which were studied in 2005, the RS-25E (referred to as the 'Minimal Change Expendable SSME') and the even more simplified RS-25F (referred to as the 'Low Cost Manufacture Expendable SSME'), both of which were under consideration in 2011.

Engines at the size and performance of an SSME are very difficult to develop.

The SSME has one of the highest ISP's ever attained in a production engine. (Not some crazy Fluorine involving demo). It is anything but a simple, or even 'old' engine. Its re-manufacture would likely benefit from modern techniques, like the people examining starting F-1 engine rebuilds.

It has been estimated (I have no source, only what is usually quoted) to take 6-10 years to develop a large engine.

The closest comparable (LOX/LH2) engine is the RS-68 used by the Delta 4 booster but was rejected because the heat load under the first stage, surrounded by the SRBs was unsurvivable by the RS-68. (Whereas the SSME was always designed to be 'near' the SRBs during launch. I say 'near' since of course, on the Shuttle they were offset being on the back of the orbiter, not directly between as they would be on SLS)

Is it rational to restart SSME production? Maybe. It is a well understood, mature engine, that might benefit from moderm manufacturing technologies. It is a very advanced engine with excellent performance. It has been pointed out in the comments that some of the newest engines of that remaining set of 16 were manufactured as late as 2008.

I have this graphic of which SSME was used on which STS flight. 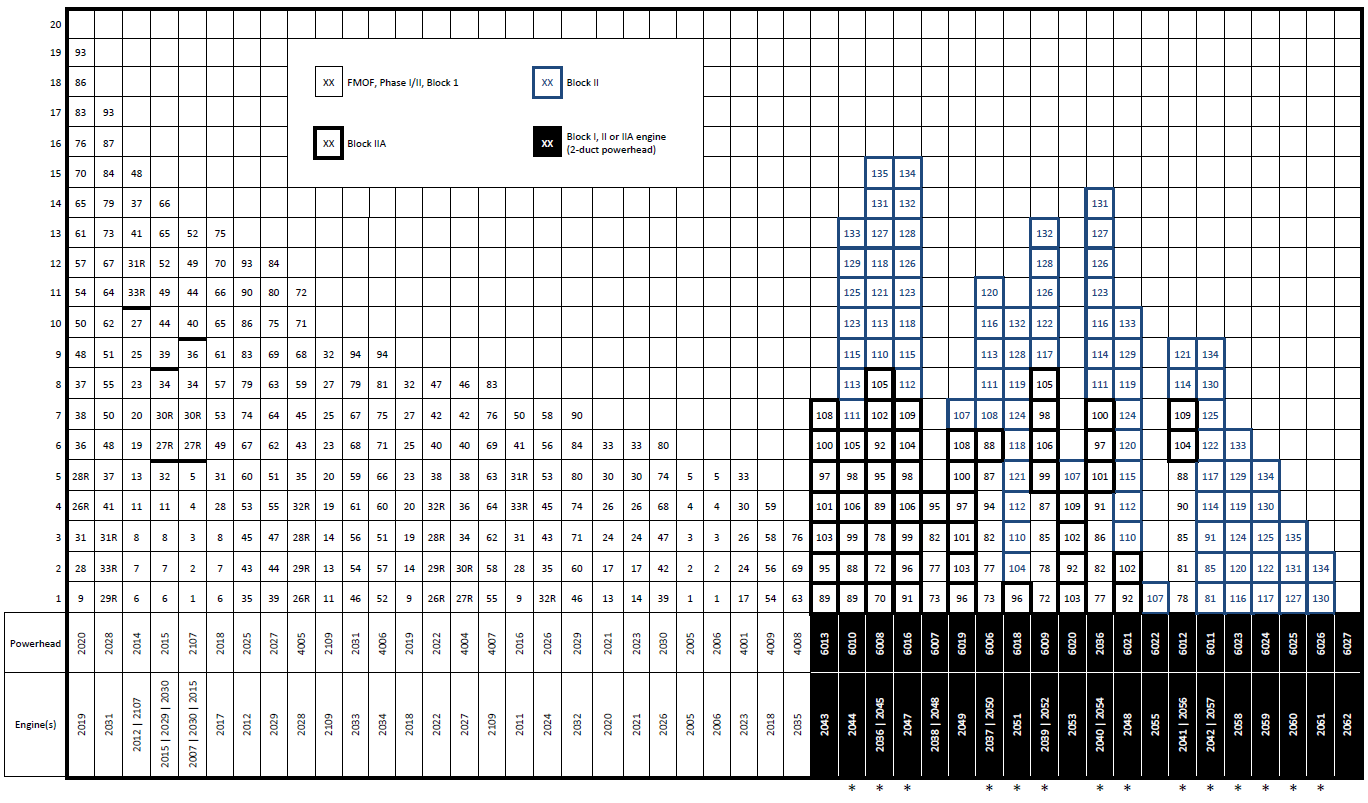 How expensive would a new engine be? Very. It would require performance similar to the SSME, else the size of tanks or # of engines would cascade rippling changes throughout the entire SLS stack probably killing it.

The SSME was quite expensive and something comparable to it would be similarly hard to develop.

Any ready replacements? Nothing really. The RS-68 is the closest and already rejected. Would a Russian engine be accepted? Not sure there is an appropriatly sized LOX/LH2 Russian engine on the shelf. The Russians have been great at BIG Kerosene engines. (RD-170, RD-180, RD-193) But LH2 mechanics at the large scale have usually caused them issues.

The Ariane 5 Vulcain main engine might be an interesting idea, as it currently runs beneath the A5 main stage with an SRB on either side of it, but I would guess the sizing is wrong.

Having said all that, it seems like more reason to consider SLS less of a great option.

8
How does a launch vehicle control its trajectory during the first stage?
7
How will the SRBs used by the SLS differ from those used by the Shuttle?
7
How do they simulate the SLS engine environment?
11
Could the solid boosters of SLS be replaced by reusable Falcon 9 first stages?
3
Is SLS capable of launching the core stage into LEO?
5
Will the Artemis I SLS do a static fire on the pad following rollout?
21
How much of the second SLS has been built?
6
Does the SLS mobile launch platform share any hardware with STS or even Saturn I/V MLP?
10
Will SLS be launched as often as the space shuttle was?