Please watch 45 seconds of this demonstration performed by no one less than Wernher von Braun himself! https://www.youtube.com/watch?v=1ZImSTxbglI#t=1800

The numbers along the illustrated ellipse between Earth and the Moon are obviously in units of hours travel time from/to LEO. So that makes no physical sense. According to the illustration in the movie, the slowest speed is in lunar periapsis. The fastest speed at the nodes (minor axis end-points) of the ellipse. And this about 350 years after Johannes Kepler had proven that the opposite is true.

Yes, it is a Disney movie. But an educational documentary one, in this part at least. And purportedly, Wernher und Walt were personally good friends. Why make this mistake in public? Or is it I who make a fool out of myself now?

Old Wernher got it right. Of course. It all makes perfect sense, at least the transit to the Moon part and the relative velocities.

I calculate 121 hours for half of an Earth orbit with a periapsis 400 km above the equator and an apoapsis 100 km (60 mi as he stated) above the far side of the Moon.

At apoapsis, the vehicle will be going about 0.2 km/s in the Earth frame. The Moon is going about 1.0 km/s around the Earth. So for the vehicle to encounter the Moon, it will need to be ahead of the Moon, and the Moon will catch up to it from behind at 0.8 km/s.

The velocity at Earth closest approach is close to 11 km/s, so yes, as Wernher describes, the speed is slower at the Moon and faster at Earth. Much faster.

If you like, you can then correct for the Moon as a perturbation using patched conics, considering the Lunar flyby as a hyperbolic pass with a $V_\infty$ of 0.8 km/s, the difference between the vehicle velocity and the Lunar velocity. In the Lunar reference frame, the initial and final velocities at $\infty$ have the same magnitude, but different directions. When that is converted to the Earth frame, it will result in a $\Delta V$ to the vehicle which will cause it to depart from the initial Kepler orbit about the Earth.

Here's what the trajectory actually ends up looking like in the Earth frame, where the trajectory is orange and the path of the Moon is blue (Earth is at 0, 0): 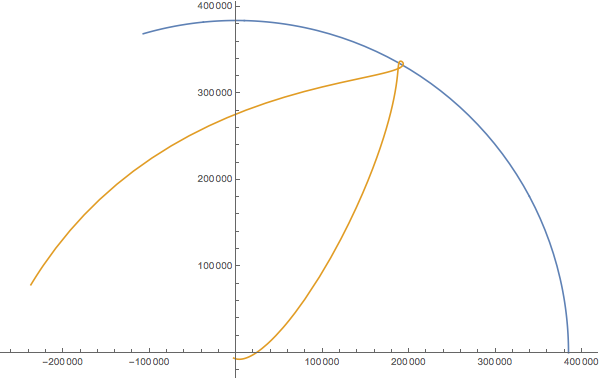 After that close lunar flyby on the far side, the vehicle is in a much larger orbit of Earth with an apoapsis almost ten times the distance of the Moon. So Wernher didn't have the post-flyby state correct. The orbit he showed is what would happen if the Moon weren't there when you got to apoapsis.

Over most of the flight, Earth's gravity dominates, so what you're referring to as lunar periapsis is better thought of, for Keplerian purposes, as Earth apoapsis, and so is rightfully the slowest speed. The highest speeds shown are at the minor axis endpoints, but in order to reach the first of those after ~15 hours, and the far point of the ellipse at 121 hours, you must be going quite a bit faster in the first leg of the journey.

They didn't have computers readily available at the time. I think they used an earth orbit for this simplified illustration, because you can calculate it by hand. They could have used patched conics, but it really doesn't matter for this kind of presentation.

This may be a going out on a limb, but it may point to von Braun's ability to use "good enough" solutions for a set of requirements instead of over-engineering.

To answer the question, Wernher von Braun was very aware of the mathematics of the two body problem. You can read about this in "First Men to the Moon", where he suggest that the moon mission may have to carry a large set of course correction maneuvers stored on magnetic tape, because he expects the computers to be too big to fit on a spacecraft.

Not the answer you're looking for? Browse other questions tagged orbital-mechanics history n-body-problem or ask your own question.

1
Do Kepler's laws of planetary motion apply also to satellites of the Earth?
16
Did NASA muzzle Wernher von Braun during the moon landings?
8
Did von Braun have "a thing" for fins? Why did Saturn I block 2 get fins because it's a "von Braun" rocket?
9
Did Wernher von Braun really have the "Saturn V painted as the V2"?
4
Did von Braun ever have issues with the imperial unit system?