What exactly, is meant by Diurnal signature of the earth and how does it aid line of sight range and range-rate data to give angular information of the spacecraft state?

This is necessarily a short answer, I don't doubt there will be other more extensive answers later.

The location of a spacecraft in space is changing due to gravity forces and perturbations from drag and solar pressure.

The location of DSN stations in inertial reference frame is not constant either. Earth's orbital motion is the first component to consider.

Over very long time intervals, DSN stations drift with the continents they are located on, thus their longitude and latitude may be changing.

Attitude of the Earth relative to far away stars includes three more components: 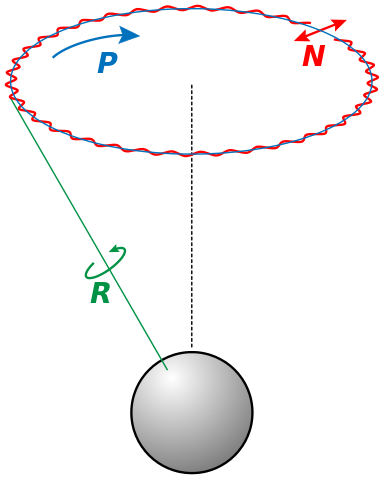 DSN maintains a highly accurate and up-to-date model of Earth's orientation in space (based on Very Large Base Interferometry - observations of differences in arrival of signals from distant quasars to different DSN stations).

Range and range rate (Doppler) data acquired from spacecraft are dominated by the rotation of the Earth and errors in UT1 are the most critical.

Diurnal signature of the Earth is thus the mathematical model of our Earth's orientation/rotational speed relative to an inertial reference frame with all its wobbly components that should be subtracted from raw Doppler shift observations to get true spacecraft coordinates after a few more calculations.

Not the answer you're looking for? Browse other questions tagged navigation deep-space ground-station ground-track or ask your own question.

5
Range Measurement from Range signal downlink
2
Ground tracking : converting TLE to another format
5
How can a deep-space spacecraft determine in real time the direction of delta-v?
3
How have/how will Indian ground stations be used for comms or tracking of deep space spacecraft?
7
Where are earth stations typically located?
3
First interplanetary launch from California! How far from Earth will InSight be when it separates from the Centaur 2nd stage?
5
Why doesn't New Horizons have a tracking function
1
If the Earth spun clockwise, would Florida have still satisfied the requirements for the US launch center in the 1960's?
4
Difference between collecting satellite data and tracking its position